Is Sugar Ray Robisnon the greatest boxer of all time? For ALL time?

During the long rich history of professional boxing, there have been many outstanding elite prizefighters. Some of the best of the best include all time greats like Sam Langford, Harry Greb, Henry Armstrong, Muhammad Ali, Joe Louis, Ezzard Charles, and of course, the great Sugar Ray Robinson. Many if not most observers do view Sugar Ray as the greatest boxer of all time, although there are certainly some valid dissenting opinions. 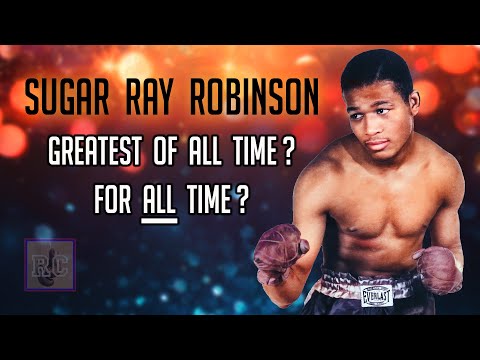 Sugar Ray Robinson’s boxing accomplishments are simply extraordinary, in fact, even legendary. To start with he had a decorated undefeated career as an amateur. He was undefeated during his professional career at welterweight, and he was the undisputed welterweight world champion. His only loss in his first 130-something fights came when he was a welterweight facing a middleweight, Jake LaMotta, whom Robinson beat in five out of their six encounters during their legendary rivalry, including the bout where he first won the middleweight world championship. In over 200 professional contests, Sugar Ray was only stopped inside the distance once, against light heavyweight champion Joey Maxim, in a bout Ray was winning before succumbing to exhaustion in the sweltering heat in round 13.

When Robinson originally retired, his professional record stood at 132 victories, with only 3 defeats and 2 draws. After 3 years out of the ring, Ray ended his retirement and made a comeback where he won the undisputed middleweight world championship an additional 3 times, when he was clearly well past his best. In total, Robinson was a 5 time undisputed middleweight world champion. In total, Robinson faced a dozen fellow Hall of Famers where his record was 21-7-1. It was simply an extraordinary career for Robinson.

Is Sugar Ray Robisnon the greatest boxer of all time? For ALL time?

This edition of Rummy’s Corner will attempt to answer both of those questions. Please watch and enjoy the video for one person’s take. This is Rummy’s Corner.