By Dan Ambrose: Vergil Ortiz Jr. says he wants his title shot against welterweight champion Terence Crawford or Errol Spence Jr. after he deals with #5 WBO contender Michael McKinson on August 6th at the Dickies Arena in Fort Worth, Texas. The fight will be shown live on DAZN

Ortiz (18-0, 18 KOs) is ranked #1 with the WBA, WBC & WBO at 147, and he feels he’s ready to challenge for a world title now. His promoters at Golden Boy Promotions aren’t holding the 24-year-old Ortiz back, and that’s a good thing because his chances of a big payday will disappear once Crawford & Spence move up to 154.

Capturing one of the soon-to-be-vacated welterweight titles won’t bring in the same kind of money for Ortiz that he’d get fighting Spence or Crawford.

There’s nothing for those two champions to gain fighting Ortiz because he doesn’t have a huge fan base, and brings nothing to the table for either of them.

Instead of fighting one of those popular champions for a belt, Ortiz would be stuck facing Jaron ‘Boots’ Ennis or David Avaneysan.

The money Ortiz can make fighting either of those guys for a vacated belt, and the risk would be very high for him if he winds up battling Boots Ennis.

You can argue that most boxing fans would pick Boots over Ortiz, and it won’t be surprising Ortiz’s promoters at Golden Boy do all they can to make sure he doesn’t wind up facing him for one of the vacated belts.

“Michael McKinson is ranked with the WBO, he’s undefeated and it would look good on my resume if I beat him,” said Vergil Ortiz Jr.on Friday during the virtual roundtable to talk about his August 9th fight against Michael McKinson.

“I want my shot against whoever. It honestly doesn’t matter to me,” said Vergil Jr. when asked which of the champions at 147 that he would like to fight.

“Overall, I’m 100% now, we’re ready to go and do what we do best. I really want to get back in the ring now. By the time I fight in August, it’ll be almost a whole year

“I would love to fight twice this year and be even busier the following year. I was very disappointed that I didn’t get the fight, especially since I found out that I wasn’t able to go on literally the week of the fight,” said Ortiz about him pulling out of his March 19th match against McKinson.

“It’s not like I wanted to waste a whole training camp and months before that. He fought someone with a completely different style than me, so you can’t really base off of that. But I’m aware of how he fights, and it was a recent fight. We have a little more tapes to go off of him,” said Ortiz Jr. about McKinson. 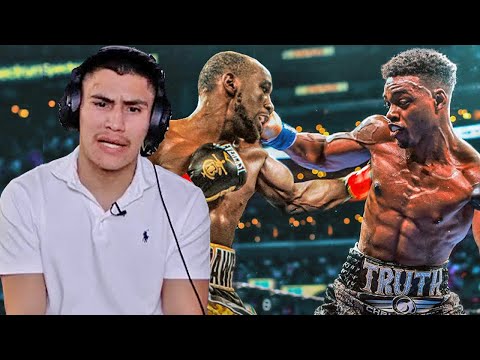