By Adam Baskin: Two-time Olympic gold medalist Robeisy Ramirez weighed in successfully at 125.8 lbs, and his opponent Abraham Nova came in at 125.4 lbs at Friday’s weigh-in for their 10-round fight on Saturday night at Madison Square Garden in New York. The event starts at 10:00 p.m. ET on ESPN and ESPN+.

Ramirez (9-1, 5 KOs) is a blue-chip amateur prospect from Cuba who dominated everybody before becoming professional.

He capped off his second Olympic gold medal in 2016 by defeating Shakur Stevenson if the U.S, leaving the New Jersey native in tears.

Top Rank is putting the 28-year-old Robeisy in deep waters by matching him against the undefeated Nova (21-0, 15 KOs), who is one of the best fighters in the 13o-lb division.

The Puerto Rican native Nova is coming down in weight from super featherweight to battle Robeisy on Saturday night in the co-feature bout on the Artur Beterbiev vs. Joe Smith Jr. card.

Nova looked drained and skeletal at Friday’s weigh-in, and one could tell he was below his natural weight class. We’ll see on Saturday night if Nova’s performance is off from his weight loss.

“Shakur Stevenson is a pound-for-pound #1 type guy, and Ramirez beat him in the amateurs for the [Olympic] but had a hard time making the adjustment to the pros,” said Max Kellerman to ESPN about the talented Robeisy Ramirez, who captured two Olympic gold medals representing Cuba in the 2012 and 2016 Olympics.

“He lost his pro debut, but since then has been coming on. Nova is his best guy he’s probably fought. He’s undefeated. What do you think of the match-up?” 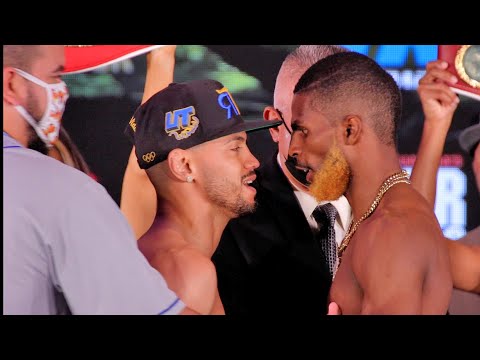 “I think this is going to be a testament to the amateur pedigree,” said Tim Bradley. “You’re always talking about amateur pedigree and how important it is in boxing to have vs. a guy that does have some amateur [Abraham Nova], but he does have more professional experience than Robeisy Ramirez.

“So, we’re going to see which one comes to the forefront. I’m going to say, I favor Robeisy Ramirez. I think he does a little bit more inside the ring. I think his counter-punching ability is going to give Nova problems.

“Nova is a tough guy and can punch with a little bit of volume from the outside, but when you’re able to punch in between those shots,” said Bradley.

“Nova has a tendency to slap with the hook, has a good right hand, and is a guy that can certainly handle himself,” said Kellerman about Abraham Nova.

“He’s not a slouch, but he’s never hit the heights that Ramirez has hit in his career, amateur or pro. So far, this is Ramirez’s best opponent, I would say.”

“Without question, this is his best opponent, and I expect him to showcase and look fantastic,” said Bradley about Robeisy.