Thurman bitter at not getting title shot at 147, might move to 154

By Sean Jones: Keith ‘One Time’ Thurman is bitter about being locked out by 147-lb champions Errol Spence Jr. & Terence Crawford, unable to get a title shot against either one of them, and his age marching forward.

It was only four years ago that Thurman (30-1, 22 KOs) was considered the #1 welterweight on the planet following his wins over Danny Garcia & Shawn Porter.

There are rumors that Thurman could  be challenging WBA ‘regular’ welterweight champion Eimantas Stannionis (14-0, 9 KOs) for his belt in October.

If Thurman were to win that fight, I don’t know that he would; he would hold the WBA’s less prestigious secondary title in the 147 division.

Considering how brutal that fight would be for Thurman and little interest boxing fans would have in seeing him fight the little-known Stannionis, it’s hardly worth the trouble.

It’s believed by some fans that the ‘regular’ WBA belt is essentially a trinket belt that is being phased out by the World Boxing Association, and even if Thurman bests Stannionis, he won’t be seen as the champion.

As a result, old ‘One Time’ can blab all he wants how he’s a world champion after that fight, but he won’t be viewed as one. The WBA secondary title might as well be an interim job because it has very little value compared to the one held by the real champion Errol Spence.

Unfortunately, injuries and extended periods on the shelf have led to Thurman losing his #1 perch at 147, and he finds himself trapped without a chance to regain his top spot by fighting Crawford or Spence for their belts.

Unless something happens soon, Thurman will be forced to move up to 154 and take his chances against the killers in that weight class.

Sean Jones can only imagine the punishment the smallish 5’7″ Thurman would endure going up against the 6’6″ Sebastian ‘Towering Inferno’ Fundora or the knockout artist Tim Tszyu at 154. Going up against those guys would age Thurman.

“Thurman wants belts, and if he can’t get one at 147, I might have to move up,” said Keith Thurman to PBC Podcast, complaining about not getting a title shot against champions Terence Crawford and Errol Spence Jr.

With the aging 33-year-old Thurman’s options looking dim at 147, he’s considering a move up to 154 to go after the four straps held by undisputed champion Jermell Charlo.

You can argue that the Thurman we saw defeat Danny Garcia & Shawn Porter would be too talented for Jermell and take his titles from him.

However, with Thuman having fought a measly three times in the last five years since 2017, it’s questionable whether he’s sharp enough to defeat Jermell Charlo, but he’s got to try.

The 33-year-old Thurman says he might move up to 154 if he can’t get a shot at one of the welterweight titles because he’s NOT happy waiting for the four titles to be fragmented when Spence & Crawford vacate them to move up in junior middleweight.

“For two champions, Errol Spence and Bud Crawford, to be holding onto all four belts right now, it hurts the welterweight division as far as making some of the most exciting fights.

“I believe a lot of fighters could be champions if there weren’t an Errol Spence and Bud Crawford currently holding onto all the belts. If all the straps were free-floating out there, we’d have a lot of young champions,” said Thurman.

As the saying goes, ‘what goes around comes around,’ and it appears that Thurman is getting a taste of his own medicine when it comes to being locked out by unified welterweight champion Spence (28-0, 22 KOs).

Way back in 2016 & 2017 when Spence wanted a world title shot against then WBA 147-lb champion Thurman, he was put off by the Florida native. In hindsight, that was the wrong thing to do for Thurman to do because you could tell even then that Spence was going to be a superstar one day.

For Thurman to turn down a fight with Spence back then, he burned his bridges with the young fighter, and now he’s getting paid back.

While Crawford might throw the aging Thurman a bone, I wouldn’t bank on it. Even if Crawford beats Spencce, he’s likely to move up to 154. 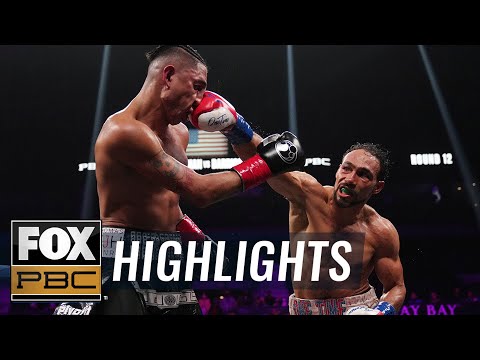