By Mark Eisner: Jaime Munguia (40-0, 32 KOs) stayed unbeaten with a fifth-round knockout win over Jimmy ‘Kilrain’ Kelly (26-3, 10 KOs) on Saturday night in a catchweight match at 165 on DAZN at the Honda Center in Anaheim, California.

Kelly was giving Munguia pure grief through the first four rounds, and it looked like he had his number going into the fifth. 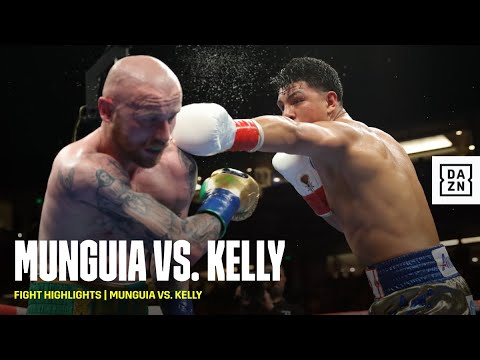 However, Munguia caught the 29th-year-old Kelly with a hard left hook in round five to put him down on the canvas.

After Kelly got back up, Munguia knocked him down with a brutal uppercut to the head. It was a good punch, and it’s understandable why Kelly went down.

At that point, Kelly’s punch resistance was totally gone, and he would have gone down from almost any shot.

Moments later, Munguia knocked Kelly down for the third time in the round, which caused the referee to step in and wave off the fight. 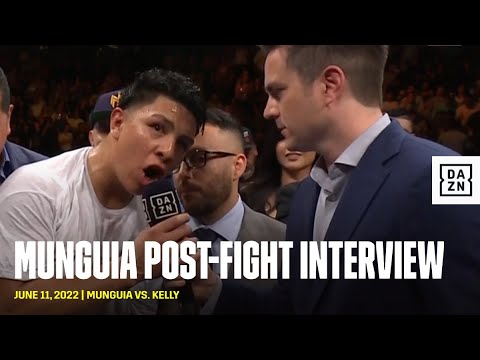 Golden Boy Promotions CEO Oscar De Hoya is frustrated at his ability to get the big fights for Munguia against WBC middleweight champion Jermall Charlo, Gennadiy Golovkin, and Canelo Alvarez.

Charlo flat-out let De La Hoya know on Friday that he has NO interest in fighting Munguia when he replied to his call-out with this message: “De La Hoya, kiss my a**!”

It’s evident that Jermall is waiting on a big payday/cash-out fight against undisputed super middleweight champion Canelo Alvarez next year in September 2023, and he’s not going to put his perfect record on the line against a dangerous puncher like Munguia.

The good news is that Munguia is on the doorstep of a title shot with his #2 ranking with the WBC and #1 WBO.

It appears that De La Hoya prefers to have Munguia fight for the World Boxing Council strap because that’s a bigger fight for him than going after the WBO belt, which Demetrius Andrade holds.

“It’s going to be an entertaining fight. I’ve been studying Kelly for a while now,” said Golden Boy Promotions CEO Oscar De La Hoya. “He’s the real deal. He’s coming back from an amazing win, and I strongly feel that when you’re from the hotbed of boxing overseas in the UK.

“You have a chip on your shoulder. Whenever Jamie Munguia fights, it is going to be an action-packed fight. It’s a great fight on paper, and once the bell rings, it will be a war.”

Kelly, 29, is coming off a career-best 10-round majority decision win over previously unbeaten Kanat Islam on February 25th. Nobody expected Kelly to come in and upset the apple cart with his victory over Kanat, but he showed that he could out-tough a guy with a superior amateur pedigree. Jaime Munguia will be fighting Jimmy Kelly in a showcase in the headliner tonight live on DAZN from the Honda Center, Anaheim, California. The fight will be a 165-lb catchweight fight, and it should be interesting to see how both guys perform at a slightly higher weight.

Munguia (39-0, 31 KOs) has the ideal opponent for him to show off his talent because Kelly lacks the power to put him at risk the way some of the better contenders would, but he’s still tough enough to potentially win if the unbeaten young star is off his game.


« Devin Haney on Tank Davis’ WBA ‘regular’ title: “Throw it in the trash can”