By Dan Ambrose: Super middleweight contender Edgar Berlanga (20-0, 16 KOs) was forced to go the distance for the fourth consecutive time in winning an unimpressive 10-round unanimous decision over Alexis Angulo (27-3, 23 KOs) on Saturday night at Madison Square Garden in New York.

After starting his career with 16 consecutive first-round knockouts, Berlanga really had a tough time, getting tagged a lot by Angulo. Berlanga bit Angulo in the seventh round and appeared to head-butt him in the tenth.

Vargas’ first-round knockout loss to Jose Zepeda last October may have done something to his punch resistance, as he shouldn’t have lost to Linger. 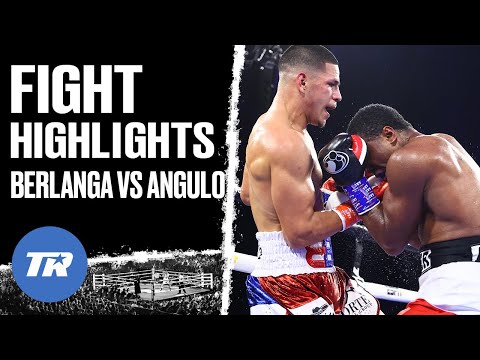 Alexis Angulo has been in with David Benavidez and stopped in ten rounds two years ago in 2020. If Berlanga can get Angulo out of there faster than Benavidez, that would give fans a chance to compare the two.

#6 WBO Berlanga will need to fight a lot better tonight compared to how he performed in his last two outings to defeat the 38-year-old Colombian Angulo.

Top Rank has got to be wondering if Berlanga is worth keeping on because he doesn’t appear to be improving as a fighter after the quick start of his career.

Although Berlanga was given a victory, some boxing fans felt that Rolls had done enough to deserve a draw or a victory because he was beating the 25-year-old to the punch all night.

In Berlanga’s fight before that against former 168-lb world title challenger Marcelo Esteban Coceres last October, he had to get up off the canvas in the ninth to win the contest by a close 10-round unanimous decision.

The former world title challenger Angulo came in overweight at Friday’s weight at 169½, so he won’t have the opportunity to win Berlanga’s WBO NABO 168-lb title should he come out victorious. However, beating Berlanga would shoot Angulo up the rankings and open the door to opportunities for other fights.

“I want to see the old Edgar with dynamite in his fists. That’s what people come to see, and let’s see if we’re going to see it,” said Bob Arum to Fighthype about Edgar Berlanga in his fight against Alexis Angulo.

“Well, if that’s the only knockouts he’s going to get, sure,” Arum continued when asked if the 16 consecutive knockouts that Berlanga scored to start his career had hurt his development.

“Hopefully, that’s just the start of a group of knockouts. The last couple of fights weren’t knockouts, but that happens. It’s like Aaron Judge doesn’t hit a home run every time he comes to bat.

“Again, I have no idea. That depends on Edgar; that depends on his trainer,” Arum said when asked if Berlanga would be ready to take on unbeaten former two-time WBC super middleweight champion David Benavidez within two to three years.

“Fighters develop quickly, slowly, or not at all. So that’s what we’ll have to see,” said Arum.

Undefeated super middleweight contender Edgar Berlanga (19-0, 16 KOs) headlines tonight in a 10-round fight against Alexis Angulo (27-2, 23 KOs) in a 10-round bout at ESPN & ESPN+ at Madison Square Garden in New York.