Joshua vs. Usyk 2 to be staged at Jeddah Super Dome in Saudi Arabia

The working date is July 23rd, and JSD management reportedly still expects the fight to go down on that date rather than the reports of it being moved to mid-August.

Sky Sports is reporting the Joshua-Usyk 2 rematch will be taking place at the Jeddah Super Dome, which should be an excellent venue for their rematch.

Joshua (24-2, 22 KOs) wants to win back the IBF, WBA & WBO heavyweight titles he lost to Usyk (19-0, 13 KOs) last September in an upset at the Tottenham Hotspurs Stadium in North London, England.

“Anthony Joshua’s rematch with Oleksandr Usyk is set to be staged at Jeddah Super Dome, a record-breaking state-of-the-art arena in Saudi Arabia,” per Sky Sports.

“Sky Sports was told that JSD management still expects Usyk vs. Joshua to be held on July 23, despite recent reports of a delay.”

Eddie Hearn is still working on ironing out a date for the rematch, but it won’t be too much disappointment if it’s delayed a week or two. Boxing fans have been waiting to see Joshua face Usyk again since last September, so it won’t hurt to wait a couple of extra weeks.

Joshua says he’s not planning on changing his style with the new trainer Robert Garcia. It’s just a matter of working on a few things to get him ready to win back his three titles from Usyk and then move on to an undisputed fight against Tyson Fury.

“Until I get into the press conference to say the official date, I think it’s subject to change again,” said Joshua to iFL TV about his rematch with Usyk. “He’s [Eddie Hearn] hard at work trying to set a date basically.

“I’m sure it’s around the corner, and that’s why I’m staying in the gym. Once it’s announced, I’ll be ready to crack on. The main thing is, ‘A happy fighter is a dangerous fighter.’ I’m happy and in a good place.

“[Robert] Garcia is here now, and we’re working on a few things. It’s not about changing styles, as such, in my opinion. Garcia’s style might be crouched down to bob & weave, but I’m a 6’6” heavyweight.

“So, it’s not about changing styles. It’s about the experience and what you know at the championship level,” said Joshua.

“I expect an announcement next week that this fight [Joshua vs. Usyk II] is happening mid-August,” said Gareth A Davies to iFL TV.

Joshua will need to show something different in the rematch with Usyk because he’s clearly not going to outbox him, and he shouldn’t have even tried last time.

Promoter Hearn seemed skeptical about Joshua planning on boxing Usyk before their bout last September, as it turns out, he was right. AJ should have stuck with his normal fighting style and used it to the best of his ability against the smaller fighter. 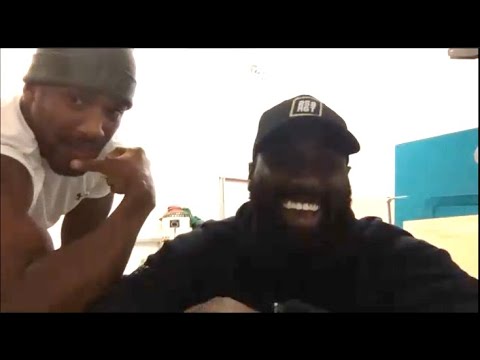