With Billy Joe’s long layoff and Ryder’s recent impressive 12-round split decision win over Danny Jacobs on February 12th, it wouldn’t be surprising if the tables are turned in their long-awaited rematch.

Promoter Edde Hearn revealed on Friday that he’s spoken to the representatives for the former two-division world champion Saunders (30-1, 14 KOs), and he needs to give them some numbers.

Saunders, 32, hasn’t fought since losing to superstar Canelo Alvarez by an eighth-round injury-related stoppage on May 8th last year in their 168-lb unification in front of 73,126 fans at AT&T Stadium in Arlington, Texas.

Billy Joe reportedly received a massive purse of $8 million for the Canelo fight, and he’d already been well off before that fight. With the money that Saunders made against Canelo, it’s unknown how much ambition he has to continue his career.

For Saunders to defeat a hungry go-getter like ‘The Gorilla’ Ryder, he will need to be motivated and willing to fight hard for a full 12 rounds.

If Ryder’s WBA mandatory spot is on the line for a fight with Saunders, that would be an excellent carrot for Billy Joe because he could potentially earn a rematch with undisputed super middleweight champion Canelo if he were to win.

It’s unlikely Canelo will ever fight Saunders again, though, because there’s no public demand for the contest, but earning the mandatory spot could give Billy Joe a slight chance.

Saunders was holding his own going into the eighth round against Canelo but was injured when the famous Mexican star hit him with a left uppercut.

The previously unbeaten Saunders suffered multiple fractures of his right eye socket from the powerful punch from Canelo, which hastened a quick end to the competitive contest.

After the round ended, Billy Joe let his trainer Mark Tibbs know that he had no vision out of his right eye, which caused him to stop the contest. Saunders was trailing Alvarez by the scores 78-74, 78-74, and 77-75.

“Billy Joe Saunders, I spoke to his representatives, and it’s on us now to come back with him with some numbers, which I’m due to do,” said Eddie Hearn to iFL TV. “He’s, I think, entering camp or in camp, ready to look to fight again.

“John Ryder went out, beat Danny Jacobs. We got to land him a big fight right now. I think the Saunders fight is a great fight, and it’s definitely a fight that Billy would accept as well,” said Hearn.

In addition to Ryder, Chris Eubank Jr. would be an excellent option for Saunders to fight. Billy Joe defeated Eubank Jr. in 2014 by a 12-round split decision. 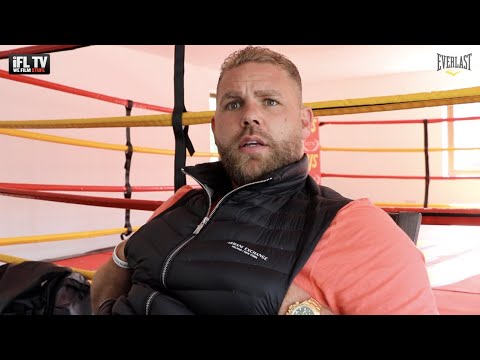