Anthony Joshua says Oleksandr Usyk “will be the same guy”

By Craig Daly: Anthony Joshua says he believes he and unified heavyweight champion Oleksandr Usyk will be the same fighters as they were the last time they fought in September.

Despite all the talk, AJ doesn’t believe that his new trainer Robert Garcia won’t dramatically alter the method he’s fought in the past.

If anything, this will be more about bringing back the positive things that the 2012 Olympic gold medalist had in his game before he suffered a big setback against Andy Ruiz Jr,

Joshua, 32, admits that he feels a lot of pressure in this fight because there’s a lot riding on it. Losing once to the talented former undisputed cruiserweight champion Usyk is forgivable, but getting beaten a second time could signal that it’s time for Joshua to move forward into another career path.

AJ’s promoter Eddie Hearn has full confidence in him, predicting that he’s going to knockout Usyk within nine rounds on August 20th, but obviously, that’s something that is more hope than anything.

Joshua to try something different

“I got to do something different this time than I did last time, but I’ve been in this position before,” said Anthony Joshua to Fight Hub TV about his rematch with Oleksandr Usyk on August 20th.

“Do more, not less,” Joshua said when asked what he learned from his loss to Andy Ruiz Jr. “I feel that he [Usyk] deserves all the support he can get, so that’s fine with me.

“I told him that I wish his family and countrymen well because I don’t wish that type of thing on any civilian to get caught up in war & conflict.

“It’s about what happens on August 20th when that bell strikes twelve o’clock and the fights done. That’s how your energy and how you looked all comes into reality. Then you figure out if it’s all just a make up or real intent behind this in the way I’m acting,” said Joshua to talkSPORT Boxing about his clash against Usyk.

“I think all fighters should experience training with new trainers,” said Joshua when asked about his thoughts on switching out his long-time coach Rob McCracken in favor of Robert Garcia, who might not fix his problems.

“I think it’s important for growth. I don’t think you should ever hold yourself subject to one trainer your whole career. It’s not a thing where I’m disrespecting anyone. It’s a thing about growth.

“You have to try and experience new things to see what you like with new people if you have the opportunity, and that’s just what it was. It was time for me to grow as a fighter.

“When you’re winning, you don’t see that you need to make changes, but I’d advise any athlete to make sure they have a performance director on board, who can direct their performance, even when things are going good,” Joshua said.

Usyk will be the same guy

“He’ll be the same guy, and I’ll be the same guy as well,” said Joshua when asked about his thoughts on fighting Usyk a second time. I’m not going to grow another arm and another leg in that timeframe, it’s possible.

“We’ll be the same guy, but hopefully the results are different and I put on a better performance. I’ve always tried to give myself to the public since I started professional boxing. So I’ve always given interviews and tried to be open, but it does put you under the microscope.

“I’ve always said that I’m not perfect. I’m entitled to make mistakes, and I’m growing as a person. I’ve grown up in front of my boxing audience from a young 18-year-old until a 32-year-old. I’ve grown up and made a lot of mistakes.

“I’m still here, standing strong, and as you said, it makes me a richer and wiser person. I know I am,” said Joshua when asked if he’s a ‘finisher.’ What it was for me, it’s not enough.

“Every person at the top level is going to be there to be finished. I moved up the ranks quick, so I realized these guys are more determined, more fitter, more tougher,” Joshua said.

“I need to start learning about my boxing IQ, so I put that stuff aside,” said Joshua. “Yeah, it’s not my strength, but I don’t mind practicing in the ring. I’m going to go in and fight, and try out this boxing tactic,” said Joshua.

Changing Joshua’s style at this late stage in his career could be a mistake on his part because he’s facing the wrong type of opponent for him to be tinkering with his game.

What Joshua needs is to make small incremental changes, starting with his conditioning because that’s been a constant problem for him during his career.

“It may not be to my strength, but I’m also gaining so much knowledge and wisdom,” said Joshua. “When I boxed Andy Ruiz the second time, for example. It was a completely different style. So I’ve learned in boxing that you have to be versatile, and you have to be able to adapt.

“Yeah, definitely,” said Joshua when asked if fans will see him fight more in the UK after his fight against Usyk in Jeddah, Saudi Arabia. “After this fight, I’ll be back in the UK definitely.

“100 percent, that’s one that we have to have, but however he feels is how he feels,” said Joshua when asked if he wants to fight Tyson Fury after his rematch with Usyk.

“He’s a fighting man, so if someone calls him out, he’ll be straight back out,” said Joshua about fighting Fury. “I hope you’re good, wife’s good, kid’s good, dad’s good,” said Joshua when asked if he has a message to Fury. “Respect to all you’ve achieved, well done.” 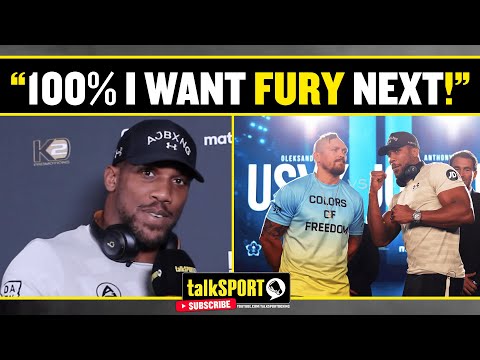