Keith Thurman could be next for Jaron Ennis

By Craig Daly: Trainer Bozy Ennis says he’s talked with Showtime Stephen Espinoza, and he’s confirmed to him that Keith ‘One Time’ Thurman will fight Jaron ‘Boots’ Ennis next for one of the vacant welterweight titles.

If Thurman can fight Ennis while he’s still green, he’ll have his scalp and regain his throne as the #1 welterweight once Spence and Crawford leave the division.

Boots Ennis’ first choice would be to challenge Spence for his three belts, but that’s not expected. Spence told the media last Saturday night that he wants Crawford next for the undisputed championship at 147.

“I talked to Stephen [Espinoza], and he said if we don’t get the title shot with Spence, we’ll probably fight Thurman if he [Errol Spence] gives up the titles for the titles,” said Bozy Ennis.

“I think he’d do it because he’ll get back in the picture,” said Boots Ennis about believing that Thurman will agree to fight him.”

“Not only that, it’s for the titles. I think he would take a chance for the titles,” said Bozy about ‘One Time’ Thurman. “Other than that, he wouldn’t.

“If we don’t fight him [Thurman], we’ll fight [Eimantas] Stanionis. So one of them has got to fight him [Boots Ennis]. It should be pretty soon,” said Bozy.

Ennis had been hoping that by beating Custio Clayton in their IBF welterweight title eliminator last Saturday, he would be able to force IBF champion Spence to defend against him. That’s not going to happen.

The 33-year-old ‘One Time’ Thurman had hoped to get a crack at IBF/WBA/WBC champion Spence, but he’s still bitter over being ignored by the Florida native during the early period of his career.

Thurman (30-1, 22 KOs) has missed a lot of time due to injuries, but he looked great in his last fight. Last February, ‘One Time’ Thurman returned from a three-year layoff to defeat Mario Barrios by a sparkingly 12-round unanimous decision.

Thurman looked about 80% of the fighter he’d been in the zenith of his career from 2014 to 2017, which is quite good. Surprisingly, Thurman was able to look as good as he did after being out of the ring for basically four out of the last five years of his career.

Thurman had a long two-year layoff after his win over Danny Garcia in 2019. He then came back for two fights against Josesito Lopez and Manny Pacquiao before disappearing for another 2+ years before emerging last February for his ‘get-back’ fight against Barrios.

Matchroom Boxing promoter Eddie Hearn hopes to get Thurman to agree to fight his young contender Conor Benn next in August or September. 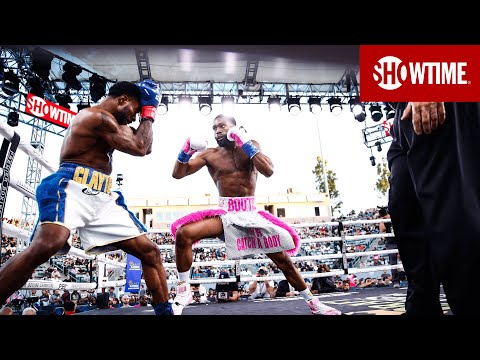