By Brian Webber: Eddie Hearn is anxious to see how Joshua Buatsi does tonight in his WBA light heavyweight eliminator bout against #7 ranked contender Craig Richards at the O2 Arena in London.

It’s been five years since Hearn signed Buatsi (15-0, 13 KOs) fresh out of the 2016 Olympics, and tonight he needs to prove that he made the correct decision.

If Buatsi can beat the 32-year-old Richards (17-2-1, 10 KOs), he’ll at least be guaranteed a title shot against WBA 175-lb champion Dmitry Bivol. Even if Bivol beats Buatsi, which is highly likely, the money that he’ll get for a title shot will be good.

If this fight had taken place in 2020, it would be seen as a slam dunk victory for Buatsi, as Richards had done nothing with his career until last year. Richards’ performance against Bivol last changed all of that.

After a sluggish start in the first five rounds, Richards took the fight to Bivol, backing him up and punishing him with heavy blows from round six through twelve.

The fight was close enough to be scored a draw, but Bivol was given the benefit of the doubt with the judges giving him a narrow 12 round unanimous decision by the slimmest of margins.

“It’s a 50-50 fight, I think think it is, and everyone in boxing feels that way,” said Eddie Hearn to TalkSPORT about tonight’s Joshua Buatsi vs. Craig Richards clash.

“To the casual world, the hype 0f Joshua Buatsi since the Olympic games [in 2016] just makes you think this [Richards] is a stepping stone to the world title.

“I couldn’t say they dislike each other, but they certainly want to do a job on each other at the O2 at the weekend.

“There’s a lot of bragging rights and local pride as well, and, of course, a shot at the world light heavyweight title,” said Hearn about the Buatsi vs. Richards winner being the mandatory to WBA 175-lb champion Dmitry Bivol.

“For sure, it’s an official eliminator for Dmitry Bivol’s [WBA] world title. We did expect Canelo Alvarez to win that fight, and he didn’t.

“Now, Bivol, if he doesn’t rematch Canelo Alvarez will be looking for an opponent in September or October.

“I think Craig Richards had a really good fight against Dmitry Bivol, and I think the biggest winner out of the Bivol-Canelo fight was Craig Richards because everyone looked at his performance and a performance where he didn’t really believe in himself and thought, ‘Wow, this guy really is world level,‘” said Hearn. 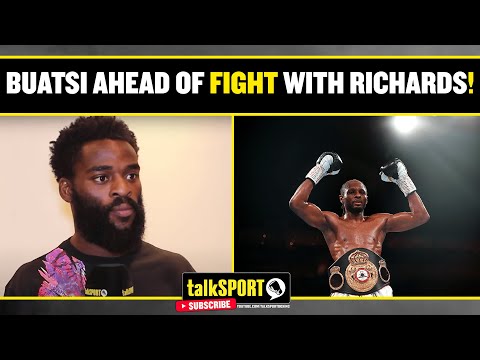