By Huck Allan: Eddie Hearn predicts Dmitry Bivol (19-0, 11 KOs) will outweigh Canelo Alvarez (57-1-2, 39 KOs) by 20 lbs by the time the two fighters step inside the ring on Saturday night at the T-Mobile Arena in Las Vegas.

Hearn believes Canelo will only rehydrate a couple of pounds to 177 or 178, whereas Bivol will be in the 190s by fight time.

If that turns out to be the case, Canelo will have a real fight on his hands, mainly if this is the same version of Bivol that we saw defeat Sullivan Barrera, Jean Pascal, and Joe Smith Jr.

Canelo, 31, asked for this fight against Bivol, and now he’s got it. The Mexican star could live to regret it on Saturday night when he squares off against the Russian fighter Bivol in the main event of their fight on DAZN PPV.

Canelo had a successful trial run at 175 in 2019, beating the tired old warhorse Sergey Kovalev by an 11th-round knockout, but that was a fighter at the end of his rope.

Kovalev was nowhere near the level Bivol is fighting at now, and Canelo may have made a mistake in taking this fight.

“At the commission weigh-in, he looked tiny in comparison to Dmitry Bivol, but this is what he wants. He wants to handicap himself to be tested,” said Eddie Hearn to Fight Hub TV about Canelo Alvarez being a significantly smaller fighter than WBA light heavyweight champion Dmitry Bivol.

“You can’t put Canelo in a normal fight at a normal weight because he’s too good, so he has to step up and take these challenges,” Hearn continued. “Bivol will be 20 lbs heavier.

“Bivol is so ice cold. He’s in such great condition. This is honestly going to be an incredible fight tomorrow night. It’s 100 degrees, and there are thousands of people out here.

“He’s [Canelo] a man of the people, he’s a hero of the people, and Cinco de Mayo weekend is really important to him. He’ll be ready to put on a show tomorrow.

“I was really impressed with him,” said Hearn about Bivol. “Up there on stage, it’s not easy. His English isn’t that good, but he stayed calm and spoke in English.

“He’s ready, and he’s been waiting for this opportunity for a long time. I think he feels he’s the much bigger man,” Hearn said of Bivol. “No, because I think people in boxing know how good Dmitry Bivol is,” said Hearn when asked if he’s surprised how many people are now thinking Bivol can win.

“To the casual fan, they’re saying that Canelo can’t be beat, but anyone that knows boxing knows this is a very, very tough fight. 50-50? It’s hard to say that about Canelo Alvarez, but probably one of the most competitive fights of his career so far,” said Hearn. 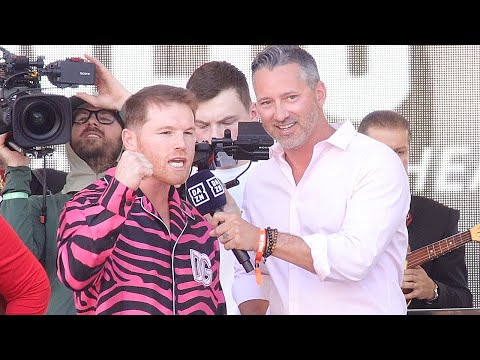