Canelo to fight Golovkin next on Sept.17th, then Bivol rematch later 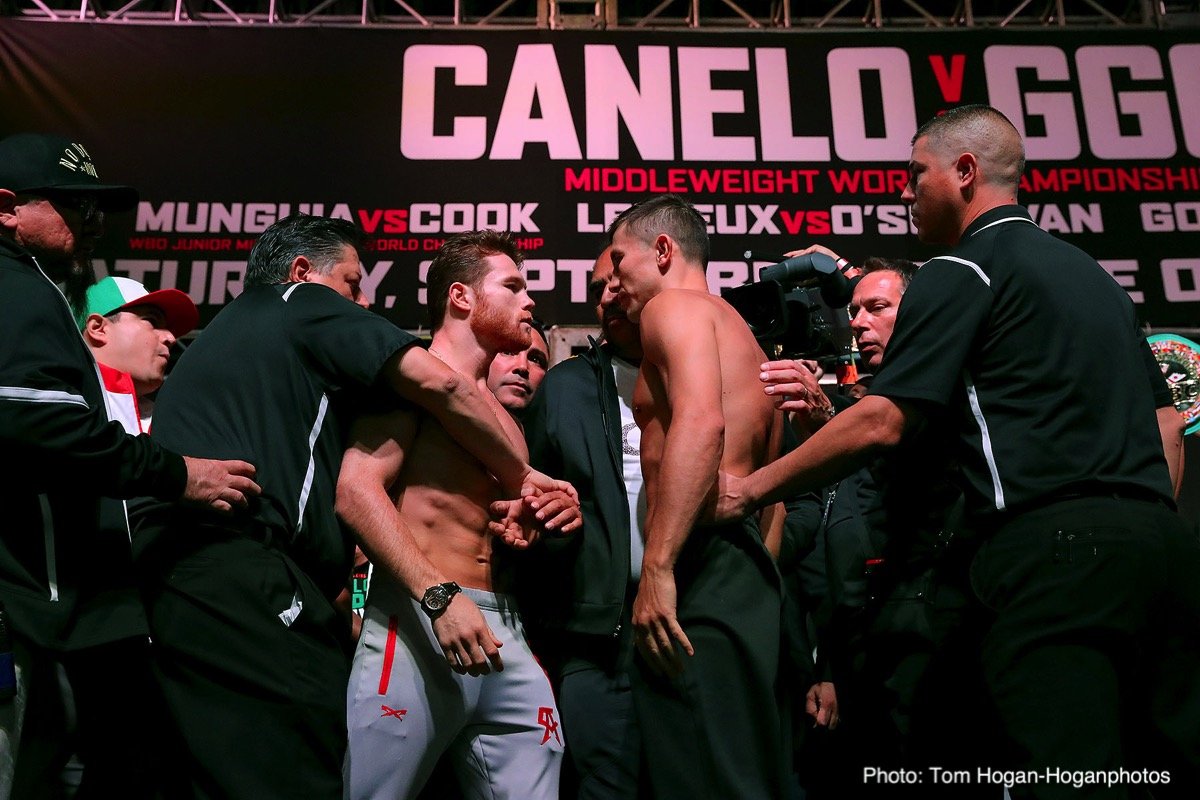 By Allan Fox: Canelo Alvarez will reportedly be taking the trilogy match with Gennadiy Golovkin next on September 17th, and then face Dmitry Bivol in a rematch.

Golovkin will be turning 41 soon, and he’s really showing his age, as we saw in his last performance against Ryota Murata on April 9th. If Canelo doesn’t fight Golovkin now, someone else will beat the aging Kazakh and wreck the prospects of a third fight between them.

“We already had that contract [with Gennadiy Golovkin], that agreement, so we have to continue what we started, and I think those are the two biggest fights in boxing, the fight with Golovkin and the rematch with Bivol,” Canelo said earlier today.

Canelo will be returning to the 168-lb division to defend his undisputed super-middleweight crown against Golovkin, who will be moving up in weight eight pounds from 160 to challenge him for all four belts.

“Canelo is in the position to do whatever he wants. He’s going to make a lot of money no matter who he fights, regardless of the Bivol rematch,” said Chris Mannix.

“If your Canelo Alvarez, what do you do? It seems like there are two options for September. A rematch with Bivol either at 175 or, as you said, Bivol coming down in weight perhaps and fighting at 168 maybe at a catchweight at the middle.

“Do you put that fight [Bivol] aside and go into the marketable trilogy fight against Gennadiy Golovkin? It’s still one of the bigger fights that appeal to the mainstream audience in all of boxing.

“There’s still an appetite for Canelo against Golovkin. If you’re Canelo Alvarez or if Canelo asks you what he should do, what would you say?” said Mannix.

“I say take the GGG fight,” said Mares on what Canelo should do next for September. “Take that fight. People still want to see that fight, and it’s a good fight for him.

“We got to understand that Canelo has been going tough after tough after tough fight back to back,” Mares continued. “He fought three fights or four fights in a year? In a small period of time, this is a guy that fights constantly.

“He doesn’t let his body rest. I’m not saying that had anything to do with his performance against Bivol, but what I’m saying is take a break. Take a fight in your weight class [168] against a great name against a guy [Golovkin] that you fought already.

“An older guy that did not look as impressive as he usually does, speaking of GGG, and go out there and perform. Beat this guy, and after that, guess what? People are back on your bandwagon. I hate people for doing that, but boxing is like that. They only recognize you for your last performance.

“I say do that. Don’t face Bivol yet nor in the higher weight class that you fought in [175] because it’s not the time. I’m going to be a little honest here.

“Canelo, not only did he lose because he moved up to a heavier weight class, but he also got outboxed. You’ve got to understand that. Bivol’s boxing methods, not staying on the ropes and jabbing at a distance, helped a lot.

“I think to take that break, and put that fight [Bivol] on pause, take the GGG fight, get your momentum back, get your mind right, and then fight against Bivol,” said Mares on what Canelo should do next.

“When you watch that fight [Canelo vs. Bivol], you mention the weight,” said Mannix.

“Did you watch that fight thinking, ‘Maybe Canelo reached his limit? Maybe a guy that began his career at 140 pounds should not go higher than 168?’ Or do you think that if they do fight again, Canelo can make the necessary adjustments to come away with a win?”

“I think he can make the necessary adjustments, and if Bivol moves down to Canelo’s weight [168], there’s a way bigger chance of Canelo winning also,” said Mares.

“What are the adjustments then? Because Bivol is probably going to be the same fighter the second time around, and maybe even a little bit better having experienced Canelo the first time,” said Mannix.

“The adjustments, for this fight, he looked tired,” Mares said of Canelo. “You could tell he didn’t prepare as well, and he said it, ‘I was tired after the sixth,’ I believe he said. ‘I was gassed.’ The conditioning wasn’t there.

“So when your body’s conditioning isn’t there, it prevents you from doing more. What do I mean by more? Throwing more punches. He was only throwing one-two, and Bivol was timing him. Catching him with one hand and counter-punching with his left.”

We need to see old Canelo

“So, throwing more volume, more pressure, the old Canelo, the Canelo we usually see. Moving forward, putting pressure, closing the gap, body shots, more combinations, not just relying on your power, which seemed like Canelo was trying to do. Trying to land a big shot that never got there, especially in that weight class.

“If I was advising Canelo, I would say, ‘Look, the Golovkin fight is a huge fight,'” said Mannix. “‘You’re going to be a big favorite in it; you’ll make fifty million dollars or something like that. It’s a very mainstream type of fight.

NEWS:   Golovkin not sure why Canelo is angry with him

“‘Take an easier fight in December if you want to go three times. Maybe that means John Ryder in the UK or some kind of homecoming, and then you see if Bivol can get a fight against the Beterbiev vs. Smith winner.’

“Let’s say Bivol beats the winner of the Beterbiev-Smith winner, the Bivol that I saw would be the favorite against either. Joe Smith is a fighter that he already wiped the mat with a couple of years ago, and Beterbiev, as big and as strong as he is, he can be outboxed.

“We’ve seen that happen a little bit at times, whether it’s Gvozdyk or Marcus Browne. We’ve seen them have some success against him. If Bivol wins that fight and becomes undisputed at 175, that’s another carrot to face him with.

“If you face him in May 2023, not only do you get the rematch, but you only have to campaign at 175 one more time to get all four belts. It’s a lot of business sense to wait on a rematch with Dmitry Bivol,” said Mannix.

“If Canelo doesn’t listen to you, I hope he listens to you now,” said Mares. “You put it in perspective of how he should really do it in how business is done because you touched a great point. It’s a business that it builds up to be the right fight at the right time with all that in line,” said Mares.

Fight for undisputed in 2023

“By the way, I get Bivol and his team saying, ‘I’ll go to 168’ because let’s say that Bivol in September goes down to 168 to fight Canelo,” said Mannix. “Let’s say Canelo beats him. He could then go up next year and fight for the undisputed at 175.

“That would be two undisputed championships within a matter of months. That’s Hall of Fame s***, Abner,” Mannix said about Canelo.

“Yeah, that’s why he’s trying to press for Canelo to try and get into his head and his team, ‘Let’s do it. Let’s make this fight again. People want it; I beat you,'” said Mares.

“‘I know you don’t want to come up to my weight. I might come down to your weight [168] for all your belts.’ They’re [Team Bivol] are trying to get that fight right now.”

“You’re right. Canelo’s team should be smarter, and they are. He’s gotten to this position for a reason, and I think they’re going to make the right decision as far as who he fights next,” said Mares.

“I wonder, and you’re familiar with Mexican pride, I wonder if the Mexican pride takes over with Canelo and says, ‘You know what? I know the Golovkin fight is the easier fight, but I’m not going out like that.’ Like Canelo told me in the ring, ‘This isn’t over.’

“I wonder if that kicks in with him? ‘I’m doing it come hell or high water'”

“It does kick in at the moment, but I think he’ll have time to sit down and make the right decision. He will make the smart decision,” said Mares about Canelo.