By Chris Williams: Yordenis Ugas says his next fight will be against WBO welterweight champion Terence Crawford if he successfully defeats IBF/WBC champ Errol Spence Jr. this Saturday night in their headliner on Showtime PPV.

Of course, it’s easy for WBA champion Ugas (27-4, 12 KOs) to say that he’s going to fight Crawford next because he’s a massive underdog in this fight on Saturday against Spence (27-0, 21 KOs).

In terms of negotiating a fight with Crawford, Ugas has a better chance than Spence. With all the titles Spence will have and the fact that he’s a proven PPV star, it will be next to impossible to negotiate a deal with Crawford.

The problem is Crawford believes that his #1 pound-for-pound status means he deserves a 50-50 purse split with Spence, and that’s f not going to happen. At best, Crawford might get a 60-40 deal with Spence, and if that’s not good enough, the fight won’t happen.

It’ll be far easier to hammer out a deal for a fight with Crawford if Ugas wins on Saturday, but that is so unlikely that it’s not a discussion point.

Ugas is too basic, too old, and too limited on offense to hang with Spence. Chris Williams sees this fight as a pure mismatch on Saturday night, with Spence beating Ugas like a drum, making him look like an old man inside the ring.

This will be a far easier fight for Spence than his last two fights against Danny Garcia and Shawn Porter.

“That’s my path. If I win, I go to a fight with Crawford,” said Yordenis Ugas to Fight Hub TV on his plans if he defeats Errol Spence Jr. on Saturday.

“It’s another great fight. I want to fight the best. If I win, I want to take that path,” continued Ugas about his plans to face WBO champion Crawford next.

“It hasn’t happened yet due to many things,” said Ugas when asked why Spence hasn’t faced Crawford.

If the boxing public believed Ugas had a chance of winning, there would be more interest in it.

The fact that fans are barely paying attention to the Spence-Ugas fight is a clear sign that they don’t view Ugas as having a real shot at defeating Spence.

Ugas looked nothing special against Pacquiao last August. In watching that fight, my thoughts were that Pacquiao would have embarrassed Ugas if he were two years younger and still active. It was more of a case of Pacquiao being shot than Ugas doing anything special in the fight.

As I said, the chances of Ugas winning the fight are slim & none. The only shot the 35-year-old Ugas has of winning is if Spence suffers another eye injury, and even then, he’ll still likely be too much for the aging Cuban.

Ugas looked very beatable in his last fight against 42-year-old Manny Pacquiao, and the only reason he won the battle was the Filipino star was coming off a 25-month layoff. If Pacquiao had been active, he would have indeed beaten Ugas.

“I think it’ll be very competitive against a good fighter,” said Ugas about his fight against Spence. “Our styles will complement each other to make a good fight. I expect a hard one where I have to pull out the stops to get the win.

“I got to come out and perform and look for plan-A, B,& C. Everything will come down to my will and my heart. That will be the difference.

“I’ve spent months thinking about this fight. We have a plan now for a hard fight. I just got to make weight on Friday,” said Ugas. 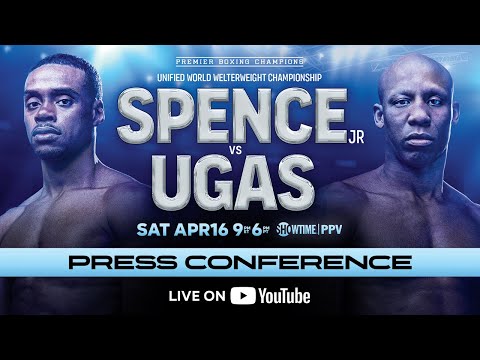