Errol “The Truth” Spence Jr. said he was focused on scoring a knockout against Yordenis Ugas during a public media workout on Wednesday as Spence vs. Ugas fight week events officially kicked off with an outdoor session for fighters competing this Saturday, April 16 live on SHOWTIME PPV from AT&T Stadium in Arlington, Texas.

The event is headlined by WBC and IBF World Champion Spence Jr. taking on WBA World Champion Ugas squaring off in a welterweight title unification clash.

“Besides the Kell Brook fight, this is definitely the meanest I’ve been going into a fight,” Spence said on Wednesday. “I’m just ready to go.”

Ugas, who worked out before Spence, said that his reach, height and his “will and my heart” are going to be the keys to pulling off an upset.

Tickets for the live event, which is promoted by TGB Promotions and Man Down Promotions, are on sale now and can be purchased at SeatGeek.com, the Official Ticketing Provider of AT&T Stadium.

Here is what the fighters had to say Wednesday from Texas Live! in Arlington:

“It means everything to get a response like this in Dallas. It’s getting me pumped up. I’m ready to go. I’m ready to fight. I’m ready to put on a great performance in front of my hometown crowd.

“Of course, I’m going to win. But I’m going for the knockout.

“There’s nothing to elaborate on when I said I’m going for the knockout. It’s what I said. So if I get it, I get it. If I don’t, I don’t. I know one hundred percent I’m getting the victory, but I definitely want to knock him out.

“It’s a blessing and a dream come true to get the support of your hometown. People are coming out here to support me with their hard-earned money during a difficult time. It’s a school night and people came out to support me and I really appreciate it.

“I’m one hundred percent ready. I’ve been training hard. I know the task at hand. Training camp has been going great. I know what I’m capable of. You can expect and you’re going to see fireworks. It’s going to be a great show and a great performance.

“I’m going to fight Ugas like I’ve been fighting everybody else. He’s a very good fighter. He trains hard. He comes from a Cuban background and he’s very dedicated. But I feel like I’m one hundred percent dedicated and in prior fights, I haven’t been as focused as I am right now.”

“I’m excited and ready to fight in front of a great fan base on Saturday night here in Dallas. Spence is a respectful fighter and we have nothing against each other outside of the ring, I’m just ready for action.

“I’m a competitor, I’m a warrior and I came to fight 12 rounds strong. That’s the most important thing of all. That alone should make Spence uneasy.

“I know I’m the underdog. I came here to win. I will fight whenever, wherever, in anybody’s backyard.

“Spence can say whatever he wants. I’ll fight the way I always do, exchanging blows and coming forward.

“I’ve always been an underdog – six years ago and now, I’m used to it. Spence is the rightful favorite as a unified champion in his home city, but I came here to pull off the upset.

“I want all of Cuba to know that I fight for them with all my heart and soul, and I will do just that on Saturday night.”

“I’m super excited for this fight and I’m very thankful for all the support I’ve received here in Texas. I can’t wait to put on a show for everyone Saturday night. 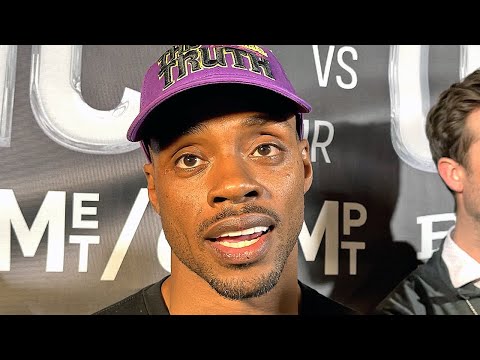 “The biggest lesson I learned from the Gervonta Davis fight is that I need to prepare physically and mentally to not give one inch to any opponent ever again.

“I come to give everyone a good, clean fight. Whether this victory comes by knockout or by decision, it’s going to be fine by me.

“I feel right at home in front of these fans. That’s why I’m even more motivated to give everyone a great show. You’re not going to want to miss it.”

“I’m really thankful to be in this position, especially in front of these people here today. I’m very excited to give everyone a great fight. I can’t wait to show the world what I’m capable of.

“No matter what has happened in the past, you have to have courage and the conviction that you can win. That’s what I’m going to have on Saturday night.

“Every fight is different. The key thing is that we’re getting ready to prove to everyone that I can come out on top Saturday night.”

“I’m extremely excited for this fight. This is a dream come true and I’m thankful every day for this opportunity to compete on this card.

“Vargas is a great fighter with a lot of really good experience. We just saw him give Isaac Cruz a hard fight last time out. So I’m training for him like he’s in his prime and I’m ready for whatever he brings.

“I think a win in this fight will put me on the radar and put me in line to face the top guys in the lightweight division. I’m going to put on a performance that puts everyone on notice.”

“This is a great opportunity for me and it’s going to be great action with me and Valenzuela. I’m really looking forward to this fight on Saturday.

“Every fight provides valuable lessons. My last fight versus Isaac Cruz was against a young scrappy fighter with some tricks up his sleeve. I’ve learned from it and you will see that in this fight.

“He’s a good fighter who’s dedicated to the sport. But I believe that I have more skills and much more experience than Valenzuela.”

“Josesito has been in there with a lot of amazing fighters. He’s an amazing fighter himself. But when Cody Crowley comes to fight, that’s a dog in the ring. Saturday night you can expect us to go at each other from the first bell to the last bell. That’s what I bring every time.

“I’m a pay-per-view star in the making and everyone is going to find out what I’m about Saturday night. If you haven’t heard of Cody Crowley yet, make sure you tune in Saturday night.”

“I’m just prepared and can’t wait until Saturday night. My hunger to win is strong. I want to keep competing against the best fighters in the world and fight for world titles. I’ll be ready to face anybody they put in front of me.

“Any time you see one of my fights, especially when it’s here in Texas, they know that I come to fight. It’s going to be one of the best fights of the night for sure.

“I have a deep love for Texas and I can’t wait to show off in the ring on Saturday.”

“My win against Jamal James was a good win and it’s given me more confidence moving forward. I’m just as hungry as Stanionis is and I know what to expect from him. I’m completely ready.

“This is the kind of fight I like to be in. I like to make it tough in there and bang with my opponent on the inside. I’m looking forward to it.

“It’s a big honor to be on this card. It’s easily one of the best cards of the year and it’s a great opportunity to show off my skills and my boxing.

“Once I stepped into the gym with my trainer Joel Diaz, he told me that I’m the best welterweight out there and that I’m going to become champion. Now we have the belt and I’m growing and getting better with every fight.

“The main event is a great fight. I’m looking forward to seeing who wins so that I can face them next.

“I don’t make predictions for my fights. I have a goal and that’s to stop my opponent. That’s what I’m working to do.”

“I’ve dreamt all my life of this moment Saturday night. I was extremely happy when this fight officially came together.

“It would be amazing to be the first world champion from Lithuania. Everyone is expecting me to win and rooting for me to get it done. I want to make the dream a reality.

“For sure the fans are going to be in for an entertaining fight. This is going to be two trucks meeting in the middle of the ring and making a big explosion.

“We both have a dream to win the belt. We’re both training hard to reach our goal. This is going to be a banger. That’s what our styles always create.

“Spence has a lot to prove, he was out for a long time. He’s going to have to look good and it’s going to be a good fight against Ugas.

“I just want to hear the words ‘and the new’ on Saturday night, that’s it, it’s simple.”

“This means the world to me to be on a huge card like this. I’m going to show the world who I am on Saturday night.

“I’m looking at this as another opportunity to showcase my skills. I’m just moving one step closer to the goal of a world title with a win on Saturday.

“I don’t let my knockout streak get to me. The main goal is to win. If the knockout comes, I’m ready. That’s the plan for Saturday night.

“I just stay focused and stay in the gym. Fighters get a little bit of fame and forget how hard they had to work to get there. I’m not going to be slacking.

“I am just blessed with power. A lot of people think you can create speed, but you can’t. You’re either born with it or you’re not. That’s the key to my power.

“I turn 23-years-old next week and I believe it’s time for me to start fighting the top-10 guys. Some guys may see more risk than reward fighting me, but eventually, they’ll have no choice.

“I don’t make predictions but I’m going to have my hand raised on April 16.”

“I said yes to this fight immediately. These are the types of fights that I want. SHOWTIME always has big fights and I want to be a part of them.

“I know the type of fighter I am. I’ve matured over the years, I’ve had a great training camp and I can’t wait to fight.

“Lee is a good fighter, but my experience in the ring is going to be the difference. I’ve fought in every kind of venue you can imagine. This is my second time fighting at AT&T Stadium. Experience goes a long way, but at the end of the day, it matters what you do under those bright lights.

“My trainer Stephen Edwards, he’s really brought me to school. He’s one of the best trainers in the world. I’ve learned more with him than I did my whole career. I’m very confident heading into Saturday.

“This is going to be a great fight and I’m winning at the end of the day. There’s a lot on the line and I’m going to be the winner Saturday. Winning this fight would change everything for me. I really can’t wait to get into the ring.”

John Fury says Haye is a “HATER,” doesn’t want him to commentate Tyson vs. Whyte on April 23rd »