By Matt Lieberman: Errol Spence Jr. looked badly drained during Friday’s weigh-in for his fight with Yordenis Ugas, and there are already fans questioning whether the weight cut may have been too much.

The question now is can Spence win? If IBF/WBC welterweight champion Spence (27-0, 21 KOs) isn’t able to put the weight back on overnight and not come into the fight without being sluggish like in his previous fight, Ugas can win.

Spence-Ugas will be fighting this Saturday night on Showtime PPV from the AT&T Stadium in Arlington, Texas.

This is a fight that Spence sought out after watching Ugas step in as the replacement to defeat Manny Pacquiao last August after Errol suffered an eye injury during sparring.

“How tired are you waiting for that fight?”

“That fight would have happened if my retina didn’t get detached and if I fought Manny Pacquiao because I would have got the other belt [WBA] and the Ring Magazine belt. It would have been me and Terence Crawford left,” said Errol Spence Jr.

The fans have been waiting for Spence and Crawford to fight for the last four years, and it seems like it’s dragged on too long. Crawford will be turning 35 this year, and he’s starting to show the signs of aging.

Although some boxing fans believe Crawford is still in his prime, it’s pretty obvious watching how the Nebraska native struggled against gatekeeper Shawn Porter and Egidijus Kavaliauskas that he’s on the downside of his career.

“That’s a fight that I’m open to after this fight, but I’ve got to get past Ugas,” said Spence. “I’m 100% focused on Ugas. If I don’t get past Ugas, it’s not going to be a Terence Crawford fight.

“But after this fight, it’s a fight that I want and all the fans want. That’s for all the belts, all the marbles, and determines who’s the super champion at 147 pounds and who is the best?” said Spence.

“I know I’m the best in the world right now,” said Errol. “It’s not that I believe. I’ve been proving it in the ring every time I step in the ring. I have long layoffs and I fight top-tier opponents every time.

“After my car accident, I came back and fought Danny Garcia. After my eye injury, I come back and fight a champion like Ugas,” said Spence. 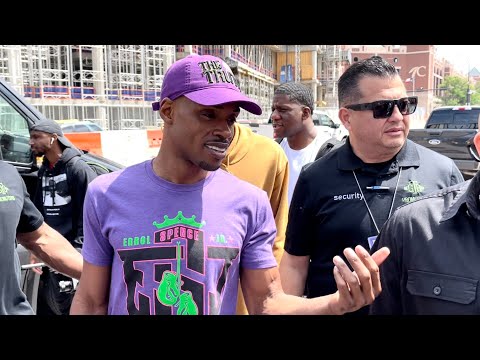