Negotiations between Joyce (13-0, 12 KOs) and former WBO heavyweight champion Parker (30-2, 21 KOs) are making “good profess” towards a fight that could take place in the summer.

The winner of a fight between Parker, 30, and Joyce will be in an excellent position as the WBO mandatory to challenge the Anthony Joshua vs. Oleksander Usyk II winner. Those two are expected to fight in late June.

Joyce, 36, is coming off a wrist injury he suffered during his sixth-round knockout win over Carlos Takam last year in July.

It was a good performance by the 2016 Olympic silver medalist Joyce with victory over the former world title challenger Takam at the Wembley Arena.

“It’s a massive fight. We’re still negotiating it – it’s not finalized yet but good progress is being made,” said Parker’s manager Adam Morallee to Sky Sports.

Parker vs. Joyce isn’t the “biggest fight on the heavyweight scene,” as Morallee says, but it’s certainly a good one, a match-up that will determine who the Joshua vs. Usyk 2 winner will eventually need to face.

Parker dropped Chisora a couple of times and had him hurt on numerous occasions in their fight.

For Parker, he showed a lot more aggression against Chisora than he had in their first fight in May of last year. Parker looked timid in beating Chisora by a 12 round split decision in that fight.

Despite the improvement in Parker’s game from his first contest against Chisora, he still lacked the killer instinct to try and finish off Dereck.

Each time Parker had Chisora hurt, he held back from trying to knock him out, appearing wary of getting caught by a sneaky punch from Delboy.

The engine that Joyce has will make it tough on Parker to win unless he can hang with the fast pace that the Juggernaut sets.

We haven’t seen Parker forced to fight hard for a full 12 rounds, so it should be interesting to see what happens under those conditions.

It’s important that Joyce get a title shot soon because his age is creeping upward, and he’s not going to be able to beat the top guys if he gets too old. 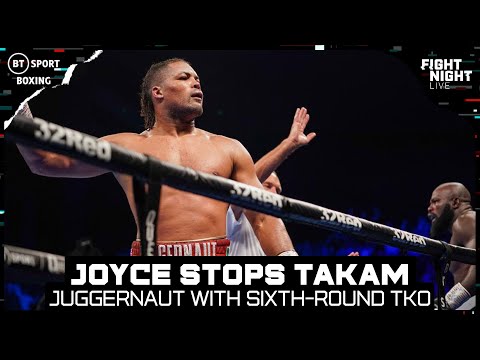