By Dan Ambrose: It what could be bad news for WBA welterweight champion Yordenis Ugas, Errol Spence Jr. says he feels he’s improved since his last fight over a year ago against Danny Garcia in December 2020.

Spence feels he’s in top form after eye surgery to repair an injury he suffered last summer while preparing for a fight against Manny Pacquiao.

The long rest for Spence has allowed him to recharge his batteries for this fight against the tough Cuban Ugas, who shocked the world last August with his win over Pacquiao.

When IBF/WBC welterweight champion Spence (27-0, 21 KOs) fought Danny ‘Swift’ Garcia sixteen months ago, it was his first fight back from his car crash, and he wasn’t 100%.

Not surprisingly, the Garcia fight proved to be tougher than expected for Spence because he wasn’t able to mow the steel-chinned former two-division champion, resulting in the contest being a grueling one.

Spence wants to show boxing fans that he’s fully back this Saturday night when he battles Ugas (27-4, 12 KOs) in a welterweight unification fight on Showtime pay-per-view at the AT&T Stadium in Arlington, Texas.

If Spence wins, his next fight could be against WBO champion Terence ‘Bud’ Crawford for the undisputed championship of the division. Of course, that will depend largely on whether the match can be negotiated.

“I feel like I’m a better fighter [since] the Danny Garcia fight because I came off a car accident,” Errol stated on Thursday during the news conference with Ugas.

“I flew 40 [feet] in the air and landed on concrete,” said Spence in recalling the terrible car crash of his expensive Ferrari in October 2019.

“So, of course, with time, I’m going to become a better fighter than the Danny Garcia fight.

“My body was still kind of banged up and I still won the fight [against Danny], so, I feel like I’m just a better fighter overall. I’ve been in the gym a lot longer and just been training harder and just been more focused than ever,” said Spence.

If Spence stops Ugas in an emphatic fashion, he’s going to show fans that he’s back, and ready for the last hurdle at 147 against Crawford. That’s an important final step for Spence before he moves up to 154 to go after all the titles in that weight division in 2023. 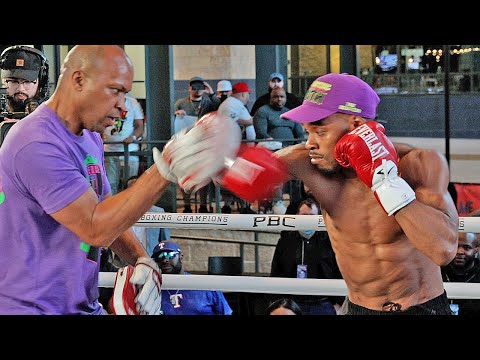