By Scott Gilfoid: Conor Benn believes he’ll be ready to challenge for a world title against Errol Spence Jr. or Terence Crawford after two more fights, but there remains much doubt whether it’s prudent for him to take that step at this juncture.

Throwing Benn in with Spence, Crawford, or Ugas at this point would be a crime. He’s not ready for elite-level guys or even the sub-elite like Jaron Ennis, Vergil Ortiz Jr., or Keith ‘One Time’ Thurman.

Conor will be fighting the 34-year-old Chris Van Heerden (28-2-1, 12 KOs) this Saturday night at the Manchester Arena in Manchester, England. This is another example of Benn being matched against an old fossil in a gimme-level fight.

Benn (20-0, 13 KOs) is feeling the sting of criticism from boxing fans, many of which view him as a counterfeit creation, carefully put together by his promoters to milk the public due to him being the son of Nigel Benn.

Like the 1980s lip-syncing musical group Milli Vanilli, Benn wants to show that he can do it for real. Is Conor Benn boxing’s equivalent of Milli Vanilli?

There are A LOT of doubts out there about where Benn can swim with the sharks without getting ripped to pieces by the big fish.

Benn’s victories over the many old timers that his promoter Eddie Hearn has matched him against have planted ideas into his head, making him believe that he’s good enough to mix it with Spence, Crawford, and Ugas.

This could be a BIG problem for Matchroom Boxing, as Benn has been fighting fodder-level opposition that would lose to virtually anyone in the top 15.

Benn wanting to fight top-rung opposition could spoil a lucrative revenue stream for Matchroom if he’s exposed as a fake, a guy whose talent is nowhere near the upper tier of the 147-lb division.

“Conor Benn, a fighter who wants to get where Spence and Crawford are, has his latest test as he takes on Chris Van Heerden,” said Bellew to DAZN News about Benn having ambitions.

“I’ve seen a few interviews with Conor this week on DAZN saying he’ll fight anyone, but he must be a little more cautious and continue to listen to his team,” said Bellew about Benn needing to reign in his ambition.

Hearn has coddled the 25-year-old Benn by feeding him exclusively hors d’oeuvres in terms of opposition; it would take years before he’s ready to fight elite-level fighters like Spence, Crawford, Jaron Ennis, and Ugas.

You hate to say it, but Benn hasn’t been able to improve, thanks to the weak opposition his promoters had fed him.

“I was desperate to run before I could walk. I had a great team around me, and so does Conor. If he looks impressive against Van Heerden, then I think his dream of a huge fight will become a reality later this year,” said Bellew. 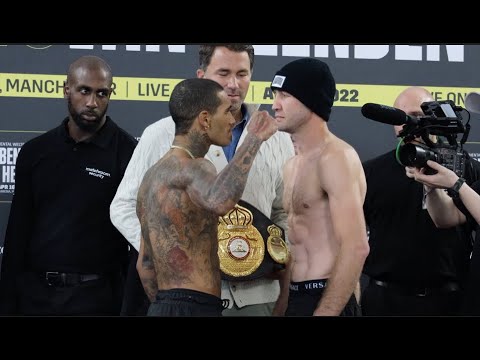