Without naming any names, De La Hoya feels that someone is trying to get Gervonta (26-0, 24 KOs) beaten by matching him against the knockout artist Rolly (14-0, 12 KOs) in this important contest.

De La Hoya suspects that because this is Tank’s last fight with Mayweather Promotions, they’re trying to get him beaten by Rolly, who is signed with them as well.

If Rolly beats Tank, Mayweather Promotions would have a new money-maker to take over. That would help cushion the blow of losing the popular 27-year-old Gervonta if Rolly beats him and becomes the new PPV star for the company.

Interestingly, boxing fans aren’t giving Rolly much chance of beating Davis despite the fact that he’s unbeaten, arguably punches harder, and looks like a full-blown welterweight inside of the ring.

“Ricardo Mayorga was a three-time world champion when I fought him,” said Oscar De La Hoya to Fight Hub TV. “But I love Rolly, I like Tank. Tank is a phenomenal talent. Tank is going to go a long way.

“The fact that it’s his last fight with Mayweather, and Mayweather did a tremendous job in promoting him,” De La Hoya continued. “There are rumblings that he’s going to leave Mayweather, who knows?

“I strongly feel that somebody out there is trying to get Tank beat by putting him in with Rolly. So, I don’t know what’s going on and happening, but maybe because it’s his last fight with Mayweather, they’re trying to get him beat.”

If Tank has made up his mind that he’s out the door with Mayweather Promotions, it makes all the sense in the world for them to want him to lose to Rolly. Why wouldn’t they want Rolly to beat Tank?

Rolly has made it clear that he has no intentions of leaving Mayweather Promotions, and that loyalty has got to be touching. He’s with them until the bitter end whenever that is.

What Rolly has going for him is his awkward style, size, power, and youth. Right now, Rolly can still make the 135-lb limit, but his days are numbered for the division.

it could be Tank’s bad luck that he’s fighting Rolly while he can still make the 135-lb limit because this guy should be fighting at 147 with his size and strength.

Tank did a good job in moving up to 140 to dethrone WBA champion Mario Barrios, but that guy lacked Rolly’s power, size, and toughness.

If Tank has to take the kinds of shots from Rolly that Barrios was hitting him with last June, he could be in trouble.

Boxing fans might have forgotten how Floyd Mayweather Jr. needed to go to Tank’s corner after the seventh round to give him an inspirational speech because he was looking so bad against Barrios.

“I love that fight, I think it’s a pick ’em fight,” said De La Hoya on his view of the Gervonta vs. Rolly clash on May 28th.

“I think Tank is a tremendous talent, and I think Rolly has that knockout punch power that comes from the knees. I think it’s great for boxing but I love that fight,” said De La Hoya. 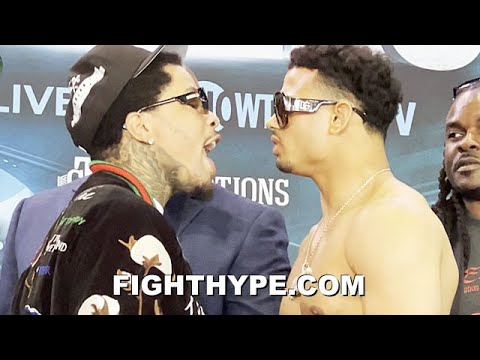