By Dan Ambrose: Canelo Alvarez and his trainer/manager Eddy Reynoso rejected the idea of a 171-lb catchweight or rehydration clause for their title fight against WBA light heavyweight champion Dmitry Bivol on May 7th.

Promoter Eddie Hearn confirms that the superstar Canelo (57-1-2, 39 KOs) and Reynoso want the fight with WBA champion Bivol (19-0, 11 KOs) to occur at the full 175-lb weight for the light heavyweight division without the benefit of a handicap as an aid.

Boxing fans will be glad to know the 31-year-old Canelo won’t be trying to stack the deck in his favor to increase the odds of him defeating the unbeaten Bivol, seeing that he’s used catchweights in the past.

The reality is that a catchweight and/or rehydration clause wouldn’t help Canelo against Bivol, considering that he’s a small, light heavyweight who can easily make 168 without being drained.

Bivol doesn’t gain much weight after making the 175-lb limit for his fights at light heavyweight, meaning that it would serve no purpose for Canelo to use his A-side position to force a catchweight or rehydration clause in a take-it-or-leave-it manner.

It would just make Canelo look pampered and further cement the view some boxing fans have about him needing advantages to beat talented opposition.

“Canelo and Eddy [Reynoso] said, ‘No catchweight. If this is for the 175-lb world title, that’s the way it’s going to be.’ And rehydration clause doesn’t exist,” said Hearn.

You’d like to give Canelo credit for rejecting the catchweight and rehydration clause for the fight, but given that it wouldn’t have worked against a fighter like Bivol to get an edge on him, it’s hard to give the Mexican star kudos for turning it down.

If anything, a rehydration clause and catchweight would have negatively impacted Canelo much more than it would for Bivol because the Mexican star looks as big as a house after he rehydrates for his fights.

Bivol is from Russia, and like many people from that part of the world, he’s lean and doesn’t put on a lot of weight in between fights. He’s disciplined and not someone fighting out of his weight class.

Nowadays, it’s become the norm for fighters to compete in weight classes much lower than their natural weight. The fighters drain down 15 to 20 lbs to game the system by fighting smaller guys to get an edge.

Once they rehydrate, they’re much bigger than their opposition. Hence, the name ‘Weight bullies.’

Unfortunately, there are so many fighters that tend to do this, and it’s too bad boxing doesn’t get its act together by returning weigh-ins to the day of the fight. Even if they did, fighters would likely find a loophole to quickly gain 10 to 15 lbs before entering the ring.

You’d have to place the weigh-ins within minutes of the fight to keep fighters from finding a method to pack on the water weight. It’s sad, but that’s likely how it would go if weigh-ins took place on the same of the fight. 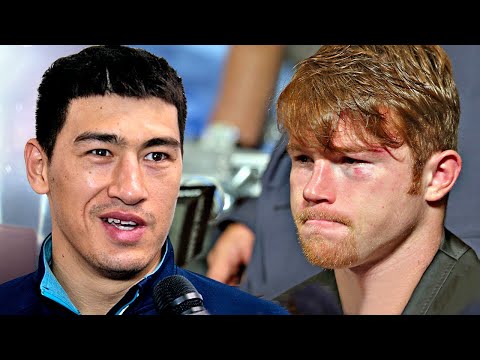