THE MASSIVE HEAVYWEIGHT clash between WBC champion Tyson Fury and the challenger Dillian Whyte on April 23 sold in huge numbers today – 85,000 tickets were purchased within 3 hours!

Fans are advised that only a limited number of tickets remain. A small number of Ticketmaster’s Platinum tickets are still available online, while 5,000 coach tickets are yet to be released. Details for the sale of the remaining coach packages will be announced in the coming days and will be available via Ticketmaster.co.uk.

Tickets for the all-British collision that takes place on St George’s Day at Wembley Stadium connected by EE, promoted by Queensberry in association with Top Rank, shown live on BT Sport Box Office in the UK and Pay-Per-View in the US, went on sale at noon on Wednesday via Ticketmaster and the demand was instant and at a staggering level. Peaking at 170K in the virtual queue on Ticketmaster.co.uk and drew the comment from our ticketing partners: “Tyson is a rockstar, he could have sold-out three Wembleys today!”

Promoter Frank Warren commented: “I always imagined that this fight wouldn’t be a hard sell so I am happy we opted to stage it in the biggest and best venue in the UK. This illustrates just what a big draw Tyson has become, his personality is infectious and he truly is a champion of the people.

“He is also the No.1 heavyweight in the world and one of the most recognised sportsmen on the planet. I am thrilled that we are bringing him back to Britain to perform on the biggest stage of all against Dillian Whyte and a domestic dust-up that will be the biggest boxing event of the year.

“I would like to take this opportunity to thank the fans for their incredible support of this event and we will be in for some night on April 23 at Wembley Stadium.”

Fans are asked to follow Queensberry Promotions on social media for further ticket announcements, and we look forward to an historic night of heavyweight boxing at the national stadium on St George’s Day!

“It’s been a roller coaster of a ride, across the Atlantic Ocean in the exotic venues of MGM Grand, T-Mobile, Staples Center. I just feel like the song {by} Thin Lizzy, ‘The Boys Are Back in Town.’ Four years away, and I get to come back and showcase on the world’s biggest stage at Wembley Stadium, 100,000 people there.

I’m just putting it on so the fans can come, the people who traveled to Las Vegas… not everyone was able to come. For the people who stayed up to five in the morning to see those fights on BT Sport, now they can come and enjoy an event on home soil and be a part of history. People will be talking about this event and saying, ‘Where were you when this happened?’”

“I know Dillian Whyte is going to come in prepared. He’s going to come in rugged and rough and game and aggressive. And he’s got a big left hook and a big right hand. Who knows? It could be me chinned on the night. I think both fighters are going for the knockout on the night. I just think when I land a ‘Lancaster Bomber’ on his jaw, it’s going to be over. That could be in round one, or it could be in round six. I don’t see it going past that. I’m looking to put on an excellent {fight} and showcase knockout boxing for the UK fans and then sing a load of songs afterward and have a good time. Party on down in the big smoke!’”

“This man is a big old strong fellow who swings a big old punch in and knocks a man spark out if he connects. But if I’m daft enough to get hit off him and knocked out, then I don’t deserve to be heavyweight world champion.”

“I don’t blame him for not being here today because if he were here, I’d have probably stretched him at the press conference. It’s good he’s not here, otherwise, I’d be remanded in a London jail cell somewhere. The buildup to this fight will be fantastic because Tyson Fury versus his own shadow sells for sure. I will make sure people are entertained.”

“My personal message to Dillian Whyte today is this: I will win this fight for England and for St. George on St. George’s Day. There we go.”

“He should be here promoting the fight. That’s my opinion, and I think it’s tough luck for him and his family and his legacy going forward.”

“I’m delighted. It’s great. We’re at Wembley. I think we’re going to sell out just under 100,000 capacity. It’s going to be a special night because you have the lineal champion, the WBC champion who has not been here for four years, not fought in the country for four years.”

“The atmosphere is going to be brilliant. All we need — unfortunately he is not here today — is the other side of the card to show up.”

“Whyte is certainly a credible threat and is one of the top available contenders. It is unprofessional that he is not here today but we will get past that and move on. Everyone is second best to Tyson, in the ring, in personality, in everything.” 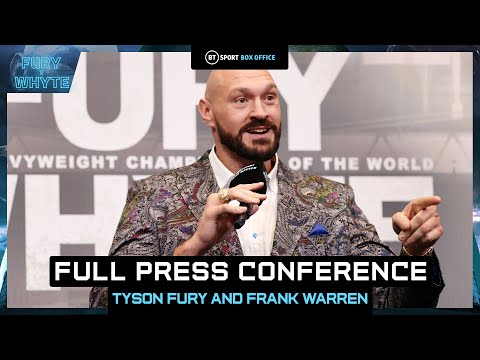 
« Berlanga vs. Rolls & Zayas vs. LaVallais on March 19th, LIVE on ESPN