Shakur Stevenson explains why he didn’t sign with Mayweather

By Chris Williams: Shakur Stevenson says he chose not to sign with Floyd Mayweather Jr. when he turned professional in 2017 after he showed him a poster with his picture much smaller than the other three fighters.

Stevenson (17-0, 9 KOs) says that poster that Mayweather showed him put him off, making him reluctant to sign with him. Shakur says he didn’t see himself as being below the other fighters on the poster, and he felt that he should have been put up alongside them.

In hindsight, Mayweather should have thought twice about showing the 2016 Olympic silver medalist Stevenson, a fighter that he was trying to sign, a poster with his face down below other fighters.

Instead of Stevenson signing with Mayweather Promotions, he went with Top Rank after meeting with them and Bob Arum. Stevenson liked the vibe from them, and he said he liked that they were going to show his fights on ESPN.

More importantly, Top Rank had a quick path for Stevenson to get a title shot, which he got in his second year as a professional in 2019.

“A lot of people look at that situation and say, ‘Yeah, you should have went with Floyd,’ but I’m going to say what it is,” said Shakur Stevenson to Cigar Talk on why he chose not to sign with Floyd Mayweather Jr. when he turned professional in 2017.

“It’s just certain things that I tolerate and don’t tolerate,” Shakur continued. “I got around certain people and they kind of helped me out with my career. Floyd didn’t want to be involved in that, and didn’t want to accept the real part.

“So, it ended up that I did it my way, and I went with team that I felt was the better team for me. I feel like right now it’s paid off. Yeah, it was [difficult not to ink with Mayweather] because Floyd was calling me on the phone.

“He’s like, ‘You could drive a Bugatti.’ He’s in your head, but you still know in your brain, ‘I know what I’m worth and what my career means at the most.’

“I know me personally. Once I seen that, I’m like, ‘Hell, no. I’m cool.’ I know what I am and what I bring to the table. I’m going to take over the sport. Don’t put me on no flyer with no small like [photo]. I’m a big star. I need to be there right next to Tank and whoever else and is leading the company.

“I guess at that time, he didn’t see the bigger picture, but I still talk to Floyd to this day. When I seen that poster thing, I don’t know how he was looking at me. If he’s looking at me like I’m a normal fighter.

“Some normal fighters in his roster, don’t get that type of shine that Tank gets. So, Tank comes up to his gym all the time, and they have a certain relationship. He’s looking at Tank, like he’s got him on this pedestal, which he is. I respect Tank. I can’t take anything away from Tank.

“I just feel like I didn’t know how he [Mayweather] was looking at me. So, it made me kind of like, ‘Uh.’ I’m going to just sit back because I don’t know if he’s looking at me the same way that I look at myself,” said Shakur.

Mayweather should have thought twice before coming up with the idea of showing a poster with Stevenson below the other fighters. Perhaps Mayweather thought that Stevenson wouldn’t mind viewing himself in a smaller photo, and would view it as a situation where he would have climb his way to the top to be at the same perch as the other fighters on the poster.

Stevenson didn’t say who the other fighters were on the poster, but it wouldn’t be surprising if Gervonta ‘Tank’ Davis was one of them.

He’s the #1 fighter in the Mayweather Promotions stable, so it would make sense for him to be one of the three fighters that were in the central spot in the poster.

“They got a great machine, a great system,” said Shakur on why he signed with Top Rank. “They made sure I was fighting on ESPN, and they made sure that I got a certain amount of fights per year. They put me in a position to become a world champion quickly fast in boxing.

“There was a bunch of stuff that played a part. They looked at me like I was who I was. I liked the way they looked at me. Right now, we’re trying to get bigger and develop even more.

“That was one of the first things that I went in their [Top Rank] office and said. I sat there right in front of Bob [Arum] and I told Bob, ‘I’ve been hearing that you’re racist like.’ I sat there and told him that face-to-face.

“He told me he wasn’t and explained to me a lot of situations and it was cool. I caught a cool vibe from the office and Top Rank. I didn’t get the racist vibe from them at the time.

“I definitely went in there and let him know, ‘I’ve been hearing your racist. You got to let me know what’s going on,” said Shakur.

Top Rank has obviously done a good job with Stevenson. He’s now a two-division world champion heading into a unification fight with WBC super featherweight champion Oscar Valdez on April 30th. If Stevenson wins that fight, he’s going to be on the express trip to the top. 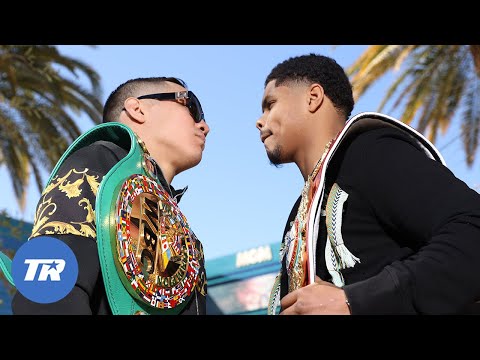 
« Jermall Charlo vs. Jaime Munguia talks have broken off