Garcia vs. Tagoe At The Alamodome on April 9, LIVE on DAZN

The fighters were on site alongside Oscar De La Hoya, Chairman, and CEO of Golden Boy, and DAZN’s Executive Vice President, Joe Markowski, to discuss their upcoming 12-round, a lightweight battle on April 9.

The fight is set to occur at San Antonio’s Alamodome, live, worldwide on DAZN.

Below are what the attendees had to say today:

“I’m very excited; it’s been a long time. Tagoe is a legitimate contender; I have nothing but respect for him. He has an ample opportunity here; he’s been looking for a tough fight, a fight that will make or break him; and I am looking forward to a dog fight if it happens to be one.

“I am not looking past him, whether people think he is a good contender or not, and I respect him, and I know this will be a good fight.

“I have been boxing my whole life. I know what it takes. I know the discipline you need, the sacrifices you have to make. What makes me feel confident in all my experience in the ring; is over 200 amateur fights, 21 professional, and being in some top training camps. I feel very comfortable and confident. I know whoever is in front of me, it will not be easy, that’s for sure. If it’s a quick or a long flight, I am ready for whatever.”

“I want to thank my promoter Lou DiBella and manager Peter Khan for giving me this opportunity to showcase myself to everyone. I know people don’t know me, but after this fight, people will ask, who is this guy!?

“I know Ryan Garcia, I respect him a lot as a good boxer, but he is not my style.”

“For Tagoe, to lose his professional debut and have an undefeated record after that for many years shows that he has tasted defeat, but he doesn’t want to taste it again, which makes him very, very dangerous.

“Ryan has been off for 15 months, and we are glad that he is back. He is healthy and ready to go, but he knows that this is not a walk in the park.

“Ghana has some amazing boxing history with Azumah Nelson and Ike Quartey. I know it’s going to be an excellent fight. I know both guys will be ready; both guys will get into the ring with nothing to lose and with everything to lose. If there is someone who knows fighters like Tagoe, it’s me. I can see it in his eyes.”

“Ryan is a longtime DAZN fighter who moves the needle in a way that many soldiers don’t. We applaud your bravery for speaking about your struggles, and we are delighted you are healthy and ready to fight on DAZN.

“Ryan starts some amazing content on DAZN; this fight is not going to be a walk in the park. My friend Lou DiBella has been talking to me about Emmanuel Tagoe for some time. Those of you who know Lou when he talks have to listen. But he has been talking about this matchup for a while, and we are excited to be hosting it.”

“Hi everyone, Ryan Garcia is one of boxing’s most talented young stars, and it’s good for the sport to have him back. I want to commend Ryan on his honesty and mental health advocacy.

I think his honesty will help many people battle the stigma associated with mental health care. I want to thank Ryan and Golden Boy Promotions for giving Emmanuel Tagoe, yet another talented, hungry fighter from Ghana, an opportunity to show his talents on the world stage.

With Ryan’s immense popularity, he and his promoter could have come back against anyone. In Tagoe, they chose a legitimate and dangerous contender, who has won his last 32 fights.

Emmanuel isn’t an easy touch; he’s a real threat. I applaud Ryan and Golden Boy Promotions for seeking this kind of challenge, and I look forward to a great fight on April 9.” 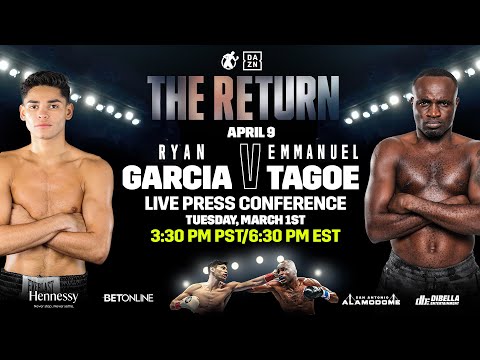 The Alamodome on April 9 will be a night full of exciting action as popular fighters make their grand return to the ring for the first time in 2022. Houston’s Marlen Esparza (11-1, 1 KOs) will take on Tokyo’s Naoko Fujioka (19-2-1, 17 KOs) in a 10-round fight for three world titles, the inaugural Ring Magazine Flyweight World Championship, the first-ever in the women’s flyweight division, and the WBC and WBA Flyweight World Championships. The historic three-title showdown will be featured as part of the undercard for Ryan Garcia vs. Emmanuel Tagoe in San Antonio, Texas, live, worldwide on DAZN. Also, part of the DAZN live stream, “King” Gabriel Rosado (26-14-1, 15 KOs) of Philadelphia, PA, will face-off against Shane Mosley Jr. (17-4, 10 KOs) of Pomona, CA in a 10-round fight for the WBA Continental Americas Super Middleweight title.

“I am training hard and excited for my return to San Antonio,” said Marlen Esparza. “We are both champions, and we get to fight for the first-ever Ring Magazine Women’s Flyweight World Championship. Fireworks are what you can expect on April 9.”

“I am grateful to Goldenboy and everybody making this fight happen,” said Naoko Fujioka. “I believe that my last victory against Sulem Urbina opened the door for this bigger opportunity to fight Marlen Esparza and unify world titles. I’ve never been more excited. I am ready to go to her backyard and win!”

“I’m excited to get back and start the new year with a bang,” said Gabriel Rosado. “I’m back at 168, where I feel more comfortable. I won’t take Shane Mosley Jr. lightly, this is a big step-up fight for him, and I expect him to be at his best. I’m looking forward to making a run at the super middleweight division, and Shane Jr. is in my way. I respect his father, who is one of the best to do it. So this fight is nothing personal, it’s strictly business, and I plan to get the job done and put on a show for the fans in San Antonio, Texas! Get your popcorn ready, the ‘King’ is back!!!”

“I’m excited for the opportunity to fight on such a great card, and I can’t wait to get back in the ring,” said Shane Mosley, Jr. “This is going to be my first fight in 2022, and I am ready to show fans an exciting show on April 9.”

“We are excited and proud to put on a fan-friendly undercard for the anticipated matchup between Ryan Garcia and Emmanuel Tagoe,” said Oscar De La Hoya, Chairman and CEO of Golden Boy. “We always want to keep the fans in mind when we put together fights, and I know they will be glad to witness history in the making when #1 world-ranked Marlen Esparza faces #2 Naoko Fujioka for the inaugural Ring Magazine Flyweight World Championship. Both fierce fighters will also put their WBC and WBA Flyweight World Championships on the line for the honor of being crowned the unified female flyweight world champion. Also on the live stream, exciting warriors, Gabriel Rosado and Shane Mosley, Jr. will face off in a fan-friendly bout. This is a major test for both fighters as they both move up to super middleweight in a bid to forge a new path in the sport. I am so excited for this event; I can assure fans that San Antonio will be the place to be on April 9.”

“King” Gabriel Rosado of Philadelphia, Pennsylvania, is a world-class warrior with an exciting style that has won him the admiration of boxing fans worldwide. He was last seen in the ring in one of the best performances of his career, facing the undefeated Jamie Munguia at the Honda Center last November. Although the decision was not in his favor, he received massive acclaim for his performance. Earlier in 2021, Rosado scored a sensational knock-out victory over previously undefeated fighter Bektemir “The Bully” Melikuziev, a victory that proved Rosado still was a force to be reckoned with in the sport. Now moving up to super weight, a weight class more comfortable for the boricua fighter, Rosado is ready to climb the ranks in the division when he faces Shane Mosley Jr. on April 9.

Second-generation fighter, Shane Mosley, Jr. of Pomona, CA, is looking to get in the ring and score a victory after a controversial loss via majority decision to Jason Quigley in May 2021. The 31-year-old is willing to leave it all in the ring on April 9 and is looking for a fresh start fighting for the first time at super middleweight. A victory against Rosado, an experienced warrior, and world title contender, would establish Mosley, Jr. as a true rival in the super middleweight division.

Garcia vs. Tagoe is a 12-round lightweight fight presented by Golden Boy in association with DiBella Entertainment. The event is sponsored by Hennessy “Never Stop. Never Settle,” and “BetOnline – Your Online Sportsbook Experts.” The fight will take place on Saturday, April 9, and will stream live exclusively on DAZN, worldwide.