By Barry Holbrook: Michael McKinson says he’s willing to face Blair Cobbs or Alexis Roach in the main event this Saturday night after his original opponent unbeaten #1 WBO welterweight contender Vergil Ortiz Jr. dropped out due to a medical problem.

McKinson (21-0, 2 KOs) says he put in four months of hard work training for the fight with Ortiz, and he has family traveling over from the Uk already to see him fight.

After all the hard work that he put in, McKinson says he’d still like to fight on Saturday night against anyone that Golden Boy Promotions can find for him.

Welterweight prospect Blair Cobbs (15-0-1, 10 KOs) called out McKinson, saying he’d be willing to fight him in the main event. However, Cobbs is already scheduled to fight Alexis Rocha (18-0-1, 12 KOs) on the card, and it’s unlikely his promoters at Golden Boy would want to cancel that fight. If they did, they’d need to find a replacement for Rocha.

The fight card will be shown on DAZN and will be taking place at the Galens Center in Los Angeles, California.

“They don’t need to do me any favors, do they?” said McKinson to iFL TV about Golden Boy Promotions not needing to find a replacement for him to fight this Saturday after Vergil Ortiz Jr. pulled out due to medical reasons.

There are some boxing fans on social media who believe that the main reason for the 23-year-old Vergil Ortiz Jr. pulling out was because he was struggling badly to get down to the 147-lb limit. He wasn’t going to make it and fell ill from the grueling weight drain process.

“The fight thing for them to do would be to try their very best. I heard they still want me on the show. I haven’t heard anything yet. At the moment, I’m just waiting on updates to see if they can.

“I’m here to fight, I’m here to put on a show for the Americans. I’ve seen Blair Cobbs has called me out on Instagram and Twitter. He’s a character, isn’t he? He’s a proper character.

“I’d take Golden Boy straightaway. I’d take any of them [Cobbs or Alexis Rocha] in the main event now. I was prepared to fight Vergil Ortiz,” said McKinson.

Cobbs isn’t ready for a tricky fighter like McKinson, and his promoters realize that. At 32, Cobbs is still painting by the number system in the sport, and he’s not ready for a fighter with the kind of technical skills of McKinson.

To prepare for a fighter like McKinson, it would take a novice like Cobbs months and months, and even then, he’d likely be over his head.

“Although their southpaws, I’m good with southpaws,” said McKinson. “I spent several weeks with Josh Taylor not long ago. But yeah, I’ll fight any of them. I don’t know anything yet.

“I’m here to fight and I’ll fight them or anyone else they want to offer me. They’re fighting each other, which is a great fight for the fans and all. Why do they want to fight me? Am I a bigger draw? I don’t understand,” said McKinson in failing to realize that he’s ranked #4 with the WBO at 147. If the non-top-tier welterweights Rocha or Cobbs were to beat him, they would receive a top 15 ranking from that win.

“I was surprised when I saw that animated video of Blair Cobbs, but people are talking at the moment. Hopefully, I can get on the show. Whoever they get me,” said McKinson. 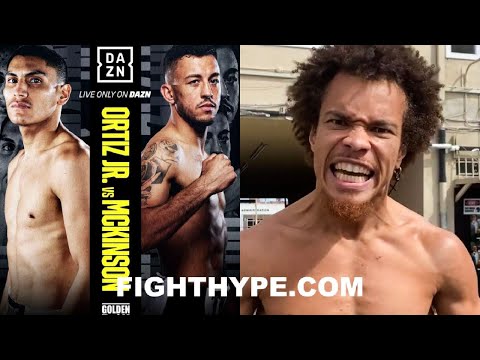