Josh Taylor willing to rematch Catterall at catchweight for NO titles

By Barry Holbrook: Undisputed light welterweight champion Josh Taylor has changed his mind about not wanting to give Jack Catterall a rematch, but he says the idea he has is for them to fight at a catchweight at welterweight with NO titles being on the line.

Taylor feels that it’s too difficult for him to make the 140-lb limit, so he’s moving up to welterweight at 147. In theory, a catchweight at 143.5 lbs would be doable for Taylor, and he wouldn’t be drained, but it arguably won’t help Catterall.

That’s not going to help Catterall, though, because he can make a lot of money by beating Taylor to become the undisputed 140-lb champion.

Catterall won’t benefit from fighting at a catchweight

Fighting Taylor at welterweight in a catchweight contest with no titles at stake won’t help Catterall because if he wins, he still won’t have the four titles.

Taylor plans to move up to 147 and vacate his four 140-lb titles, which would fragment them, making it impossible for Catterall to get a shot at all four titles.

Under that scenario, Catterall would wind up likely facing #2 Arnold Barboza Jr. for the vacated WBO light welterweight title only and not the IBF, WBA, and WBC.

As such, Catterall vs. Barboza Jr wouldn’t be a  big fight and wouldn’t pay the same kind of money as a Taylor-Catterall rematch with all four belts on the line.

Catterall (26-1, 13 KOs), who feels he deserved a victory in his fight with the four-belt 140-lb champion Taylor (19-0, 13 KOs) in their match last month on February 26th, likely won’t go for the idea of a rematch taking place at welterweight for no belts.

Fighting at home in Glasgow, Scotland, the 31-year-old Scottish fighter Taylor was given a 12 round split decision by the scores:

Unfortunately for Taylor and the two judges that gave him the victory, the boxing public didn’t agree with the decision. They felt Catterall deserved the win, and they wanted to see a rematch or the results overturned.

The British Boxing Board of Control (BBBofC) are currently investigating the fight’s results. They could order a rematch at best, but it would likely be up to Taylor whether he would be willing to agree to it.

With him planning on vacating all four belts at 140, he can’t be forced into a rematch with Catterall because he has no intention of keeping the straps.

“Of course, I think he deserves it,” said Josh Taylor to Sky Sports News when asked if Catterall deserves to fight for a world title again.

“We can have a fight again with Jack; why not. I’m certainly open to it.

“Most likely at a catchweight. I can’t make the weight anymore safely; I don’t think. So we’ll see how it goes, but I’m keen for a rematch,” said Taylor.

Moving up to 147 could prove to be a fruitless move by Taylor, who seems to be under the impression that the grass will be greener at welterweight and that he’ll be able to find the form he had in his best years at 140.

The cold, harsh reality is that Taylor’s chances of finding the same kind of success at 147 that he enjoyed at 140 are slim and none.

We’re probably going to see Taylor’s career quickly peter out with him losing to WBO 147-lb champion Terence Crawford and soundly beaten by talented young lions Jaron ‘Boots’ Ennis and Vergil Ortiz Jr. should he choose to fight them.

It’s predictable that in a year or two after Taylor suffers two or three losses at welterweight, he’ll be pining away for the good old days at 140 and will return to the division to try and rekindle his sagging career.

“So the best scenario we feel is that they could enforce the rematch,” said Catterall’s trainer Jamie Moore to Sky Sports News on wanting a second fight with Taylor.

“But he’s only mandatory for the WBO, so in itself then lies a problem. You’d like to think that all the governing bodies would then decide that Jack was hard done by; it was a very controversial decision, and let him fight for all the belts.

“It was three rounds for Catterall. Could it have been a draw? Not really, but Catterall won the fight, but one of the scorecards was 114-111 to Josh Taylor,” said Eddie Hearn last Saturday night in giving his view on the Josh Taylor vs. Jack Catterall fight.

“You can’t say that Josh Taylor won that fight by three rounds. Bob Arum did. It’s difficult when you represent a fighter, and you get asked a question after a fight; it’s hard to go against the fighter.

“I’ve done it a few times recently, and the fighter doesn’t really like it, but you have to be honest at the same time.

“I don’t feel like it was the worst decision of all time, but Josh Catterall won,” Hearn said of Taylor’s controversial win over Catterall on February 26th in Glasgow, Scotland.

“This kid, it wasn’t one belt, it was every belt [at light welterweight that was on the line for the Taylor – Catterall fight]. So this kid [Catterall], the outsider, who was going to be the undisputed champion and was robbed away from it.

“It’s not just the British Boxing Board of Control. It’s boxing. We see bad scorecards all the time, but sometimes the Commissions just want to protect their officials.

“In incompetence, unquestionably,” said Hearn when asked if the bad scoring is a product of corruption or incompetence by the judges.

“Listen, I’ve been around boxing for 35 years and promoted fights for 13 years. There is no corruption in boxing with these judges,” said Hearn. “Do they have a preconceived opinion of something? Maybe.

“If you get it wrong like with any job, you have to be held accountable. I want to see new talent or new officials coming into the sport. It’s the same old faces. You see them at ringside all the time.

“The same judges that when I first started promoting with the British Boxing Board of Control. Good judges, good people, but I’d like to see new blood. 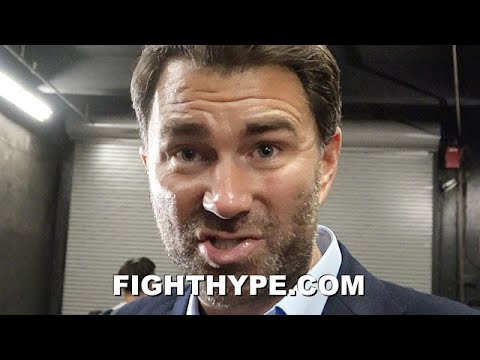