Should Daniel Jacobs retire after loss to John Ryder?

An exhausted and old-looking Jacobs was in full retreat for the last six rounds, clinching at every opportunity, moving, and not showing much offense.

The punches that Jacobs did throw were desperate single shots as if he was trying to hit a homerun to bail himself out against the younger, better-conditioned Ryder.

Another poor performance from Jacobs

Despite the fight being close and the controversial results, it was the second consecutive disappointing performance for 35-year-old Jacobs.

It’s fair to say that the defeat for Jacobs could be a sign that Jacobs needs to retire after 15 years in the sport.

Fighters that have caused Jacobs problems:

Put it this way. If Jacobs can’t beat fighters at 33-year-old Ryder and 36-year-old Gabe Rosado’s level, he surely isn’t going to have a chance of capturing a world title at 168, be it against undisputed champion Canelo Alvarez or WBA ‘regular’ champion David Morrell Jr.

Those guys would have trounced the version of Jacobs we saw last Saturday night.

Immediately after the fight, the former IBF/WBA 160-lb champion Jacobs disappeared without staying around to give interviews to talk about his reaction to the scoring by the judges and talk about what’s next for him.

Jacobs will be kidding himself if he protests too much about the decision for the fight, as he didn’t fight the way he needed to in Ryder’s backyard in the second half of the contest to earn the victory.

If your game plan is to spoil for 12 rounds in your opponent’s hometown, you’re likely to lose, and that’s what we saw last Saturday night with Jacobs fighting the wrong way to try and win against hometown fighter Ryder.

Jacobs will likely continue his career as long as DAZN and promoter Eddie Hearn give him well-paying main event fights on their cards.

Where we’ll likely see Jacobs retire is if he’s moved to undercards as either the chief support or buried at the #3 or #4 spot.

When you’re buried that low on cards, you’re not going to make a lot of money. With the cash Jacobs has been accustomed to getting in the last ten years, he’s not going to be happy fighting on undercards.

According to Celebrity Net Worth, Jacobs’ net worth is $10 million, so he doesn’t need to continue fighting if he’s not being given choice headliner spots.

Ryder chose not to go for the kill

“I thought I was in front for the majority of the fight, but I’ve got to watch it back,” said John Ryder to Intu Boxing following his win over Jacobs.

“I think you’ve got to respect what Danny Jacobs has done in the sport. He’s had a long time out of the ring, so I wasn’t sure how he was going to come out,” Ryder said on why he was cautious in the first six rounds.

“You saw what he did to Peter Quillin in the first round of their fight [in 2015]. We saw early doors that his power wasn’t what it once was. When Danny Jacobs is hurt, that’s when he’s dangerous, and that’s when he’s throwing wild shots.

“You’ve got to be on guard and prepared for what’s coming back,” Ryder said when asked why he didn’t attempt to finish Jacobs after hurting him in the eighth round.

“I’ve not won too many 12 round decisions, which is strange. But it was great to go in there with a great fighter like Danny Jacobs and come away victorious.

“I’m going to see what options come and see what the best options are for us.

“I felt like I needed a good performance and get the bit between my teeth and pull it out,” said the 33-year-old Ryder about putting pressure on himself to get the win. It was a close fight.

“I didn’t feel like I would get Danny Jacobs out of there at any point, and I was satisfied with a 12 round decision victory. You’ve got to respect Danny. What he’s achieved inside the ring, and he’s a heck of a fighter,” said Ryder. 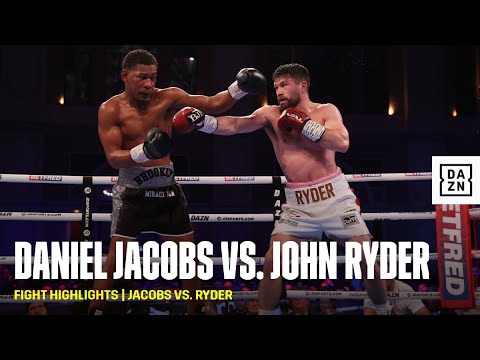 
« Teofimo Lopez could be trained by Eddy Reynoso as new coach