By Matt Lieberman: Undisputed light welterweight champion Josh Taylor says he will give challenger Jack Catterall a “good solid beatdown” on Saturday night when they meet at the SSE Hydro in Glasgow, Scotland. The two will meet in the main event and be shown on ESPN+.

Even if Catterall had smothered Taylor with compliments, he’d still be getting a beatdown, so it doesn’t matter. Taylor is one of those fighters that like to inflict pain on his opponents for general-purpose sakes.

We saw Taylor drop Jose Ramirez once and catch him several times in the fight with those shots.

“All the talking is done. I just want to get my hands on Jack Catterall and batter him,” said Josh Taylor to iFL TV. “I want to get in there and give him a good solid beatdown. I think so,” said Taylor when asked if it was going to be a long night for Catterall on Saturday.

“I’m going to outright him, outthink him, and it’s going to be a long, painful night for him,” said Taylor.

Catterall doesn’t have experience against anyone near the same talent as Taylor, making it impossible to judge how well he’ll do.

On Saturday night, we’ll find out how good Catterall is or isn’t when he steps foot inside the ring to challenge Taylor.

“I feel like I’m always improving. I’ve only been a pro for five years and only had 18 fights. So I’m still improving,” said Taylor.

“I’ve still not reached my peak. I feel like I’m getting better and better. I’m going to put on a good performance. I’ve been working on things in the gym and doing it well, so I’m looking forward to it.

“They always say this, and I’ve had this question, and I’m sick of being asked that,” said Taylor when asked if it’s getting easier for him to make the 140-lb limit.

“I saw something the other day with someone doing an analysis. ‘How many times can he go to the well and keep making this weight? He’s 31-years-old.’ I’m blessed with great genes.

“I make the weight easily. I’ve got a good fast metabolism, but now the most important thing is I’ve got a team around me helping me.

“Whatever he brings, I’m more than ready for,” said Taylor about being ready for Catterall. “If he comes and boxes, it’s a boxing clinic for me. If he comes and wants to fight and go onto the front foot, he walks into a big shot, and he’s on his backside.

“I can’t see how he beats me on Saturday,” Taylor said. “Perfect, absolutely perfect. That’s fine with me,” Josh said when told that Catterall noted that at times he wants to stand in the center of the ring and have a dog fight with him,” said Taylor.

If Catterall had punching power, he’d have a shot of winning, but he’s lacking in that area. Unfortunately, the only path to victory for Catterall is to try and outbox Taylor, and that’s going to be challenging to do.

“I’ve said this in interviews that his record doesn’t suggest it, but you can see from watching him with the way he throws his punches, he’s heavy-handed,” said Taylor. “But he’s got to catch me with it.

“Listen, Jack Catterall, his dream is coming to an end on Saturday. These belts aren’t going anywhere. For my fans, new and old, thank you very much for all the support,” said Taylor. 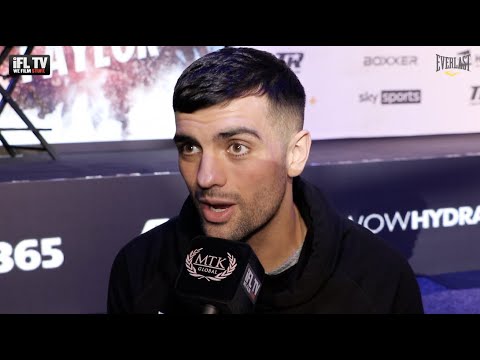 Chris Colbert: ‘Rolly is a bum, Gervonta Davis will knock him out’ »