By Scott Gilfoid: Eddie Hearn admits that he royally blew it by not choosing to sign an out-of-shape Tyson Fury in 2018 when he chose to launch his comeback after returning from a three-year absence. Talk about a major blunder.

Instead of signing Fury, Hearn thought Anthony Joshua, the controversial 2012 Olympic gold medalist, was going to be a star with staying power. Joshua, unfortunately, appears to be finished, and Fury shot past him and is now the #1 heavyweight on the planet.

Fury could have been the flagship fighter for Hearn’s Matchroom Boxing stable, but he blew it by failing to sign him and whip him into shape. He was like a diamond in the rough, just waiting to be polished.

Rather than ink Fury, Hearn stuck with the heavily muscled Joshua, who has turned out to be fools gold and he’s now watching his career sink into the quagmire.

Although Hearn could probably save Joshua’s career by steering him back towards the weak opposition that he’s mostly been fighting since he signed him in 2013, AJ is insisting on fighting quality and he’s not good enough.

Joshua lacks the talent that Fury possesses, and his career is about to be finished in 2022.

Hearn says he met with the overweight Fury in 2018, and just looking at the physical state he was in at the time, he surmised that he would never fight again.

Poor Hearn, he could have had the Fury goldmine, but instead, he’s stuck with a played-out mine that produced very little of the precious yellow metal.

Eddie Hearn made a snap judgment on Fury

Like George Foreman when he lost over 100 lbs for his comeback in the late 1980s, Fury couldn’t lose all the pounds that he packed on while living it up after his big win over the then pas his best 39-year-0ld Klitschko seven years ago.

Hearn was okay with Fury taking a couple of tune-ups and then stepping it up to face Manuel Charr. At the time, Hearn didn’t know that Fury would challenge then WBC heavyweight champion Deontay Wilder in just his third fight of his comeback. 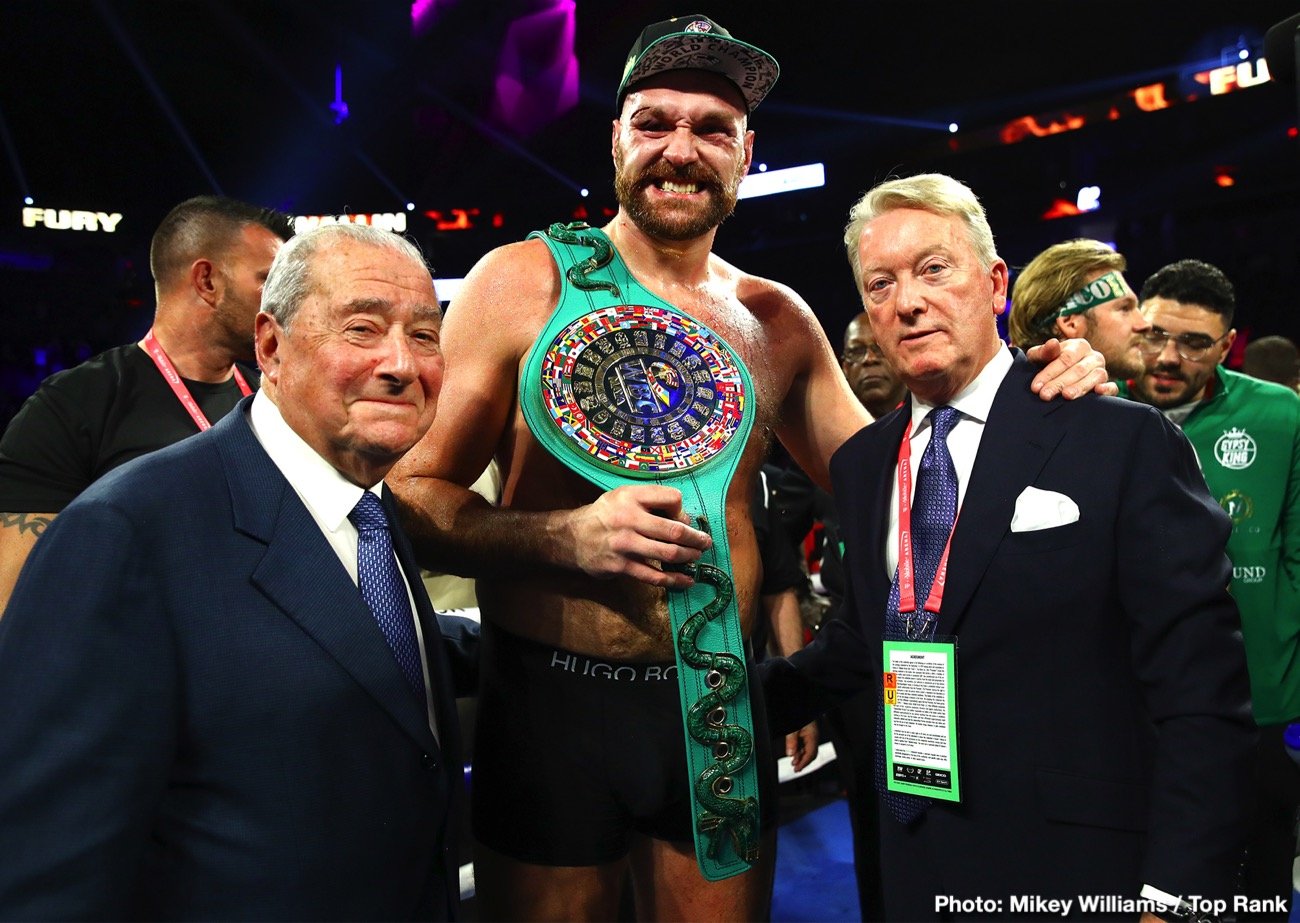 If Hearn had known that, he would have readily inked Fury and done well with him, as Top Rank has. What Hearn was obviously wary about is signing an obese Fury, and then watching him fight low-level opposition for ages, but never return to the elite-level that he’d been.

At the time what made it easy for Hearn not to pull the trigger on inking Fury is that he had Anthony Joshua as part of his Matchroom Boxing stable.

Things might have been different if Hearn didn’t have Joshua as part of his stable because he would have been needy, and signing the out-of-shape Fury would have given him at least one recognizable heavyweight.

Gilfoid remembers watching Joshua win his Olympic gold medal in the LONDON Olympics in 2012, thinking that he was gifted the medal.

Joshua appeared to lose to three of his matches to Erislandy Savon, Roberto Cammarelle, and Ivan Dychko, and it was clear from watching that AJ didn’t deserve the gold.

Moreover, it was obvious that Joshua wasn’t good enough to win and hold down a heavyweight title in the pro ranks unless he was skilly matched by a craft promoter.

Hearn did a good job of lining Joshua up to win the IBF title from the vulnerable paper champion Charles Martin in 2016, WBA title against the over-the-hill 39-year-old Klitschko in 2017, and the badly flawed WBO champion Joseph Parker in 2018.

With Joshua, Hearn was under the impression that he was sitting on a goldmine in a fighter that he felt would carry the heavyweight division on his back for 10 years. Sadly, it’s not worked out that way, as Joshua’s career is now almost over and it’s Fury who is still plugging along like a dependable plow-horse.

As it turns out, Hearn backed the wrong guy, believing Joshua had the talent to hold onto his titles that he won against weak opposition. Instead of s signing Fury, Hearn stuck it out with Joshua, and that was obviously a massive blunder.

Joshua’s career went belly-up in 2019, and it’s going to likely to be finished in April when he foolishly faces Oleksandr Usyk in their rematch. In contrast, Fury has easy fights ahead of him against potentially Andy Ruiz Jr, Robert Helenius, or Dillian Whyte.

“It’s hard because AJ is a close friend of mine,” Hearn began. “I always wanted them two to fight have AJ be our guy and I could just imagine beating him,” said Hearn to Boxing Social.

“With Tyson, I flew him out to Monaco and he was about 26-stone. He was sweating, and I just thought to myself: ‘You ain’t ever fighting again.’

“If I had known that he would fight Sefer Seferi, someone else, and then Deontay Wilder I would have been all over it.”

Fury has proved he’s the #1 heavyweight

“I have a huge amount of respect for Tyson Fury. People sometimes get it mixed because he’ll say this and I’ll say that, but this is a guy that did what most couldn’t do and I couldn’t do, which is to get himself in a physical position where he was finished done to not just fight him but to go and win the world heavyweight championship [in his rematch with Deontay Wilder in 2020].

“I don’t mind saying it. I respect people that go on to achieve success and greatness,” said Hearn about Fury. “He is on another team, I guess if you can call it that, but he proved me wrong.

“I don’t have regret. But would I have love to have been involved in Fury-Wilder? Of course. It would have been a really awkward situation to try and have both Fury and AJ.

“You can’t say you wouldn’t respect a fighter and a character like Tyson Fury because he’s become a big star,” said Hearn.