Keith Thurman: I’ve been caged up, Feb.5th, the gates open

By Allan Fox: Keith ‘One Time’ Thurman says he views himself as a caged-up gladiator that has been waiting to entertain the fans, and on February 5th, the gates will be open, letting him battle Mario Barrios.

Thurman (29-1, 22 KOs) doesn’t view himself as having been languishing doing nothing for the last couple of years inactive. He feels that he’s been waiting in the same way the ancient Roman gladiators waited in between life & death battles in the colosseum.

The former WBA/WBC welterweight champion Thurman will be fighting for the first time since 2019 when he fights his hand-picked opponent Barrios (26-1, 17 KOs) in the headliner on FOX PPV at the Michelob Ultra Arena, Las Vegas.

Thurman could have fought Abel Ramos, but he chose Barrios because he has a better record, and he’s a former WBA ‘regular’ light welterweight champion.

For Thurman, this is a rare fight for him in which he’s fighting healthy and not dealing with a hand or elbow injury. The time that Thurman has had to rest and recover since his injury, it’s allowed him to get healthy.

Thurman fires back at Bradley

Keith Thurman was a little upset at learning that Tim Bradley said he felt that he was coming back for the money like a mercenary. That’s what a lot of boxing fans think about Thurman.

They believe he sat up there in his place in Florida and spent everything he had. Now he’s coming back to replenish his empty bank account before disappearing for another two to three years.

“I don’t take his words to heart. Mercenary, of course,” said Thurman. “I want to come in and drop bombs, so part of his statement might have some facts to it.

“I may not be a champion, but I’m going to reestablish myself to fight these champions, especially the undefeated champion like Bud Crawford and Errol Spence. I want to be the one that defeats them or puts on the most exciting fights of the year.

“I’m telling you this is what I do. I was one-handed fighting Manny Pacquiao, and it was still one of the most exciting fights of the year. I hear a lot of background noise, but I don’t take it into my heart.

“You think you know Keith Thurman when I got knocked down and got back up when I fought Manny Pacquiao. That still wasn’t the best Keith Thurman. I will not finish my career without performing my best,” Thurman said.

Thurman feels that with the injuries he had for his fight with Manny Pacquiao in 2019, he’s still undefeated in his mind. Unfortunately, the boxing public doesn’t see it that way. They saw the then 31-year-old Thurman losing to a 40-year-old Pacquiao, and it looked terrible.

“In my heart and my soul, I’m still undefeated,” said Thurman. “I might have taken an L, but this champion right here has never suffered defeat. Is there a fighter that can defeat Keith Thurman? I don’t know, but I would like to fight out.

“To a degree,” said Thurman when told that Shawn Porter said that his inactivity has ruined his career. “I know I wasn’t my best against Josesito Lopez. But a lot of that wasn’t the inactivity. It was the left hand.

“So in this camp, I’m able to strength and conditioning and work on all my power punches and angles. Really, I have a different mindset. I lost something. I lost my titles, so I’m striving to get something back. 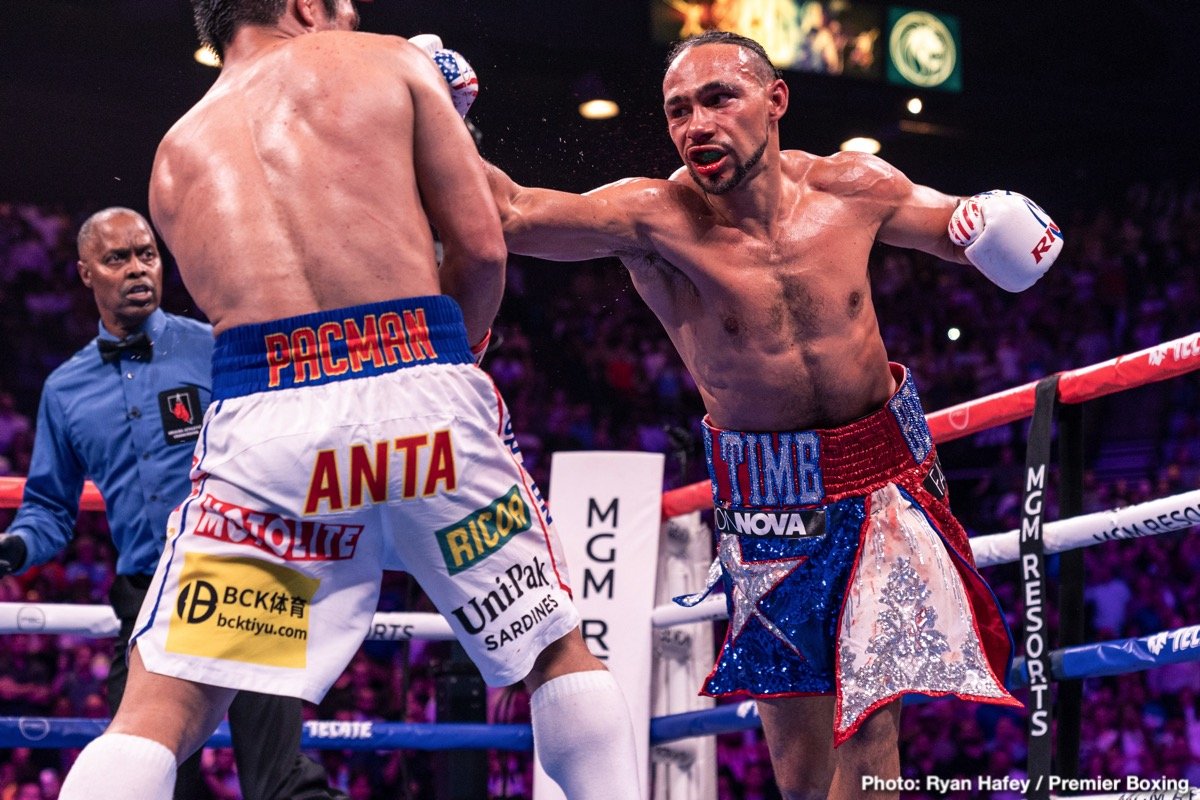 “I believe there’s a lot to show, and I’m fully capable of doing it, and I look forward to reawakening people and getting them excited about the welterweight fights that have a possibility of manifesting this year in 2022,” Thurman said.

Thurman should focus on making it through his fight with Mario Barrios in one piece without ending up on the injured list for the next two years.

It’s pointless for Thurman to call out anyone if he can’t be counted on to fight more than once every two to three years.

‘One Time’ reacts to Gervonta criticism

“It’s easy to say when you’re inactive. You can pull that card,” said Thurman when told that Gervonta Davis said that he’s old and past it. “I’ve been caged up, but that don’t mean I’ve walked away from the game.

“I’ve been caged up. February 5th, the gates open. Thurman is back. Say what you want to say on February 6th.

“That’s definitely a possibility,” said Thurman on whether a fight between him and Terence Crawford is possible in 2022. “I don’t have a belt, and I want a belt in my possession.

“I have to go after those who have the belts. The way it is for me, I want the biggest, most exciting fights. The last time you saw me, I  was Jose Lopez and Manny Pacquiao.

The fight is more than a month away, but ☝🏻⏰ @keithfthurmanjr looks like he could fight TODAY! #ThurmanBarrios pic.twitter.com/kDDx1GzJwi

“I want to see the pros, the cons, and the stipulations and see if this is legitimate. Once when it’s legitimate, I won’t hesitate. I’ll change a few lines, but I don’t hesitate, and I sign on the dotted line.

“I make great fights happen. I’ve done it throughout my whole career, and that’s what I plan on continuously doing in 2022. That’s why Thurman’s back. There’s a lot of great fights that can be made,” said Thurman.

We’ll see if Thurman can come out of his cage to be the fighter he once was on February 5th. You can understand why Gervonta ‘Tank’ Davis slammed Thurman recently by saying he’s old, doesn’t fight anymore, and is irrelevant.

When you stay out of the ring for close to three years at a clip, you’re not going to be seen as relevant. For Thurman, this isn’t the first time he’s done this.

He was out of the ring from July 2017 to January 2019, which was almost two years. After Thurman got in two fights in 2019, he disappeared until February 2022. What does Thurman expect Gervonta to say about him?

Thurman says he’d be willing to fight unbeaten Jaron ‘Boots’ Ennis, but only after he fights all the champions at 147.

Unfortunately, with the probability of Thurman losing to the champions Terence Crawford, Errol Spence Jr., and Yordenis Ugas, the chances of him ever fighting Jaron Ennis are virtually nil.

“You put Thurman in the mix, and I think they’re even better. Let me break this down for people that keep hearing this young man’s name and a lot of things in the future,” said Thurman about Boots Ennis.

“Oh wait, a few months ago by and Floyd is elevated to Super Champ, and they take me from an interim to a regular champion, and I learned pretty much overnight that you’re never going to touch Floyd Mayweather.

“I have no intentions of doing that to Boots Ennis. All the intentions that I have been to fight the champions in my sight.

“From there, I’ll hold onto the belts, and if the young man is still there, still undefeated and wanting to fight, then it’s a possible fight in the future.  I look forward to it,” said Thurman.

We’ll see in the future if Thurman can last long enough to get to a fight with Ennis, but right now, it’s not looking good. I mean, Thurman might not get by Mario Barrios on February 5th and be sent into retirement.


« Canelo Alvarez NOT in negotiations for a fight says Eddy Reynoso