By Jack Tiernan: Vasily Lomachenko says he’d like to take on Gervonta ‘Tank’ Davis if he had it his way, but his promoter Floyd Mayweather Jr. is matching him only against guys they know he can beat on Showtime.

For some reason, Mayweather isn’t putting Tank in against any of the elite fighters at 135, 130, or 140. It’s questionable whether they’ll even go for the easy mark against the newly crowned undisputed lightweight champion George Kambosos Jr, who looks utterly flawed and beatable.

Last Sunday, Gervonta had a close call in almost losing to substitute opponent Isaac ‘Pitbull’ Cruz, who was brought in to replace Rolando ‘Rolly’ Romero. It’s believed that Tank’s next fight will be against Rolly, as long as he’s cleared of the allegations that were recently made against him.

Cruz was seen as a cherry-pick gone bad for Mayweather Promotions, who were likely in shock watching their star almost lose to him.

What was hilarious afterward was Tank rejecting the idea of giving Cruz a rematch to clear up the controversy of his questionable win.

Lomachenko’s best chance for a title shot in 2022 is against undisputed lightweight champion George Kambosos Jr if he’s not dethroned in the first defense of his title early next year.

“I always said I’m open for the fight, but you know boxing politics,” said Lomachenko on Thursday when asked about the possibility of fighting Gervonta Davis.

“Floyd Mayweather said every time, ‘We have our way and forget about us; we’re making money.’ They fight only on Showtime and with guys who they believe they can [defeat],” said Lomachenko.

As Lomachenko says, Floyd Mayweather Jr. wants to focus on his fighters making money fighting each other on Showtime, and he’s selective in who he matched Gervonta against.

The fact that Mayweather hasn’t shown interest in putting a fight together between Tank and Lomachenko all these years tells you that there’s no interest on his part in making that match.

Lomachenko will fight for world titles in 2022

“I am optimistic that, at the end of next year, we will have Loma back fighting for the titles,” Top Rank promoter Bob Arum said about his belief that Lomachenko will be made WBO mandatory to undisputed lightweight champion George Kambosos Jr. with a win over Commey on Saturday night.

“He has big power, and he has reach, experience, so for me, it will be a very interesting fight for fans,” former three-division world champion Lomachenko said to Sky Sports.

“During the fight, you need to be always focusing on your strategy and always focused on your speed and your reaction,” Lomachenko continued.

“Losing is part of boxing, so regardless of how you lose, it’s all about coming back. So whatever happened with the [Teofimo] Lopez fight is what it is, and I took it like a man.

“I knew I needed to come back, and I came back very strong, and that is the reason why Loma chose me, and Saturday, we are going to see what happens.”

“I think he’s a good guy, but we’ll see,” said Lomachenko to Top Rank Boxing about Commey. “He doesn’t look like 90; he looks very good,” said Lomachenko about his promoter Bob Arum. “I wish all of us feeling like him at this age.

“It’s my first face-off where we smile at each other,” said Lomachenko to Commey during their face-off. “A face-off is a serious moment, but now it was fun.”

Top Rank promoter Bob Arum doesn’t know for sure that the World Boxing Organization will make Lomachenko the WBO mandatory for undisputed lightweight champion George Kambosos Jr if he prevails against Richard Commey on Saturday.

Arum only said that he hopes the WBO or WBC will make Lomachenko the mandatory, given that they haven’t installed one in quite a while.

Typically, the sanctioning bodies make it clear before a fight that it will be a title eliminator, and we haven’t heard that for Saturday’s Lomachenko vs. Commey contest.

“We have to do what we have to do, and we do it well,” said Andre Rozier, the trainer for Richard Commey, to Top Rank Boxing on his fight with Vasily Lomachenko on Saturday. “No matter if it’s in the best gym on the planet or in the hotel room, turn the heat up and dance on the carpet.

“We came here to win, and a lot of people are saying that, ‘Richard don’t stand a chance.’ I said, ‘As the underdog, we’ve got nothing to lose.’ Just go in there and shock the world.

“My first time here, it didn’t go my way. It was a bad decision, but it is what it is. In boxing, anything can happen,” said Richard Commey.

“I believe I’ve done all the world that I have to do, and I believe I’m going to put on a good show and may the best man win on the night,” said Commey.

“I know it’s not an easy fight, but I’m coming,” Commey said to Lomachenko.

Commey, 34, will need to raise his game to a higher level than what we’ve seen from him in the recent past because he’s not going to get the job done against Lomachenko fighting like he’s been.

The defeats Commey suffered against Teofimo Lopez, Denis Shafikov, and Robert Easter Jr. showed the level that he’s at.

Commey will have a puncher’s chance against Lomachenko on Saturday night, but that’s about it.

The best chance that Commey has in this fight is if he hits Lomachenko with something big early, making him cautious like he was in his loss to Teofimo Lopez in 2020.

If Lomachenko is afraid to let his hands go for fear of being clipped by Commey, we could see an upset. 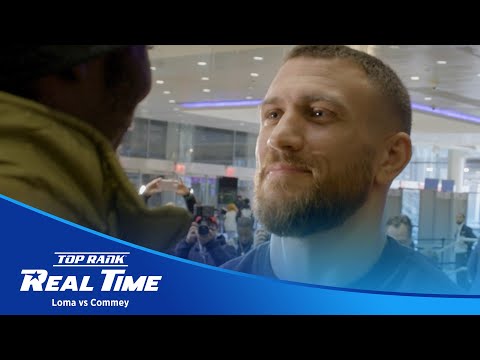 Chris Algieri says Conor Benn has flaws he can capitalize on »