Chris Algieri says Conor Benn has flaws he can capitalize on

By William Lloyd: Chris Algieri says he’s going to take advantage of the holes on Conor Benn’s game that he’s seen while preparing for their fight this Saturday night on December 11th at the M&S Bank Arena in Liverpool England.

The former WBO light welterweight champion Algieri (25-3, 9 KOs) weighed in at 146 pounds on Friday at the weigh-in and looked in great shape with no hint of being weight drained.

This fight is essential for Algieri and Benn because the winner could get a well-paying world title shot.

For the 37-year-old Algieri, it would come at an excellent time for him because this might be his last opportunity to put himself in a position to fight for a world title.

Chris isn’t saying what those holes in Conor Benn’s game are that he plans on capitalizing on, but he’s likely going to use movement and press him at times.

Benn looked incapable of cutting off the ring against Adrian Granados in his last fight in September. His foot speed and ability to predict where Granados was going inside the squared circle were nowhere to be found.

Benn’s father, Nigel Benn, was excellent at cutting off the ring against his mobile opponents, but his son hasn’t been blessed with the same ability.

“I think this is going to be a banger,” said Chris Algieri to Matchroom Boxing on his bout with Benn on Saturday. “For him and his style and his age and where he’s at in his career, I actually see a lot of myself in him when I was younger.

“I used the word, ‘try hard’ earlier in an interview, and I didn’t mean it disrespectfully [to describe Conor Benn]. That’s what you are when you’re younger. You’re going for it. He’s hungry, and he wants a big fight, so here we are.

“Absolutely, and that’s part of the reason why we took this fight. He has holes that we can capitalize on, and we see them, and that’s where the experience is going to play a part,” said Algieri on the flaws he sees in Benn’s game.

“That’s going to be the whole fight,” said Algieri when asked if he’s going to need to be ‘crafty’ to defeat Conor Benn. “I’m going to have to use my bag of tricks.

“I got to dig deep and find those holes that we’re talking about and make it work to the best of my ability and knowledge. 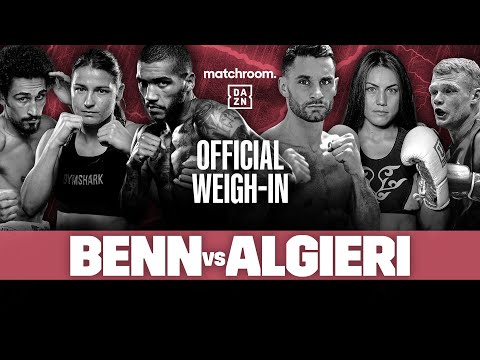 “I think I have a few big fights left in me, and I want to get the biggest fights possible,” said Algieri. “So, this fight, we took this, and it’s a calculated risk because this can catapult me into those big fights.

“I never lost at 140; I’m still undefeated. And I was a world champion, and I left the weight class, and I was told that I wasn’t going to be stripped [by the WBO], and I would be able to go back down and defend it, which didn’t happen obviously. I was stripped in fighting Pacquiao [in 2014].

“So I still have unfinished business at 140. 1000%,” said Algieri when asked if he’s motivated to return to 140 due to him having never lost in that weight class. “I never lost my title, and I still feel like a world champion,” said Algieri.

Fighting Conor Benn is a big fight for Algieri, but he’s likely looking at the money he can make challenging champions Errol Spence Jr. or Terence Crawford.

Defeating Benn might not be a significant victory for Algieri to be given a title shot against Spence or Crawford unless he spectacularly beats the 24-year-old Benn.

Algieri believes that a victory over the undefeated Benn will open the doors for other big fights at 140 and 147. He says he wants to fight for a world title again, and obviously, there would be money to be made against one of the following champions:

“I think a big win here propels us into big fights at 147 or 140. I’m open to either opportunity,” said Algieri. “Of course, a win is a win, but if it happens in spectacular fashion, great. It’s all about getting the win.

“This is something I’ve wanted to do in my career and to be here now, it’s another check in the box,” said Algieri on fighting in the UK. “The fans here are great. They understand boxing.

“So, I think getting that exposure in the new market is really big for me. I’m used to that in so many ways, but not so much in someone’s backyard,” said Algieri on fighting in the lion’s den on Saturday night at the Echo Arena in Liverpool.

“The perception and the narrative that is being told before the show, the script that is being written, but I’ve never taken heat on that.

“I built up a lot of momentum in the Tommy Coyle fight on the undercard of Joshua and Ruiz. I had three fights that year [2019], and then through circumstance, I got pushed back a little, and then the pandemic hit.

So six months turned into two years. It’s good to be back and being active. Getting two fights in this year is fantastic,” said Algieri.

Even if Algieri doesn’t get a title shot against one of the champions after a victory over Benn on Saturday, a well-paying rematch against him is possible.

A rematch with Amir Khan or a fight with Kell Brook might float Algieri’s win, and that would be interesting for fans and would likely pay well.

Matchroom Boxing wouldn’t let Algieri walk away from a win over Benn without taking a stab at setting up a rematch. Benn is too popular for him not to avenge a loss, and it would look bad if Algieri were allowed to walk away with a victory without an effort being made to run it back.