By Charles Brun: Conor Benn is looking past his next opponent Chris Algieri for this Saturday and vowing to give Adrien Broner a “beating” when the two meet in early 2022.

It’s difficult for the average fan to understand what Benn gets from beating Broner right now because he’s already been soundly beaten four times.

Broner = too advanced for Conor Benn

I hate to say it but I think Broner has a VERY good chance of beating Benn. Even though Broner is well past it, he’s highly skilled and has the ability that we’ve never seen from Benn. Conor can punch a little like his dad Nigel Benn, but he’s not technically gifted like Broner and never will be.

By the time Broner was 24, he already had his technical skills in place and was rolling over everybody he faced.

The fans would prefer to see Conor fighting these types of fighters:

The real question is, why are Conor Benn’s promoters at Matchroom Boxing setting such a low bar for what they feel are worthy opponents for him?

Hearn was banging on this week about how Benn is Britain’s next big superstar, which if that’s the case, why is he fighting Broner?

Conor is like a kid that can’t wait to open his Christmas presents, and he seems excited about the prospects of fighting the former four-division world champion Broner, even though it’s

Broner used to be a star, but he’s now viewed as an over-the-hill fighter in the eyes of many boxing fans in the U.S.  The once superstar Broner has been declining since his loss to Marcos Maidana in 2013.

Benn is saying he’ll give Adrien Broner a beating

“Algieri is my main focus and my main priority, but I’d fight Adrien Broner and give him a beating no problem,” said Conor Benn to iFL TV. “Big fights are there. I like Broner; I’m a big fan of Broner’s fighting style.

“I’m not a massive fan of his attitude and how he conducts, but that’s how he wants to carry on, and it’s up to him. It’s not my cup of tea, but it doesn’t have to be my cup of tea. Everyone is entitled to their own opinion.

“Obviously, you’ve got Amir Khan and Kell Brook as well. There are loads of big fights but listen, Algieri is my world title fight because if I do not win, it sets you back.

“All these fights are my world title fights. They’re getting me close. I’m touching, I’m top five,” said Benn in putting himself in the top 5 at 147. “We’re touching world titles. So getting Algieri out of the way, and we’ll push on from there.

“I’m not feeling any pressure, to be honest,” boasts Benn. “I’m going to go in there, and I know what I’m going to do.” 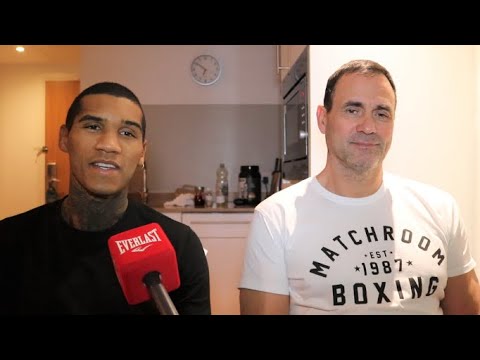