The Hamburg Universum boxing stable and its cooperation partner Probellum are organizing the first joint fight night on November 20th.

The main fight will be held by Universum’s Cuban heavyweight Jose Larduet, who will defend his WBC Latino title. “Jose has all the qualities to keep up with the elite. We are pretty sure that he will box on the big stage in 2022,” said promoter Ismail Özen-Otto. 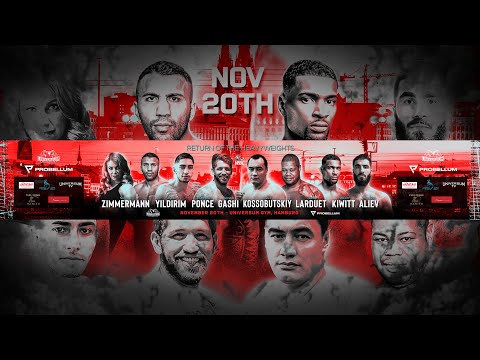 In addition, Senad Gashi, who will compete in the new Bridgerweight (up to 101.6 kg) weight class for the first time, and middleweight Avni Yildirim, will both enter the ring. Promoter Özen-Otto has also announced a surprise, as with financial support from media and boxing company Probellum, a top international boxer will be fighting in Hamburg.

The partnership will see Probellum and Universum putting on events together throughout Germany, providing boxing fans in the region with high-quality, elite-level boxing on a regular basis.

Universum is one of the largest and most successful boxing stable in Europe, having produced nearly 50 world champions since it was formed back in 1984, giving it close to 40 years of proud heritage.

They have worked with some of the biggest names in the sport, including the Klitschko brothers, and have had major broadcast deals around the world, most notably with ZDF in Germany.

After a brief hiatus beginning in 2012, Universum returned with a bang in 2019 and saw new life breathed into the promotion, with the emphasis being on unearthing young talent and making them the stars of the future.

Some of the very best undefeated boxers are currently working with the promotion, including Olympic bronze medallist Artem Harutyunyan, and hard-hitting heavyweight Zhan Kossobutskiy.

Universum has set out plans to create new standards in boxing and break new ground, as they look to bring a new golden age to German boxing. They are happy to work together with the competition, making them the perfect fit for Probellum’s vision.

Probellum’s innovative strategy has seen them create partnerships with promoters around the world, as they look to provide support for grassroots boxing on a global level, whilst growing a digital platform which will serve millions of fans.

To date, Probellum has already announced co-promotional deals with major boxing companies such as LNK Boxing in Latvia, Team Ellis Boxing in Australia and Box Office Sports in Ghana, with even more to come in the near future.

“I am very happy about this partnership with Probellum and Universum,” said Ismail Ozen-Otto of Universum. I am also happy that we were able to capture the attention of Probellum due to the good work that we have done over the past two years.

“My team and myself appreciate this a lot, and we are certain that together with Probellum we will grow even stronger. We are looking to the future with confidence.”

“We are thrilled to secure our latest co-promotional agreement by teaming up with Universum,” said Richard Schaefer, President of Probellum. “Universum is a promotion with decades of experience and history, and we’re very happy to be working with them.

“It is clear from their plans that they possess the same ambitions and goals as Probellum, and it means that German boxing fans are going to be treated to some massive boxing events over the coming years.”