Below is what the fighters and their representatives had to say:

“I’ve been preparing for this fight for a while now, I’m so thankful that the fight finally came, and I just can’t wait to show JoJo Diaz that he can be a dog, but at the end of the day skills pay the bills. If that’s his only approach that he’s going to dog me, come on I’ve been seeing that my whole career, if that’s his Plan A and I’m going to let him dog me, it’s going to be a long night.”

“At the end of the day, I don’t think it’s any real doubt with these guys with me, none of them are in a rush to fight me. JoJo Diaz wasn’t in a rush to fight me, I feel like we had to corner him to make him take the fight, all these other guys it’s the same thing. They know my skills set, how much I bring to the table, if JoJo didn’t take this fight the world would have known what it really was. Come December 4, they’re going to see.”

“I can’t overlook JoJo Diaz, I know he’s going to come to fight, he’s telling us that he’s coming in there to try and dog me out. I don’t want to make it through this press conference without telling him thank you for taking this fight, thank you for stepping up because most of these guys wouldn’t.”

“I just can’t wait. This is going to be a great fight, JoJo Diaz is a dog, he’s proven that, and I do feel like he is in the prime of his career. It won’t take anything away from my victory when I win.”

“I’ve been seeing guys come at me and try to do everything they can to win for ever now. I’ve always been a slick boxer and had skills, I’ve seen it over and over, time and time again. I do feel like his style will be tailor made for me, there’s nothing that he can do to win. He can’t outbox me, I’ll show him he can’t out bang me, I have the size advantage, all the tools to win.”

“This is going to be a tremendous night and an action-packed fight, I know Devin Haney is a really skilled elusive fighter, but I’m a dog. I’m the type of person that has already been in there and dealt with that experience and adversity. I know what it is to kill or be killed.”

“I feel like I’m at my prime, I feel like I’ve already took all the steps I needed to take to be at this point in my life and my career. As far as taking fights with Jesús Rojas, Tevin Farmer, Gary Russell Jr., Javier Fortuna, I’ve already fought those top tier contenders.”

“I feel like Devin Haney is a young fighter, a hungry fighter, he has a lot of experience and ego to go out and put on tough challenges. I feel like he doesn’t have the experience I have, and I feel that’s going to be the key factor to my victory come December 4.”

“When I say out dog, it’s not just throwing punches and stuff like that, I’ve got all the skills and resume in the back of my mind and career. I’m a 2021 Olympian, I’ve fought all these tough fighters already, I’m not just going to throw punches to throw them. I’m going to break his ass down.”

“I know that Devin is a very skilled fighter and it’s going to be tough fight, he’s going to bring out the best in me and I’m going to bring out the best in him. At the end of the day, I know what I’m about and that there’s a lot at stake for me. I’ve been through everything already, all the trials and tribulations in my life and career, but now I’ve got my son and my family that brings me that extra motivation to go out there and risk it all in that ring.”

“I believe that this fight, not only for Devin, is the right fight, but it’s the right next fight for JoJo. Me and JoJo got the chance to talk and he’s a man of his word, things got a bit shaky, and we got a bit worried but all in all, the fight is happening.”

“I think we have to have to count Devin for all that experience he did get in that fight against Jorge Linares, a tremendous fighter. Come December 4th, we have JoJo Diaz, just another step in the legacy of one of the best fighters in the world – Devin Haney.”

“Ironically Devin is the champion, but in this situation he’s the one who is hunting, he’s been hunting for JoJo Diaz. We were under the assumption that when Diaz fought against Javier Fortuna that he was going to be Devin’s mandatory, so we’ve been preparing for him. We’re not underprepared by any means, four weeks we’ve been preparing since he’s become the mandatory.”

“For JoJo Diaz this is not anything new, you guys know how he’s come up, his whole career has been tough. His whole he’s been raising his hand and saying I will fight anybody. Here’s proof, we’re here today to announce this great fight, but it takes two.”

“Here’s a young man with a lot of talent willing to step into the ring with anybody. It is a real fight, it’s an even fight, Devin reminds me a lot of a fighter from the past – Prince Naseem. A flashy, badass fighter.”

“JoJo reminds me a lot of a little Mexican fighter named Marco Antonio Barrera. And what did he do at the MGM Grand? Well you will see on December 4.”

“Jorge Linares put on a great performance, Devin congratulations, you did surprise me because you showed a lot of experience in the fight even though you hadn’t been in that type of fight. Devin needed that type of fight to get him to another level.”

“The difference between Linares and JoJo is about ten years difference, there’s a big age difference and in activity. JoJo has been active where Jorge hasn’t, so JoJo come round one will get started, not round eight.”

“This marks an incredible run live on DAZN, ten events in the next seven weeks in six different countries. We’re here today to talk about this tremendous fight, I thought we wouldn’t get there, plenty of talk on social media. I’m delighted that these two fighters have put pen to paper for an incredible fight here in Las Vegas. We’re expecting a full up MGM Grand for a great fight on December 4.”

“Devin Haney, JoJo Diaz, December 4, MGM Grand, live on DAZN – a tremendous fight night. Make sure you tune in, or join us live from the arena, I believe this fight will be completely sold out for a tremendous world lightweight championship as part of an unbelievable run it to close out the year.” 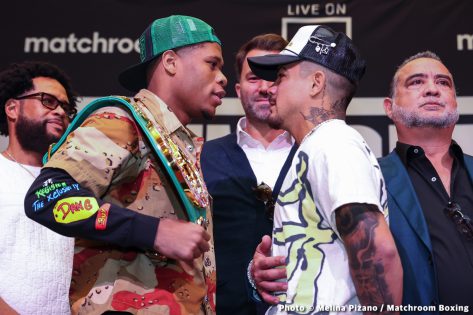 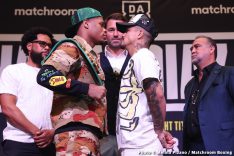 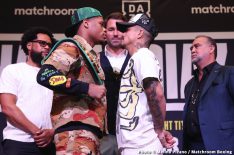 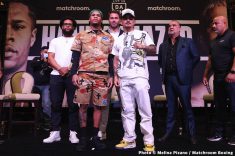 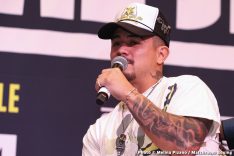 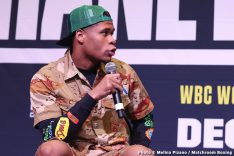 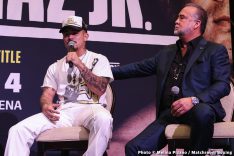 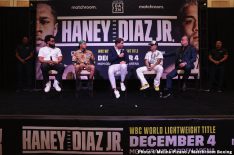 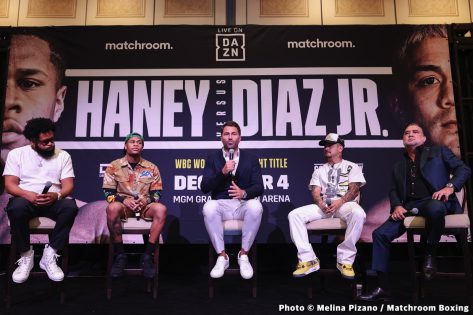