By Dan Ambrose: Trainer & manager Eddy Reynoso says he will begin negotiations between his fighter Canelo Alvarez and Gennadiy Golovkin for a trilogy fight if GGG successfully defeats Ryota Murata on December 29th.

Reynoso wants the Canelo-Golovkin trilogy match to take place in Mexico, and he’s going to see if that’s possible.

Golovkin, DAZN, and the boxing world have been pushing for a trilogy match since GGG lost a questionable 12 round majority decision to Canelo in September 2018.

Rather than giving the fans and DAZN what they want in a third Golovkin encounter, Canelo has chosen to do his own thing, opting to unify the super middleweight division and capture a belt at 175.

None of Canelo’s fights in the last three years have matched the interest the boxing public had in his two contests with Golovkin.

With Golovkin about to turn 40 in April, Canelo no longer has time to delay the trilogy match.

If Canelo waits until Golovkin is 41 or 42, he won’t get credit from fans if he beats him. Many will say he intentionally aged him before finally agreeing to the trilogy.

“We would have to see,” said Eddy Reynoso when asked if Canelo will drop back down to super middleweight after he fights at cruiserweight. “We’re going to move up and down, and that’s one of the advantages a disciplined fighter has.

“Hopefully, the Golovkin trilogy fight will present itself. We’re going to see what he says. He fights at the end of the year [against Ryota Murata], and he fights in December against Murata.

Golovkin has a tough fight on his hands against Murata, and you can’t rule out an upset in that match-up. But if Golovkin wins, we’ll see if Reynoso is serious about wanting to begin talks for a third fight.

“After Mayweather beat Canelo, he said, ‘I’m leaving boxing. You’re the next one up,’ and it’s been like he said,” said Reynoso about Mayweather saying that Canelo would take over boxing after he retired.

“Mayweather has supported him as well and has expressed himself well over Canelo. Of course, Canelo has matured, and his boxing has gotten better; he has fought important fights. Therefore, I don’t think Mayweather is wrong,” said Reynoso.

“A strong fighter that can fight in any category from super middleweight to light heavyweight. 175 and 168, we got knockouts, and we’ve gone to 160 and 154. We are ready,” said Reynoso.

It’s good that Mayweather has praised Canelo in the past, but he shouldn’t let that go to his head.

Mayweather is a good fighter and all, but Jose Luis Castillo arguably beat him in their first fight, and many boxing fans felt that Marcos Maidana deserved a win in their first encounter.

During the later part of Mayweather’s career, he waited six years before finally fighting Manny Pacquiao, opting to wait until he was older before facing him.

Mayweather didn’t fight Keith Thurman, and that was seen as him swerving the former WBA/WBC welterweight champion.

“Canelo supports all the decisions we make,” said Reynoso. “We all make decisions as a team. He knows who [Ilunga] Makabu is, and he knows he has all the tools to beat him.

“He’s a strong fighter that moves forward, that can hang, that has a good punch, but we’re going to win,” Reynoso said of Canelo’s next opponent, 34-year-old Makabu.

“We had thoughts of moving to cruiserweight for two years or so. We’ve been sparring with world class heavyweights like Frank Sanchez. Honestly, Canelo is very strong, and we know we’re going to give a good fight.

“We’re going to see if we can go directly to Makabu to negotiate a deal,” said Reynoso. “No, no, no, that’s it,” Reynoso said when asked if Canelo would consider moving up to heavyweight.

“What I want for Canelo is to keep growing. I want him to be the best and look for challenges. We know he’s up for any challenge we present to him.

“He’s disciplined, strong, intelligent in the ring. Therefore, I have a lot of faith that we will win that fight, and that’s why we’re asking for that fight.

“Approximately, we will train for four months for Makabu. Canelo is going to start training once Christmas is over. Canelo is lifting weights as well as shadow boxing and saying active,” said Reynoso.

Canelo will likely be slower after he bulks up to fight WBC cruiserweight champion Ilunga Makabu in early 2022. If Makabu can put his hands on Canelo, he could hurt him and possibly score a knockout.

It’s a mistake for Canelo to pick Makabu rather than one of the highly respected cruiserweights like Mairis Briedis or Lawrence Okolie.

At least if Canelo gets beaten by one of those guys, he won’t be criticized nearly as much as he will if he loses to Makabu, who is viewed as the weakest of the champions at cruiserweight. 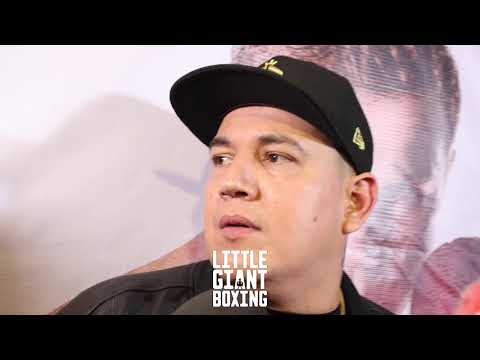