Amir Khan vs. Kell Brook on Feb.19th in Manchester, England

By Charles Brun: Amir Khan vs. Kell Brook is now officially a done deal for February 19th on  Sky Sports Box Office at the Manchester Arena in Manchester, England.

It’s unclear what weight limit the fight will be contested, but it probably doesn’t matter too much. Both guys are so past it that the weight is irrelevant for this type of fight.

Khan will likely have the speed advantage and Brook the edge in punching power and size. However, both of these guys are so past it that it’s difficult to predict how the fight will play out.

If Brook lands something significant in the first three rounds, he’ll likely score a knockout because Khan has never had much of a chin.

For U.S boxing fans, Khan is arguably known more for his knockout losses than his wins. The following fighters have knocked out Khan during his career:

The Khan-Brook fight is a little late to be taking place at this point in the careers of the two aging Brits, but as the saying goes, ‘Better late than never.’

Khan-Brook would have made more sense a decade ago in 2011 when the two were still in the primes of their careers, but there was no interest back then on Khan’s part.

It’s unfortunate because a fight between him and Brook likely would have made a lot more money than it will now.

“Amir Khan against Kell Brook is here at last and it’s going to be an unforgettable night when these two huge names in British boxing finally settle their long-running rivalry,” said Adam Smith of Sky Sports.

“Khan and Brook have been asked about this fight for a decade, despite their success as world champion, and now we will get the answer in February.

“Sky Sports has covered some of the biggest fights of both Khan and Brook’s careers, but this one is special. This is a heated feud that has simmered for years and there’s so much pride at stake. It’s a real 50-50 fight and we will find out in February who takes it!”

Neither fighter is relevant in their respective weight classes at 147 and 154, but the fight makes sense when viewed as a celebrity or Old Timer’s type of affair.

When you look at some PPV fights that are being sold to the public, such as Jake Paul vs. Tommy Fury and Floyd Mayweather Jr. vs. Logan paul, Khan-Brook doesn’t seem too bad in comparison.

Brook is no stranger to being knocked out, having been stopped by Gennadiy Golovkin and Errol Spence Jr. in back-to-back fights in 2016 and 2017. Interestingly, in both of those contests, Brook suffered eye injuries.

Brook (39-3, 27 KOs) will be coming off a 15-month layoff since he was knocked out in the fourth round by WBO welterweight champion Terence Crawford on November 14th, 2020. 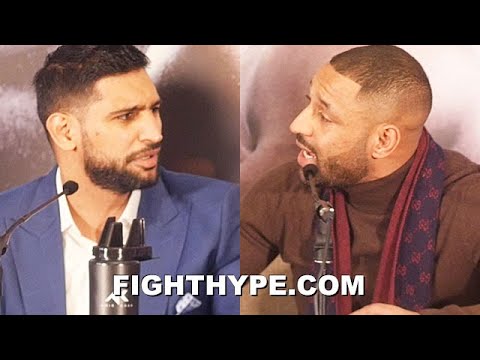 In that fight, Brook looked surprisingly good for the first three rounds before Crawford stopped him in the fourth.

Some would argue that Brook would have put in a better performance if the fight had it been held at 154, as he had to drain down from that weight to face Crawford at 147 for his WBO title.

The soon-to-be 35-year-old Khan (34-5, 21 KOs) will be coming off a nearly three-year layoff when he enters the ring to face Brook in their grudge match on February 19th.

The last time Khan saw action was in July 2019 when he defeated super featherweight Billy Dib by a fourth round knockout in Jeddah, Saudi Arabia. Khan had a considerable size advantage over the 130-pounder Dib, which played a factor in his easy victory.

The last serious fight against a relevant fighter was in April 2019, when he was stopped in the sixth round by WBO welterweight champion Terence Crawford. That was an odd fight, which was surprisingly shown on ESPN PPV.

Khan’s trainer Virgil Hunter pulled him out in the sixth round after he was hit by a low blow. Rather than letting Khan recover from the low blow, Hunter stopped the fight.