By Dan Ambrose: Roy Jones Jr. says Deontay Wilder will need to land one of his big shots on Saturday night for him to have a chance of beating WBC heavyweight champion Tyson Fury.

Jones says that Wilder could only salvage a draw against Fury in their first fight means that he was getting outboxed in the other rounds.

Wilder, now working with new trainer Malik Scott, doesn’t impress Jones Jr. enough to give him a chance of beating Fury by a decision.

Fury and Wilder will be fighting in the headliner on PPV this Saturday night, October 9th, at the T-Mobile Arena in Las Vegas.

Wilder can win if he lands that shot

“If he can land that shot, he’s always got a chance,” said Roy Jones Jr. to Fighthype on Deontay Wilder’s chances of beating Fury. “They don’t call him ‘Bombsquad’ for no reason. He earned that reputation with that name. If he can land that punch, he can change anything.

“He knows in the back of his mind, he can put Fury down with that punch,” Jones continued. “He’s not looking at it like, ‘I’m going to go out and outbox him.’ No, he’s thinking, ‘I’m going to put him down, and hopefully, he’ll stay down.’

“If not for those two knockdowns [in the first fight Fury vs. Wilder fight in 2018], he would have lost two times,” said Jones about Wilder.

In other words, Roy is giving Wilder only a puncher’s chance of beating Fury. That’s what it was in their first two fights, so nothing changes in that area.

We don’t know how well Wilder and Fury will look with both of them coming off a 20-month layoff, and that’s two years out of the ring.

We recently saw how badly eroded Manny Pacquiao’s skills were when he returned from a two-year layoff to challenge WBA welterweight champion Yordenis Ugas for his title last August.

Unlike Fury, Pacquiao didn’t pack on a lot of fat during his two years out of the ring, and Fury may have lost a lot from his game due to his inactivity.

You can’t say the inactivity will hurt Wilder as much because his entire game has always been based on his power, and that’s not going anywhere.

“He’s taking another chance. That outcome will tell you whether he did it right,” said Evander Holyfield to Fighthype in discussing Wilder.

“It’s going to be difficult, but there are some things I heard that I’m kind of like, ‘Oh, you might be right.’ I never seen Deontay fight a fight as bad as that last fight [with Fury]. Something was wrong,” said Holyfield.

“I think it can be different. You can always make adjustments. There are a lot of adjustments that he could have made, and he has to make some adjustments,” said trainer Ronnie Shields about Deontay Wilder.

“Fury put his weight on him, he came in 20 lbs heavier than the last time, and he did a lot of dirty stuff to Deontay.

“Pushing him in the face, hitting him behind the head [aka rabbit punching], head-locking him. He was doing all kinds of stuff that Deontay didn’t prepare for,” said Shields.

Thanks to the referee, who was missing in action for the Fury-Wilder rematch last year, Fury got away with a lot of fouling.

The rabbit punching that Shields mentioned had the most significant impact on Fury winning the fight. Is that cheating? I guess so. When you’re allowed to foul, that’s cheating, and Fury got away with it. 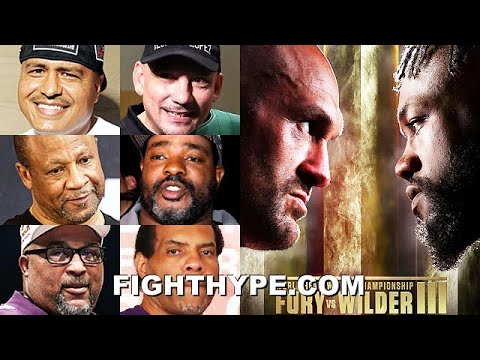 
« Oleksandr Usyk vows to be “better” in rematch with Anthony Joshua