By Charles Brun: Otto Wallin believes Oleksandr Usyk can give the much bigger 6’9″ Tyson Fury problems with his skills and movement. Usyk, a small heavyweight, is in the position to wipe out Anthony Joshua and Fury next year and wreck things for UK boxing fans.

They’ve been pining away for a match between Joshua and Fury for the last seven years, and Usyk could spoil it for the fans by beating both of these huge heavyweights in 2022.

Wallin expects IBF/WBA/WBO champion Usyk (19-0, 13 KOs) to defeat Anthony Joshua in their rematch in early 2022, which will set up an undisputed clash with WBC champion Fury.

Wallin thinks Fury (31-0-1, 22 KOs) might have too much size for the undefeated former undisputed cruiserweight champion to deal with. He doesn’t know if the 277-lb Fury will handle Usyk’s speed and precision punching.

Fury still has a hurdle that he needs to get past in the form of Dillian Whyte before meeting up with the winner of the Joshua vs. Usyk 2 rematch next year.

Whyte recently pulled out of his October 30th fight with Wallin, complaining of a shoulder injury.

Although Fury’s promoter Bob Arum insists that Whyte isn’t the WBC mandatory for Tyson, it appears that he is. Arum says Whyte MUST fight Wallin, but it doesn’t look like he’s doing to do that.

Whyte wants the money fight against Fury, and you can’t blame him. Wallin is big enough and tough enough to defeat Whyte, especially how he’s been looking in the last two years.

“I thought he was going to win, but I thought it was going to be a good fight,” said Otto Wallin to FightHub TV on the Joshua vs. Usyk fight on September 25th.

“Usyk was a good cruiserweight, but he hadn’t looked that good at heavyweight against [Chazz] Witherspoon and Chisora. But he did a really good job.

“He really neutralized Joshua and made Joshua fight his way of fighting, which is boxing and showing great skills.

“Joshua couldn’t really match that. If Joshua is going to win the rematch, he’s got to be really physical with him, and look what Chisora did.

“That was working pretty good. Honestly, he did better than Joshua did. I wouldn’t say I think he’s [Joshua] going to win it [the rematch with Usyk]. It was kind of one-sided.

“Joshua won some rounds, yes, but it was a clear victory for Usyk. If Joshua has to dig down and step out of his comfort zone, then he can win because he’s a big strong guy. He’s got to use that,” said Wallin.

It’s an insane move on Joshua and his promoter Eddie Hearn’s part in taking the immediate rematch with Usyk. But it shows a sense of overconfidence on their part and not recognizing that history could repeat itself.

If Joshua loses the rematch with Usyk, Hearn will need to rebuild him somehow.

Hopefully, Hearn is more assertive with Joshua and doesn’t bow down to his whims because his risk-taking tendencies will wreck his career.

Usyk can give Fury problems

“Problems, yeah, but can he beat him? I’m not sure,” said Wallin when asked if Usyk gives Tyson Fury problems.

“I just feel like Fury is going to be too big for him. That’s really the question. Can he [Usyk] get past that? I’m not sure.

“He’s a masterful boxer, but it’s going to take something really special to beat Fury.

“He knows how to do that. Watch him with Chisora and those guys,” Wallin said about Fury knowing how to use his size to beat smaller fighters by jabbing them. “Usyk is different, but it’ll be tough for Usyk to beat Fury, that’s for sure.

As big as Fury has gotten lately, Usyk has a genuine chance of beating him because he’s slower now, and his mobility is nowhere near what it used to be when he was trim.

Joshua is “scared” of being countered

“It’s going to be very interesting to see what happens there, but I would favor Usyk,” said Wallin in favoring Usyk to beat Joshua. “It’s hard sometimes when you’re getting countered every time you throw something.

“That can really mess up your mind, and that’s what happened,” said Wallin on why Joshua didn’t throw more body shots and attack Usyk more.

“He [Joshua]  didn’t use his power and his strength, and he was scared to sit down on his shots.

“I think he was scared of getting countered. Yeah, I think so,” said Wallin when told that Usyk is developing respectable power and is growing into the heavyweight division.

“He’s [Usyk] a fighter that has precision timing and speed and that gives a lot of power too. Like I said, when you get counterpunched like that, it’s not that fun.

“So it makes you think for sure,” Wallin said about Usyk’s ability to counter punch Joshua and make him reluctant to throw back.

It did look like Joshua was utterly terrified of throwing punches due to Usyk’s ability to counter him.

Joshua did have some short-term success in throwing to the body of Usyk, but he stopped targeting his midsection after the Ukrainian tagged him with some hard counters. When Joshua was going to the body, he was vulnerable to getting nailed by Usyk.

“I think Joshua at this point, he’s been with McCracken for a long time, and McCracken is a good trainer,”  said Wallin when asked about Joshua potentially getting a new trainer.

“If I were Joshua, I would keep him. My sense if McCracken is a very good trainer.

“Maybe bring in Ronnie Shields, or I’ve seen him go around to different trainers, but he needs someone that will push him out of his comfort zone.

“If I were him, I’d bring in an assistant trainer with McCracken because they’ve been together for so long now, and he can’t just give that up after that.

“Bring somebody in, and hopefully, they can help you get out of your comfort zone and be more aggressive,” said Wallin on what Joshua needs to improve.

With the changes that Joshua wants to make with his style for the Usyk rematch, McCracken is more than capable of working with him on that.

Joshua doesn’t need s new trainer for him to be more aggressive against Usyk because he already knows how to fight like that from earlier in his career.

If Joshua needs a sports doctor to help his self-confidence, that’s something else.

As far as the changes Joshua needs to make for him to have a better chance of winning the rematch with Usyk, McCracken is all he needs to help him. This isn’t rocket science. Joshua needs to go on the attack mode and stop worrying about getting hit back. 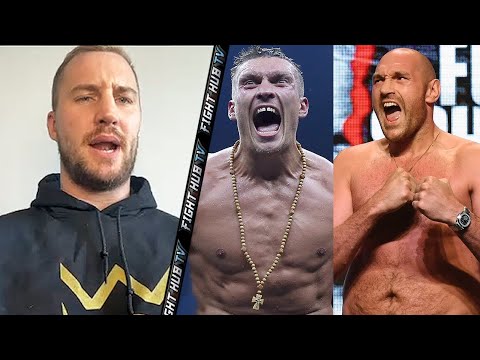