‘This is the end of Deontay Wilder’ predicts Tyson Fury

By William Lloyd: Tyson Fury says he’ll be defending Deontay Wilder into retirement Saturday night when he gives him a bad “hiding” in the third and final fight of their rivalry.

Fury, 33, plans on moving on after he beats Wilder to face the rematch winner between IBF/WBA/WBO champion Oleksandr Usyk and Anthony Joshua in 2022.

There’s a lot of money for Fury to make next year after the smoke clears from the Usyk-Joshua rematch, and he plans on scooping up the dough to be crowned the #1 heavyweight on the planet.

Although Fury rates himself as the top guy in the division,  it would be proven once he beats the winner of the Usyk vs. Joshua 2 fight.

“It’s just a boxing match, and I’m very confident I can win the fight,” said Tyson Fury to Boxing Social ahead of his trilogy with Wilder on Saturday. “Nope,  I think I’ll get him out of there,” Fury said when asked if he sees the fight going the distance.

“Definitely not,” Fury said when asked if he believes he’ll ever cross paths with Deontay again. “I’ll give him that bad of a hiding to where he’ll never want to see me again.

“I think I’ve never left his head since that round seven when he got knocked out, and I’ve been haunting him ever since.

“It’s been 20 months, and I assume it’s been a long-drawn-out process for him.  The fact that he’s a loser now has probably sunk in, and he’s admitted it to himself,” Fury said.

It won’t be surprising if Fury and Wilder face each other again in the future. With Wilder’s punching power, he’s going to be around for a while, perhaps even longer than Fury.

If Wilder can knock off some of the top names, Fury will need to deal with him again, as long as Tyson doesn’t hang up his gloves after making a massive amount of money in 2022.

Retirement for Fury is always a possibility because he will make a ton of money next year if he defeats Wilder on Saturday.

Beating Deontay will be easier this time

“Defeating him for the third time will be a lot easier than when he was unbeaten,” said Fury in believing he’s going to defeat Deontay on Saturday easily.

“I don’t need credit from Deontay Wilder. I just need him to turn up on Saturday night and bring his A-game, and that’s it,” said Fury.

It might not be as easy as Fury thinks for him to win the trilogy on Saturday night; seeing that Wilder’s back is against the wall, he’s angry, and he’ll be throwing punches with more conviction than in the first two contests.

You’ve got to assume that the first six rounds will be highly explosive with Wilder taking advantage of his hand speed and power advantage to land some big shots on Fury’s chin.

As long as Fury can take Wilder’s best shots in the first half of the fight, he’s got a great chance of wearing him down in the second part to get the stoppage.

Fury’s trainer SugarHill Steward says he’s going to be weighing in the 290s on Saturday, but he doesn’t look like he’s anywhere close to that weight.

The ‘Gypsy King’ Fury appears to be thinner than the 273 lbs he weighed last year when he defeated Wilder by a seventh round knockout.

Fury and SugarHill appear to believe that he must be at least 270  lbs to have a good chance of winning the trilogy.

That might be the reason why the fight was postponed from the earlier July 24th date rather than the COVID-19 excuse that Fury gave to move the battle to October  9th.

At the time of the postponement, Fury looked thin in the 250s and not the same bulked out 273-lb fighter that had beaten Wilder in 2020. 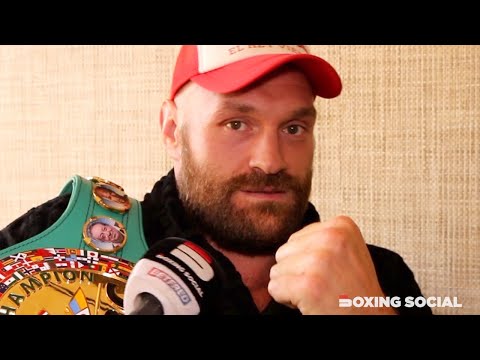