Mikey Garcia returns to the ring against Sandor Martin

By Sean Jones: Mikey Garcia wants to take care of the upset-minded Spanish fighter Sandor Martin this Saturday night, October 16th, on DAZN from the Chukchansi Park in Fresno, CA.

The fight will be at a 145-lb catchweight, which means Martin will need to come up in weight from 140 to face Mikey.

Sandor (38-2, 13 KOs) has mainly fought lower-level opposition in his native Spain during his career. Interestingly, he’s been chosen for Mikey to fight in the main event on DAZN instead of someone more fitting for that status.

This is Mikey’s first appearance in 20 months since February of last year. He said he wanted to fight former WBA 140-lb champion Regis Prograis, but there wasn’t enough time to promote the fight.

So instead, Mikey will be facing Sandor Martin, a fighter with a nine-fight winning streak since getting soundly beaten by fringe contender Anthony Yigit in 2017.

Mikey had hoped to face Manny Pacquiao in his final fight, but the Filipino star chose to face WBA welterweight champion Yordenis Ugas instead. If Mikey had been active with his career in the last year and a half, he probably would have gotten the fight with Pacquiao.

Had Pacquiao taken the fight with Mikey, he would have been criticized for facing a guy that has become a part-time boxer at this stage in his career. 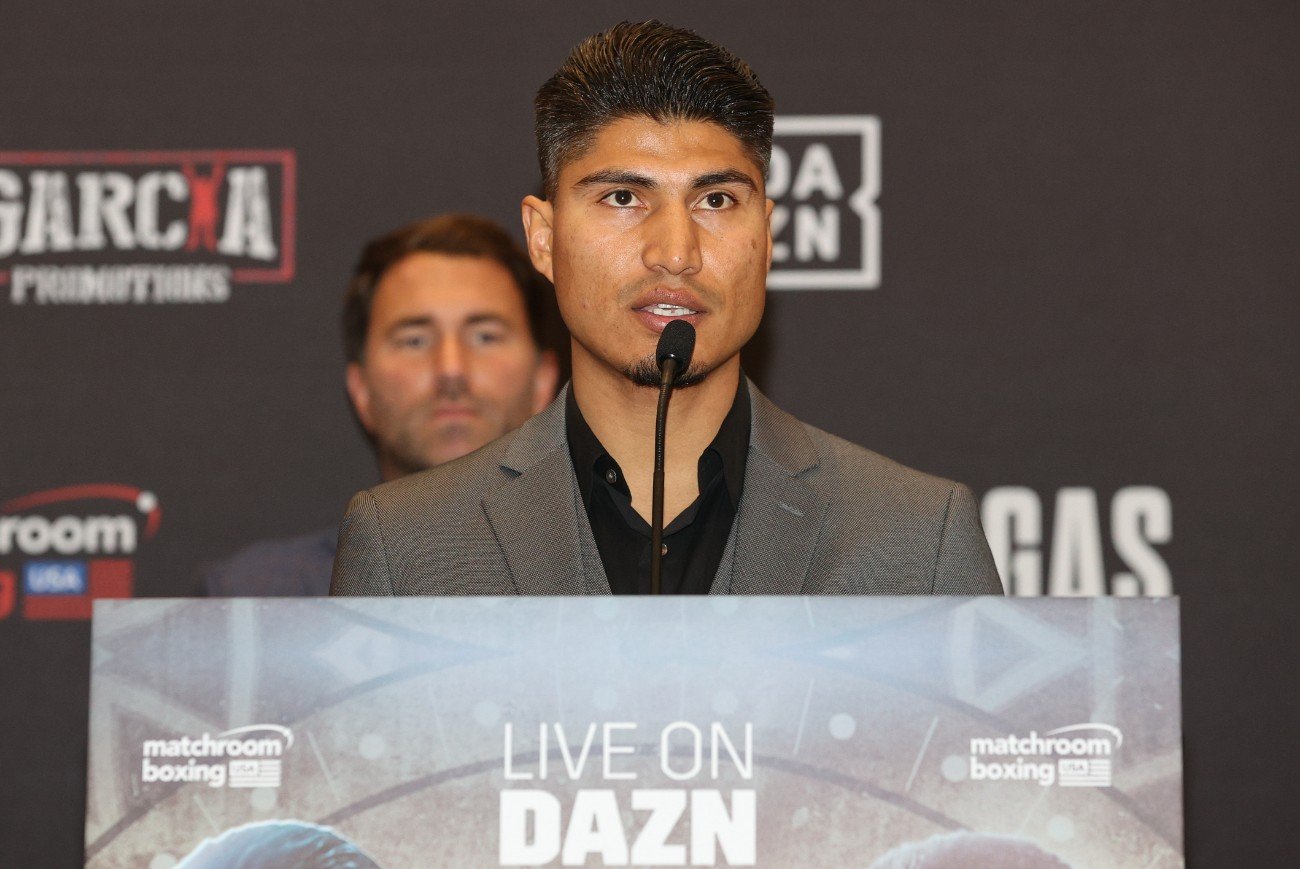 “If everything goes well on Saturday night, the idea and the plan is to continue those conversations with Team Regis, Team Prograis to try and secure that fight next.

“I’m also open and willing to fight anybody else that’s available, but the main name in front of me is Regis Prograis. We were already so close to getting that fight done.

“Him being the undisputed champion at 140. There’s no other fight as big as that. If that fight is offered in any way, I’m definitely going to take advantage of that opportunity.

“I feel I’m at the highest level that he is, and I think it would be a great match-up. I feel like I have what it takes to beat Josh Taylor. I think he’s a great fighter, a great southpaw.

“So why wouldn’t I take the biggest fight at this time? I think the fans would really enjoy that type of fight, and I would love that fight. If that fight is in any way presented to me, I’m definitely taking that.

It’s questionable whether Mikey will fight Prograis because he’s likely to look bad against Sandor on Saturday. If Mikey struggles against a fighter at Sandor’s level, he’ll probably want another tune-up.

The thing is, it doesn’t matter how many tune-ups Mikey takes at this point in his career. He’s gotten older, been inactive for too many years, and he was never a 140-pounder, to begin with.

This isn’t Mikey’s weight class, and Mikey started out at 126, and that’s where he was at his best. So what we’ll likely see is Mikey laboring to a win over Sandor and then saying that he needs more tune-ups before facing Prograis.

Will DAZN be willing to indulge Mikey for yet another tune-up? I mean, Mikey’s last fight against the over-the-hill Jessie Vargas was a tune-up, and, of course, the Sandor Martin fight is another tune-up. At what point does Mikey get back in there and start fighting quality opposition once again?

If I were one of the top brass at DAZN, I wouldn’t have agreed to place Mikey’s fight with Sandor in the main event.

That’s an undercard level fight in my view, and it’s on the level of Teofimo Lopez vs. George Kambosos Jr. type of non-marquee mismatch.

“He’s a very well-rounded fighter,” Mikey said about Taylor.”What I see are opportunities where I can do a little bit more than Josh sees in me.

“It’s very easy for somebody to see video of me, but when they get in the ring, they see there’s so much more that they didn’t see. That’s where I feel I have what it takes and have the advantage

“That [Sandor Martin] was one of the names that Eddie Hearn brought to my attention, and I gave the green light to all of them.

“He’s the one that went out to pursue whoever was available for the time frame that we were scheduling this fight in.

“So he landed on Sandor Martin as the opponent to take the fight. You see a video of me, and you see a simple stand-up guy with a simple jab and right hand.

“But ask any of my opponents if it’s that easy, and they’ll tell you it’s a whole another game. It’s subtle changes and subtle movements that make a big difference.

“That’s where I see myself with Josh Taylor. Josh Taylor is a great fighter, a great boxer, but I think there are opportunities there. There’s still room there for me to really take advantage.

“I’m sure he’s [Taylor] going to look for something big after that [title defense against Jack Catterall]. I’m sure he’s going to be looking for some big fights.

“If he can any way steer in the direction that he wants to take, he can always reach out in my direction because I’ll be available,” said Mikey.

It’s a horrible idea for Mikey to fight Josh Taylor because he’s likely to lose badly to this guy. To compete with a fighter like Taylor, you’ve got to be active and fighting the best. Mikey hasn’t been continually active for years, and he looked poor in his fights with Jessie Vargas, Errol Spence Jr., and Sergey Lipinets.

Many boxing fans would like to see Mikey fight Josh Taylor, but it won’t go well for the former four-division world champion.

There have been many years of inactivity for Mikey for him to compete with a talent like Taylor. Moreover, Mikey hasn’t beaten anyone of quality at 140 since he moved up to that division.

Mikey looked terrible against former IBF light welterweight champion Sergey Lipinets three years ago in 2018. That was a hard fight for Mikey.

After the fight, Mikey looked like he’d crawled out of a warzone. Lipinets puffed Mikey’s face up, leaving him bloody and looking in bad shape. I had the fight very close at the end.

Other than Lipinets, Mikey’s only other win at 140 was against an over-the-hill, weight-drained Adrien Broner in 2017. There’s no comparison to Broner to that of a talent like Josh Taylor.

“I got to give credit for Sandor Martin because it was a short notice situation,” said Mikey on his opponent.  “It was a four or five-week notice, and he was willing to do it.

“We’re happy that we’re able to get a fight. I’ve seen a little bit of video on him. He’s a good boxer; he’s a southpaw.

“That’s always a challenge in itself fighting a southpaw.  So, I know he’s going to come with everything he has to try and upset me.

“So I can’t take this fight lightly. That’s why I did all the training and all the sparring necessary to be in the best shape possible and be well-prepared for Saturday night.

“This is his big opportunity, probably bigger than a vacant world title fight.

“All eyes are on him in this fight, so he’s going to try and take advantage. “This is what he’s been waiting for,” said Mikey.

It probably doesn’t matter if Mikey is overlooking Sandor because this is a sick mismatch on paper. When you pool from lower-level opposition, as we see here with Mikey fighting a second-tier opponent, he can afford to overlook him and still win.

Sandor has been spinning his wheels virtually his entire career, facing nondescript opposition in Spain. Four years ago, Sandor tried stepping it up against fringe 135-lb contender Anthony Yigit, and he LOST.

Mikey saying he’s not overlooking an opponent would mean something if he were actually facing a decent contender like Subriel Matias, Shakhram Giyasov, Montana Love, or Brandun Lee.

That’s not what we have here in Sandor. This is an obscure guy who had beaten NO one and was found out when he tried fighting the fringe contender Yigit.

Sandor Martin wants to prove himself

He’s been European champion, and he’s ready to move on to stellar fights, bigger fights, and this is it.

“So this is it for him. So I can expect him to be the best he can ever be. But that’s also why I’m the best that I can ever be.

“I did not take this fight lightly. I know he’s a tricky southpaw. He can box, and he’s got good skills.

“For the general public out there don’t know anything about him. But that’s what he’s trying to do.

“Prove who he is. That’s why this is a good match-up, and that’s why I’m interested in a fight like this.

“I got to keep these younger kids in their place to show them where we are. This isn’t any lower-level competition. This is the highest level you can possibly get in boxing.

“The time frame needed to prepare and promote a fight like that wasn’t available with the scheduling of DAZN  and Matchroom.

“I spoke to Eddie [Hearn]. My understanding is that a budget for that kind of fight [against Regis Prograis]  takes a lot more to prepare and promote than the four or five weeks we had to promote this fight.

“We want to fight each other. But when you get in the business behind it, it wasn’t in our control.

“The schedules were booked, and there was only a small window of a date that’s available with four weeks to promote.  If it doesn’t make sense, it’s not going to happen,” said Mikey.

It’s challenging to see Sandor Martin as having any real chance in this fight, given that he’s only fought one halfway decent opponent in his career in Anthony Yigit.

The trouble is, Sandor lost to Yigit by a 12 round unanimous decision four years ago in 2017, and since then, he’s fought no-name opposition in Spain. Sandor has won his last nine fights but against unknown second-tier opposition.

If this is an opponent that Eddie Hearn dug up for Mikey to fight, you have to wonder WHY he agreed to it. Going from fighting Sandor to Regis Prograis is a MASSIVE leap up in competition, and Sandor isn’t going to help Mikey prepare for the likes of Prograis.

If anything, this will mess Mikey up because he won’t be ready to fight a talent like Prograis. Sandor would prepare Mikey to fight Yigit, who was recently blown out of the water by Rolando ‘Rolly’ Romero in getting stopped in the seventh round last July. If you saw that fight, you’ll know what I’m talking about. It didn’t even look sporting.

If Sandor had fought guys at Mikey’s level in the past and shown that he could compete with them, this fight would make sense. But since Sandor has failed to do that, there’s no point in Mikey fighting a guy at this level, especially in the main event on DAZN. Mikey vs. Sandor has mismatch written all over it.

Sandor will be coming up in weight from 140 to face Mikey at the 145-lb catchweight, making this fight even more of a farce. If Mikey doesn’t want to fight at 140, he should face a true welterweight. One of these guys would have been ideal: 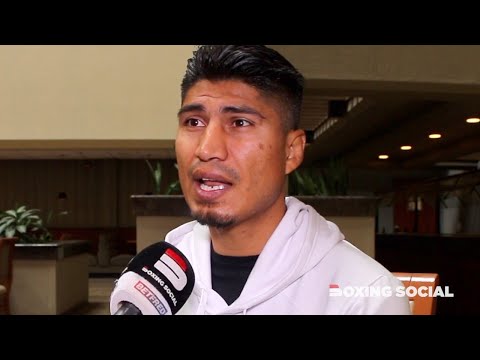 
« Was “Sugar” Ray Robinson Best at Welterweight or Middleweight?

Canelo Alvarez asks: Where is Golovkin? He’s done nothing »