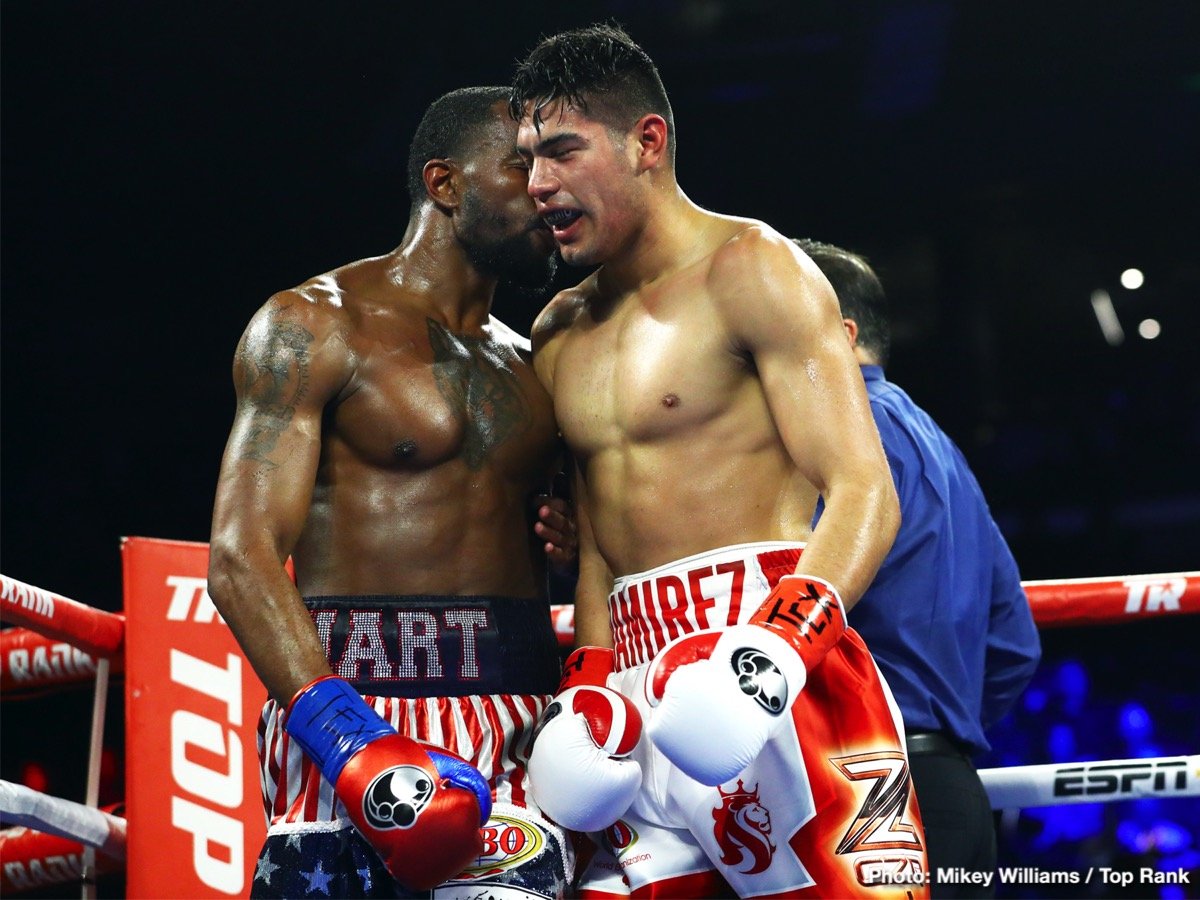 Ramirez would make five successful defenses starting a year later in April of 2017, defeating Ukraine’s Maksym, “Tiger” Bursak, 33-4-1, in Carson, CA. Next, he would defeat Jesse “Hard Work” Hart, 22-0, of Philadelphia, in September.

Ramirez started boxing at age 12 in Mexico. At age 19, he won his first minor title as a professional in his fifteenth fight stopping Rogelio “Porky“ Medina, 23-0, for the vacant WBC Youth Middleweight title in 6 rounds in December of 2010.

Ramirez would make six successful title defenses before winning his second and third minor titles in April of 2014, stopping Giovanni Lorenzo, 33-6, for the vacant NABO and NABF Super Middleweight titles in five rounds in Las Vegas, Nevada, in his twenty-eighth fight.

Ramirez, in his next fight, added his fourth title, the vacant WBO International title stopping Junior Talipeau, 20-2-1, in the first round. Then four more wins before winning the world title.

Ramirez, at age 30, is currently No. 2 in the WBO and No. 4 in the IBF and IBO light heavyweight rankings.

Through Ramirez’s manager David Suh we were able to make contact for some questions and answers.

KEN HISSNER: Is there anything scheduled for you at this time?

ZURDO: I’m waiting to hear back from my promoter Golden Boy. I’m ready for anyone. I know Bivol called me out on social media, and I’m 100% ready to fight him anytime.

KEN HISSNER: In your last fight, you stopped Sullivan Barrera, who defeated WBO champ Joe Smith, Jr., in 2017. Smith won the title in April and though just tested positive for Covid-19. You are ranked No. 2 for his title. Would you like that fight when he is cleared?

ZURDO: No doubt. I was the WBO Super Middleweight champ, and I’d like to accomplish the same in the Light Heavyweight division as well.

KEN HISSNER: Have you seen any of the world champs fight, and if you have, what is your opinion if you have any?

ZURDO: They are all special fighters, and I have taken a long road to be where they are. With that being said, I know I’m the best in the division.

KEN HISSNER: Anyone, in particular, you would like to fight among them?

KEN HISSNER: Were there ever any talks in the past of fighting Saul “Canelo” Alvarez?

ZURDO: I’ve sparred with him, and he’s a great fighter. I know the fans always speculate this one, and maybe it happens, and maybe it’s something that happens in the future. Two Mexican warriors in the ring will be a great fight for all the fans.

KEN HISSNER: After your two wins over Jesse Hart, you decided to move up to light heavyweight. Do you feel best at this weight?

ZURDO: This is my natural weight, and I feel stronger, faster, and better at this weight than Super Middle.

KEN HISSNER: You haven’t fought in Mexico since 2013. Where are you living?

ZURDO: I live in Las Vegas but have training camps in Los Angeles.

KEN HISSNER: I want to thank you both of you for taking the time for the interview.