By Jeff Aronow: Edgar Berlanga says Caleb Plant will use the same successful game plant that Floyd Mayweather Jr. utilized for his fight with Canelo Alvarez when he faces the Mexican superstar next month on November 6th at the MGM Grand Garden Arena in Las Vegas.

The unbeaten 168-lb contender Berlanga (17-0, 16 KOs) predicts that IBF super middleweight champion Plant (21-0, 12 KOs) will play to his strengths by using his fantastic boxing ability when he takes on WBA/WBC/WBO champion Canelo (56-1-2, 38 KOs) for the undisputed championship.

Berlanga says Plant will need to get Canelo’s respect early by sitting down on a few of his shots to make him hesitant about walking him down.

It’s not enough for Plant to move around the ring, hitting Canelo with shots that don’t have much on them. We saw what happened when former WBO 168-lb champion Billy Joe Saunders used the stick & move approach to fighting Canelo last May.

It worked for a while for Billy Joe, but once Canelo realized that he had nothing to fear from him, he walked him down and forced him to quit on his stool after round eight.

“Try to box him and use his jab, and stick & move like Floyd [Mayweather Jr.] did, like how [Erislandy] Lara did [against Canelo]. He’s going to try and use that same game plan to frustrate Canelo. It’s going to be a big fight.

“Not only that, you have to make him [Canelo] respect your power because if you’re punching off movement and you’re not really connecting with good shots, Canelo is the type of fighter that is just going to walk you down. He’s going to beat you up.

“With Plant, he’s going to have to sit down a couple of times to let him know like, ‘Listen, I’m here. You know, besides the boxing thing, I can also punch too,'” Berlanga said.

Plant does have good power when he sits on his shots, but he’s going to have to keep out of the way of Canelo’s powerful counter punches and body shots.

Canelo has a mighty right hand that he likes to use against fighters that stay on the outside. He’s accurate with that punch, and it’s going to be difficult for Plant to keep from getting hit by that shot.

“In two years, I just think for the fact that I’m a big 168, and not only that, I’m Puerto Rican,” said Berlanga about possibly fighting Canelo in the future. “You know that rivalry that Mexico and Puerto Rico have is huge and has always been something big for boxing.

“You’ve got Puerto Rico vs. Mexico, and you know how that is. That’s a big rivalry for boxing. I’m excited. Win, lose or draw; if he [Canelo] loses, we’re still going to make the fight happen.

“For sure, he’s another great fighter and another great Mexican,” said Berlanga about him fighting former WBC super middleweight champion David Benavidez in the future.

“That’s going to be another great fight down the line if everything makes sense, if the business makes sense, we’re going to make the fight happen,” said Berlanga.

Unless Berlanga is made the mandatory for Canelo in two years, he probably won’t ever get a shot at fighting him because he’s with Top Rank.

An easier fight for Berlanga to get would be against former WBC super middleweight champion David Benavidez. That’s also a more dangerous fight for Berlanga because Benavidez has the size, work rate, and youth to beat him possibly. He’s the same age as Berlanga at 24, but for more advantage in his development as a professional.

Berlanga will be fighting this Saturday night on October 9th against Marcelo Esteban Coceres (30-2-1, 16 KOs) in a 10 round fight on the undercard of Tyson Fury vs. Deontay Wilder III at the T-Mobile Arena in Las Vegas. 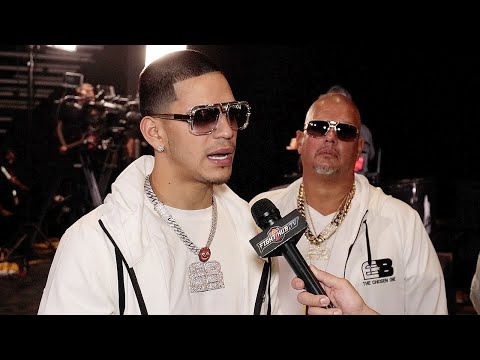