Benn, 24, is targeting one of the old former world champions Chris Algieri or ‘Vicious’ Victor Ortiz in his next fight. He doesn’t view the 33-year-old Avanesyan as someone that can help his career at the moment.

Avanesyan may have scared off Benn with his second round knockout victory over Liam Taylor (23-2-1, 11 KOs) last Saturday night at the SSE Arena, Wembley, England.

Taylor never stood a chance with Avanesyan, who dropped him in the first round and then stunned him with a huge left hook in the second round that led to the referee stopping the fight.

“We have a lot of respect for Conor Benn. Let me just say loud and clear. People are putting pressure on that you man’s shoulders, who I don’t agree with,” said Avanesyan’s manager Neil Marsh to iFL TV.

“We don’t care about Conor Benn. He’s just another boxer. The fact is, Conor Benn isn’t going to define our career.

“If Eddie Hearn wants Conor Benn [against Avanesyan], let’s do it. Ring me up; the fight can be made tomorrow. We’ll do it in a European defense.

“We’ll go into his [Benn] backyard, we’ll give him all English judges, we’ll let him have the home court, and we’ll let him do anything. Otherwise, the talk is irrelevant. We’re not interested.

“This is a respectful comment, and it may sound like it’s not. David [Avanesyan] is levels above Conor Benn.

“Conor Benn is developing very well, and I’m happy that he’s developing, but David would murder him. He would absolutely splatter him. That’s no disrespect,” Marsh said about his view that Avanesyan destroys Benn.

The way that Avanesyan crowds his opponents like Gennadiy Golovkin used to do when he was still an active and motivated fighter, he would be a lot of trouble for Benn.

We haven’t seen Benn fight anyone that pressures him, throwing body shots fighting him in close.

Benn usually likes to fight at a medium distance against fighters that don’t do much on offense. It would be a new experience for Benn to fight someone like Avanesyan that would attack him relentlessly with powerful shots.

It would be an excellent chance for Benn to show whether he’s cut from the same cloth as his famous dad Nigel Benn, but he might fall short. Conor hasn’t shown the same power, speed, or fierceness that Nigel did during his career.

Avanesyan is available for Benn

“I think Eddie Hearn is doing a good job with Conor Benn, and I think they’re slowly progressing him along,” said Marsh. “He’s doing big viewing figures; I get it.

“Hopefully, they’ll keep continuing the way he is, and I wish Conor nothing but the best. But unless there’s a fight offer, go away.

“We’re not interested. If you want to fight my man [Avanesyan], he now has a voluntary defense of his European title, pick the phone up.

“Stop talking s**** to everybody. Just ring me. Do something with a new promoter, but that will not stop the fight from happening. I’ve already had discussions. Just do it.

“Give the British fans what they want. Let me tell you something. That little Russian [Avanesyan] over there is adored by the British fans, and that’s because he’s a true fighting man.

“So if any true fighting man wants to step up and challenge, get on the phone,” said Marsh.

It would surprise many boxing fans if Benn did accept the offer from Marsh to challenge Avanesyan for his EBU welterweight title. That would show a lot of courage by Benn to take the fight, but it’s not encouraging that he’s saying he prefers Algieri or Victor Ortiz. 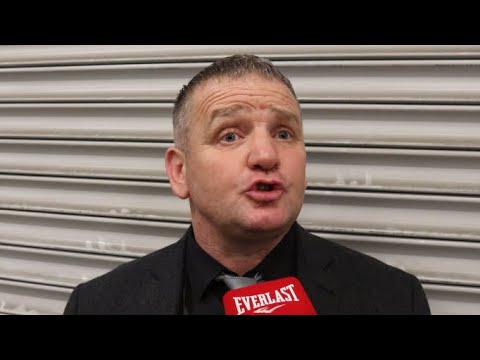 
« Andrade vs. Quigley, Akhmadaliev vs. Rios & Martinez vs. Arroyo on Nov.19th on Dazn

Anthony Joshua is 32, he’ not a rookie says Frank Warren »