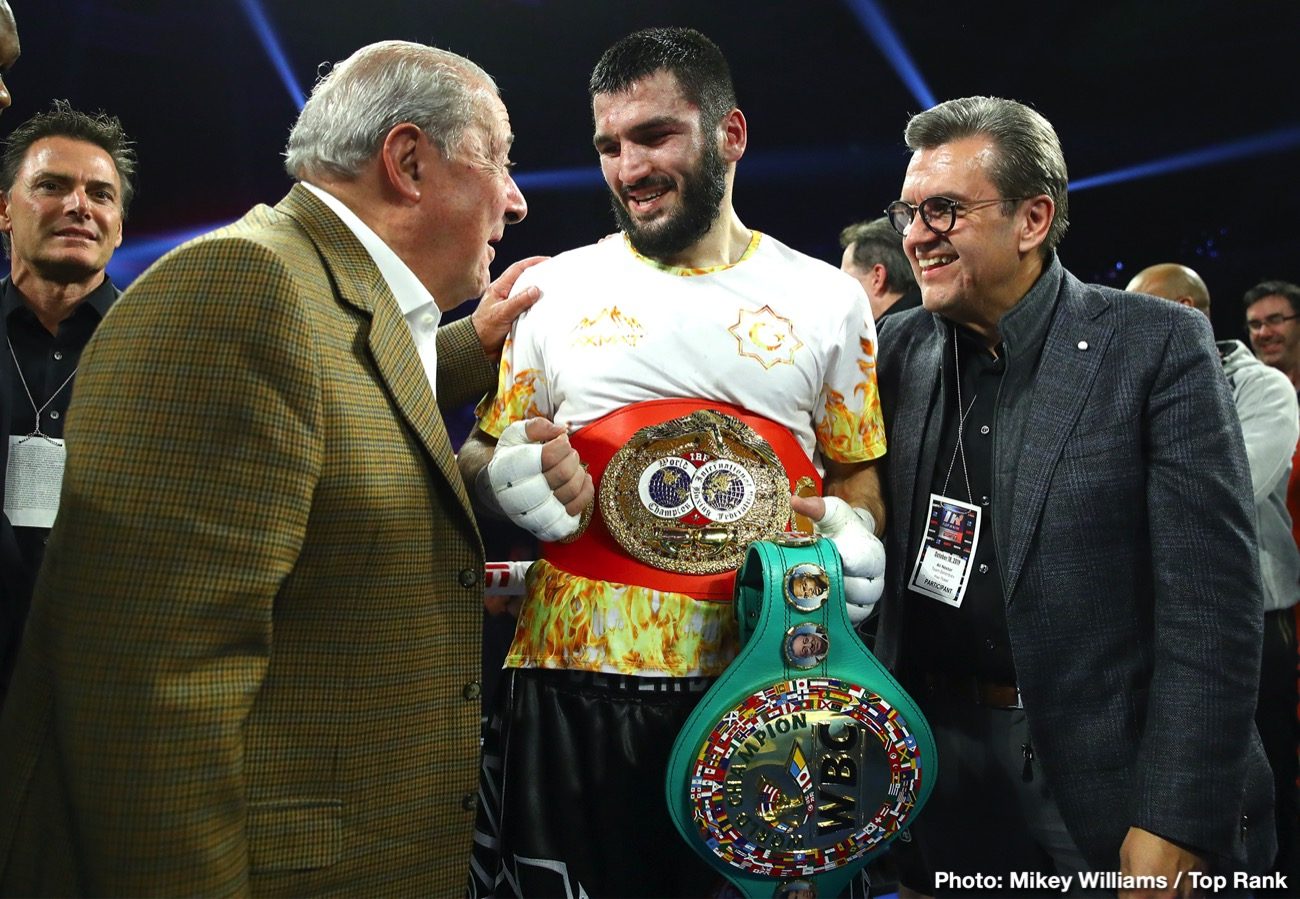 By Dan Ambrose:  Bob Arum says he spoke with Canelo Alvarez recently about him possibly facing IBF/WBC light heavyweight champion Artur Beterbiev next, and he might do it.

Whether Canelo makes that move will depend on his trainer Eddy Reynoso, says Arum.

If Reynoso believes that Canelo can win that fight against Beterbiev, he’ll give him the green light to take it. If not, it means that he doesn’t think he’s ready to face the talented Russian.

Interestingly, two years ago, when Canelo was fighting the faded past his prime Sergey Kovalev in 2019, Reynoso was asked why they’d chosen him over Beterbiev, and he said he believed that ‘Kovalev was the best fighter at 175.

You can take that comment from Reynoso back then to indicate that he didn’t feel that Canelo was ready for Beterbiev.

If Reynoso chooses to have Canelo fight a different light heavyweight or WBC middleweight champion Jermall Charlo, you must assume that he doesn’t believe he’s ready for Beterbiev yet.

Beterbiev is facing Marcus Browne (24-1, 16 KOs) on December 17th at the Bell Centre in Montreal, Canada. Presumably, if Beterbiev looks overly impressive in that fight, it’s possible that Reynoso won’t give Canelo the green light to fight him.

But if Reynoso wants Canelo to receive any credit for fighting Beterbiev, he’s going to need to do it soon.

The two-time Russian Olympian Beterbiev will be turning 37 soon, and he might end up losing to one of his contenders sooner or later. If Reynoso drags his feet until Beterbiev is 40, it would be seen as him and Canelo being opportunists.

“Canelo is blessed with a great boxing man as his trainer, Eddie Reynoso,” said Bob Arum to Fight Hub TV. “If Eddie OKs the fight, that means he believes Canelo has the talent to beat Beterbiev.

“If Eddie doesn’t Ok the fight,  it means Canelo isn’t ready for Beterbiev, and 175 for a puncher like Beterbiev may be a bridge too far.

“So, I don’t know if he’s thinking about it. Canelo sat next to me at the [Oscar] Valdez fight because they’re in the same camp, and I think he indicated to me that Beterbiev would be a good possibility.

“Whether it’s next or the future, I don’t know. Beterbiev is fighting on the 17th of December in Montreal against Marcus Browne, the #1 contender.

“But Beterbiev would want to make that match [with Canelo] obviously. I don’t know,” said Arum when asked if Beterbiev beats Canelo.

“Listen, the only guy that knows, and he can’t necessarily predict the outcome, is Eddy Reynoso.

“As far as Canelo is concerned, not even he knows [if he can beat Beterbiev]  because he’s a fighter, and he would probably agree to fight Tyson Fury.

“I would look at light heavyweights like Joe Smith, Beterbiev,” said Arum when asked who he would match Canelo against if he promoted him.

“A guy that is fighting at 160, but he could fight at 168, who I believe would be the toughest opponent at 160 and 168, is the kid that is fighting in November on the night before is Zhanibek [Alimkhanuly], the Kazakhistan boy. He is a real super talent, and they’re tough guys. Golovkin is a Kazakh,” said Arum.

It sure would be nice for Reynoso to give Canelo the greenlight already because he’s burned through three years of his career beating weak 168-lb champions. Fans didn’t ask Canelo to try and unify the super middleweight division.

That was him choosing to pick the lower-hanging fruit by opting to try and become the undisputed 168-lb champion in a division with three weak champions in Rocky Fielding, Callum Smith, and Billy Joe Saunders.

The fourth champion is Caleb Plant, and he’s not considered on the same level as David Benavidez.

As far as southpaw Zhanibek [Alimkhanuly goes, I doubt he can beat Canelo because he doesn’t have the experience.

Zhanibek has a very low punch output,  and he doesn’t fight often. Zhanibek has fought just twice in the last two years, and the best guy he’s faced as a pro is Rob Brant.

Zhanibek doesn’t have the experience and is not active enough to beat Canelo. There’s no chance of Zhanibek getting a fight against Canelo because he doesn’t fight often enough and is in the wrong weight class.

For Zhanibik to have a chance of one day facing Canelo, he’ll need to move up to 168 and star fighting three to four times a year against notable opposition. Zhanibek can’t keep fighting obscure guys if he wants to fight Canelo.

“He’s [Plant] going to give Canelo a fight. I think it’ll be an entertaining fight, but I must say, in my view, there’s only one winner, and that’s Canelo. But Plant is a good opponent for Canelo, and he’ll give him a fight.

“He’s [Canelo] one of the greatest Mexican fighters ever. Whether the greatest remains to be seen, but certainly, he belongs in the same category as the great Chavez. There’s no question about it in my mind.

“Canelo is the best of his generation, and he and Chavez fought at different weights, but he certainly deserves to be in the same category of greatness as Chavez does,” said Arum.

Canelo is not unbeatable at 160and 168, as we saw with his two fights with Gennadiy Golovkin. David Benavidez and David Morrell would likely beat Canelo

Is Shakur Stevenson afraid of moving to lightweight division? »