Tarver worried that Wilder’s quick-twitch muscle fibers may slow down due to him carrying the extra seven pounds of muscle that he weighed for his previous fight with Fury.

For Wilder’s last fight against Fury, he bulked up from 219 lbs to 231 lbs, and he looked considerably slower than he had in the past.

Now, Wilder has added another eight lbs and is weighing 238lbs, and that may be way too much for him to carry. It depends on how much sparring Wilder has done, and how long he’s been carrying the weight.

If Wilder has been weighing close to 238 for the last year and a half, it might not slow him down on Saturday night.

Fury will be defending his WBC strap against Wilder (42-1-1, 41 KOs) at the T-Mobile Arena in Las Vegas.

Wilder’s bulk could slow him down

“Nah, the guy is heavy anyway, he’s big, it don’t matter,” said Antonio Tarver to Fighthype on Fury coming in at 277 lbs on Friday and looking fat. “Anything under 300 lbs, he’s still effective. You saw that in the last fight.

“Wilder added on some muscle, he added on some weight, a significant amount of weight because I guess he felt he was a little bit too small. Now, is he going to use this weight to his advantage?

“A lot of times when you bulk up, it slows you down a bit. That quick-twitch muscle slows down a lot. Wilder is going to need to be fast and quick, a lot more than he was in the rematch.

“If that muscle doesn’t slow him [Wilder] down, he could use that to his advantage. My heart is with Wilder, I’m not going to sit here and lie to you. I have a love for American boxers, that’s all. We’re like on the same team, but we respect everybody,” said Tarver.

Tarver isn’t worried about Fury’s weight, believing that he would be effective up to 300 lbs. We’ll have to see if that’s the case.

Fury looked slow at 276 lbs for his fight with Sefer Seferi in 2018,  and he was about as fat in that fight as he was today.

“I’m rooting for Wilder, but my heart tells me Tyson Fury may have a little too much in the toolshed. He has too many tools.  If one thing don’t work, he can revert to something else.

“I don’t see Wilder has that many layers to him and his game. Whatever he starts with don’t work, it could get problematic for Wilder.

“I think Tyson Fury has more tools in the shed than Wilder, but I’m looking for a turnaround in the rematch.

Even though Fury wore clothes, his real weight is close to 277 lbs. You could tell from looking at Fury’s arms and midsection that he’s not in the best shape.

Fury has much better boxing skills than Wilder, and if one thing doesn’t work for him, he’ll switch it up.

On Saturday, Fury will probably come forward initially looking to walk down Wilder. If that proves to be too dangerous, Fury will spend the rest of the night boxing him and not taking chances.

If Wilder’s speed isn’t impacted by his weight gain, he could be a big problem for Fury. 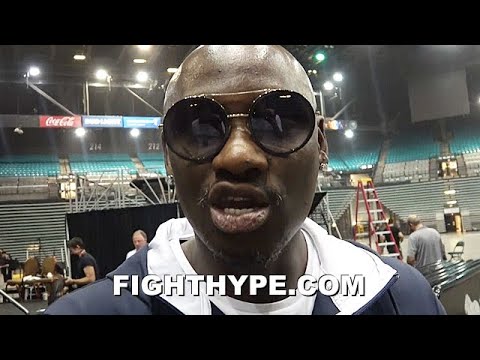 
« Caleb Plant responds to Canelo saying he’s going to break his jaw: ‘Going to have to back that up’