Wladimir Klitschko says Joshua can bounce back from loss to Usyk

Already, many boxing fans are saying that Joshua is over-the-hill, and he should pack it in after his loss to the former undisputed cruiserweight champion Usyk. Joshua isn’t listening to the fans, and he’s already activated his rematch clause to fight Usyk again.

Wladimir points out that he lost two back in 2003 & 2004 to Corrie Sanders and Lamon Brewster, and he came back to recapture a world title in 2006 and go on a nine-year run as champion before losing his titles to Tyson Fury in 2015 at the age of 39.

What was different about Wladimir coming back was that he didn’t fight anyone particularly dangerous to become a champion again.

Instead of Wladimir fighting Corrie Sanders in a rematch to avenge his second round knockout, his brother Vitali Klitschko fought the South African and defeated him. Had Wladimir fought the hard-hitting southpaw Sanders ago, it’s unknown what would have happened.

Joshua will have it tougher than Wladimir because he’s facing the guy that beat him in Usyk. As I mentioned, Wladimir didn’t fight Corrie Sanders to try and avenge his loss. His brother Vitali helped him by taking care of the hard work against Saunders.

“I remember my time. I lost two fights within a year in a row, almost in a row back in 2004, to bounce back and become one of the longest-reigning champions,” said Wladimir Klitschko to Sky Sports on Joshua being able to come back from the loss to Usyk.

“AJ still has his time, absolutely. It’s all about how to overcome this challenge.”

It’s questionable whether Joshua can beat Usyk in the rematch because he looked totally over-matched against the Ukrainian talent.

The technical ability that Usyk showed in that fight was slight years ahead of Joshua, and that’s not going to change in the next five or six months before the two met in a rematch.

Joshua seems timid now after his loss to Andy Ruiz Jr. in 2019, and he can fight like that against Usyk and expect to beat him. It’s understandable why Joshua is cautious about fighting aggressively against Usyk because he was getting nailed when he would throw shots.

In the championship rounds, Joshua was exhausted and no match for Usyk, who had a better engine. Joshua’s stamina problems will still be there in the rematch in early 2022, and he’ll be forced to fight at a slow pace to keep from gassing.

“Usyk made history from 2o12, winning the Olympic gold,” Wladimir continued. “I was watching Usyk winning the gold and AJ winning his gold.  Being undefeated for such a long time and winning all the titles as a cruiserweight and now with the heavyweight, he [Usyk] made history. This man is special,” said Wladimir about Oleksandr. 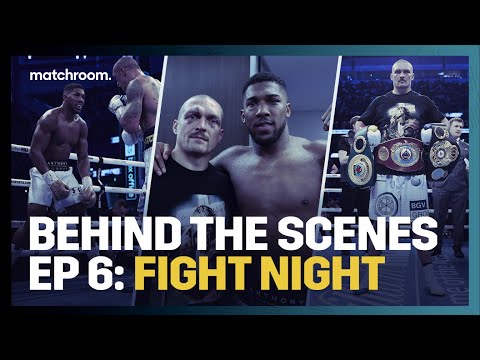