By Allan Fox: Teofimo Lopez says he expects to destroy his IBF mandatory George Kambosos Jr. with a first round knockout if/when the two battle it out. Teofimo (16-0, 12 KOs) is tired of listening to the Autralian Kambosos Jr. (19-0, 10 KOs) mouth off on social media and interviews, and he wants to shut his trap.

IBF/WBA/WBC/WBO lightweight champion Teofimo says that if he breaks the 28-year-old Kambosos’ eye socket, he won’t regret doing so.

Teofimo was already supposed to have defended against Kambosos, but a case of COVID-19 caused their fight to be moved to October 4th.

Triller Fight Club has decided to move the fight to October 16th at the Barclays Center in Brooklyn, New York. Teofimo has signed off on the move, but thus far, Kambosos Jr. has agreed to move the date. He wants to stay on the October 4th date.

Triller needs to move the Teofimo vs. Kambosos fight because they would have heavy competition from the Oakland Raiders vs. San Diego Chargers NFL football game on October 4th. It would be a bad idea for the Teofimo-Kambosos Jr. fight to go up against that game.

It sounds scary what Teofimo wants to do to Kambosos when he finally gets to fight him. Unfortunately, the fight has failed to create much interest from boxing fans, and it’s unlikely to bring in more than a small handful of PPV buys.

You can argue that Triller made a colossal mistake in bidding $6 million to land the Teofimo – Kambosos fight, as it’s not one that they’re likely to make their money back.

It would make sense for Triller to bid on a fight between Teofimo and Vasily Lomachenko, Ryan Garcia, Gervota Davis, or Josh Taylor than his title defense against Kambosos.

If Kambosos elects not to sign off to move the Teofimo fight to the new October 16th date, Triller will reportedly lose the rights to stage the contest.

It will then revert to the next highest bidder in the purse bid auction from last summer, and that would be Matchroom Sport. They’ll place the Teofimo-Kambosos fight on DAZN, which would be suitable for the subscribers.

“I’m going to make sure you get a beating out of this, for sure, because you took it to a whole different personal level. I call it in the first round, man,” said Teofimo in predicting a first round stoppage of Kambosos.

This fight is a huge mismatch on paper, as Teofimo is bigger, stronger, faster, and viewed by many boxing fans as more talented than Kambosos.

The way Teofimo looked in his wins over Vasily Lomachenko and Richard Commey, Kambosos has little chance of winning. 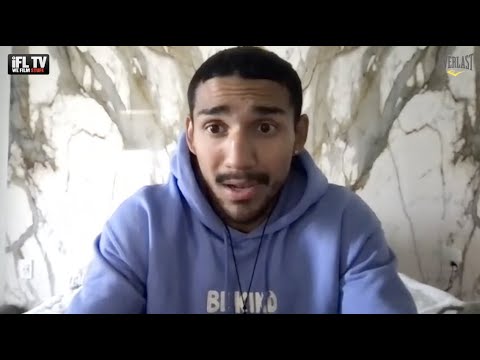 Wladimir Klitschko says Joshua can bounce back from loss to Usyk »