By Chris Williams: Last Friday night, we witnessed a classic robbery with Oscar Valdez (30-0, 23 KOs) being given a gift 12 round unanimous decision over the brave challenger Robson Conceicao (16-1, 8 KOs) at the Casino Del Sol in Tucson, Arizona. The way the three judges scored the fight, Conceicao never stood a chance of winning.

Valdez’s face looked like nine miles of bad road after the fight, bumpy everywhere from the bruises, and nose looked swollen, blue, and possibly broken.

Chris Williams’ score: 117-111 for Conceicao.  Conceicao wants – and deserves – a rematch after the controversy of the results of this fight. But if there will be a rematch, it needs to take place in a neutral venue.

Should Conceicao have been penalized?

Placing the fight in Arizona, the stronghold for Valdez, put Conceicao at a HUGE disadvantage from the jump.

There was no way on Earth that Valdez deserved the win last night unless you were scoring it with your eyes closed because Conceicao put in a masterful performance in outboxing Oscar, making him look bad every step of the way.

Conceicao tapped Valdez behind the head to let him know to stop him in the kidneys when the two were in a clinch.

Punching in the back is considered illegal in boxing, so Conceicao merely let Valdez know that he wanted him to stop him in the back with rapid-fire shots while the two were in a clinch.

Instead of the referee stopping the action to tell Valdez to stop hitting Conceicao with punches to the kidney area of his back, he docked the Brazilian a point.

Again, Conceicao was never warned previously by the referee about rabbit punching, and for a good reason, he wasn’t throwing them. The only reason he threw it, in this case, is because he was getting hit in the back by Valdez in plain view of the referee.

Not surprisingly, the judges gave it to the A-side fighter Valdez despite being outboxed basically the entire 12 round fight apart from a few middle rounds.

Valdez’s face looked like he’d been run over by a truck by the 12th round, and it was laughable to hear him complaining about Conceicao supposedly “running” from him.

That was running that did the damage to Valdez’s face. Those were powerful fists from the Brazilian talent, who was jabbing Valdez’s head off from start to finish.

In the first five rounds, Valdez, 30, got off to a bad start, getting worked over by the three-time Olympian Conceicao.

“Thank God, I got the victory and can move on to bigger and better things,” said Valdez to Fighthype. “I had to go after him because he started moving, so I had to put the pressure on him.

“I don’t want to make excuses, but it was a rough week with all the criticisms. At the end of the fight, Conceicao was yelling at me and pointing his finger at me, saying he won the fight.

“People don’t know the background that I did nothing wrong. I’ve always said I’m a clean fighter. For people to call me a cheater, it’s very heartbreaking for me.

“One day they call you ‘champion, and the next day, they call you a ‘cheater,’ point in your face, and try to bring you down. It’s not fair because I work really hard in the gym.

“We’re asking already for a hair sample so we can clear my name. I didn’t take nothing, and I’m 100% clean. Hopefully, the truth will come back soon, very, very soon.

“I got really upset because of all the criticism this week. I’m trying to prove that I’m a clean fighter,” said Valdez.

“The winner of Jamel Herring and Shakur Stevenson. It’ll be a great technical fight, and we’re going to be watching because Bob Arum says he wants that fight for 2022.

“Everything has to be better in terms of the focus,” said Valdez when asked if he must be better for him to beat the Herring vs. Stevenson winner.

I hate to say it, but the ONLY way Valdez will be able to prove he’s a clean fighter is for him to sign up for VADA testing year-round. Also, if Valdez tests positive again, it would help if he doesn’t use the same excuse in blaming it on drinking herbal tea.

Valdez is probably too late to prove anything to the boxing public, as the horse is already out of the barn. Fans have already heard the news of the positive test for Valdez, and they feel his “herbal tea” excuse was laughable.

If anything, Valdez’s excuse was the equivalent of throwing fuel on the fire. Instead of it helping Valdez, it made him look worse in the public’s mind. 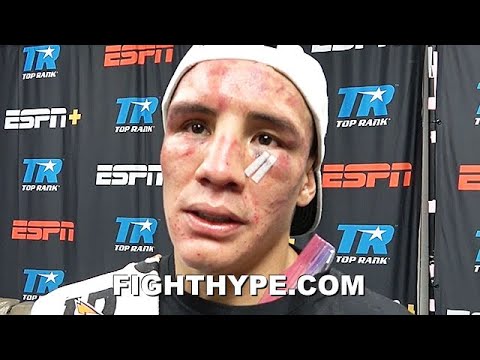