By Barry Holbrook: Matchroom Boxing promoter Eddie Hearn was utterly devastated after watching his crown jewel of his stable Anthony Joshua get systematically outboxed in a clinical manner by Oleksandr Usyk on Saturday night in a 12 round unanimous decision defeat. 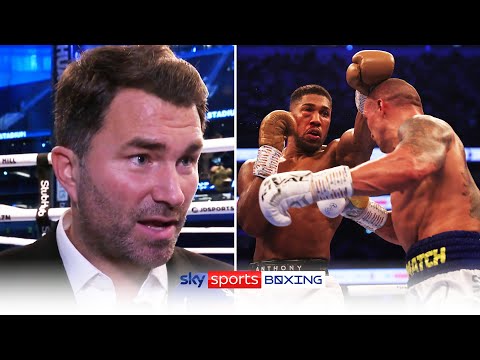 Fighting in front of 70,000 of his diehard faithful at the Tottenham Hotspurs Stadium, IBF/WBA/WBO heavyweight champion Joshua (24-2, 22 KOs) came out flat, out of his depth attempting to box with a boxer in former undisputed cruiserweight champion Usyk (19-0, 13 KOs).

In the aftermath of the fight, Hearn’s voice cracked while speaking, sounding like he wanted to weep in discussing Joshua’s loss. You couldn’t blame Hearn if he did burst out in tears because Joshua’s loss to Usyk was truly devastating.

Should Joshua take the rematch?

With this defeat, Hearn and Joshua have an important decision to make. Do they push ahead and chance it by fighting an immediate rematch with Usyk, as they did after Joshua’s loss to Andy Ruiz Jr, or do they move on?

If Joshua takes the rematch with Usyk, he could lose and wreck his career. I mean, Joshua’s career wouldn’t be over, as he would still be a highly popular fighter in the UK, but the money wouldn’t be as good.

“Yeah, I spoke to him. It was a tough fight, a grueling fight. He’s not quite talking the way you’d expect him to talk at the moment,” said Eddie Hearn to Sky Sports Boxing about Joshua following his defeat tonight to Usyk.

“Obviously, devastated and already talking about training again. They want to look at the eye socket. He says he’s fine, but a devastating defeat obviously.

“Congratulations to Oleksandr Usyk, what a fighter. He put on a great performance tonight, and the better man won. That was always the danger,” said Hearn.

An eye injury for Joshua will likely mean a lot of downtime for the star, and who knows if he’ll be able to come back from it?

Assuming that Joshua doesn’t have an eye injury, he needs to wait until the first quarter of 2022 before fighting Usyk again.

There are too many changes Joshua needs to make in his game for him to rush back into the ring for a rematch in December.

Joshua tried to be too technical

“You overthink the fight, you try to be too technical, you don’t use your attributes and you don’t make your mark early enough in the fight.

“Usyk is very fit, he’s got great feet, he threw a lot of punches in there tonight. It was all the things you worry about against a fighter like Oleksandr Usyk,” said Hearn.

Joshua was warned by many people ahead of the fight tonight not to try out-box Usyk, as that would be playing to his strengths. Hearn wanted Joshua to use his physical attributes to overwhelm Usyk with power and size.

Instead of listening to Hearn, Joshua did it his way and boxed Usyk, and he was no match.

AJ will want a rematch

“He exercised his style very, very well. He was probably a bit more aggressive than anticipated, which I think did him well,” Hearn said.

“I mean, in the first 10 seconds he came out with a left hand straight down the pipe. He was really good tonight, and he’ll go down in history.

“No complaints from AJ. He’ll get up and go again. He’s already talking about training on Monday, but it’s a tough defeat. This was getting beat by a pound-for-pound great fighter.

“We’ve been here before at Madison Square Garden [by Andy Ruiz Jr]. This was being beat by a better man on the night, and you have to make some big changes in the rematch to avenge that defeat.

“It was a tough defeat. I had it reasonably8 close in the eighth or ninth round, and Usyk just ran around with it 8-4 or even 7-5, the best scenario to AJ. But AJ was the deserved winner,” Hearn said.

Joshua will probably think that because he proved that he could avenge his loss to Andy Ruiz Jr. in 2019, he’ll be able to do the same thing with Usyk.

It’s a different situation this time. Ruiz Jr. pigged out and gained a bunch of weight after his win over Joshua in June 2019, and then didn’t take his training seriously for the rematch.

Usyk isn’t going to slack off, party, eat like a pig and get fat. He’s going to stay focused and work hard for the rematch with Joshua.

As a result, Joshua will be facing an even better Usyk in the rematch than he did tonight, and it could badly for AJ.

Hearn should be the voice of reason by steering Joshua to safer waters by letting him know that he needs to get a few fights under his belt before facing Usyk again.

“He’s [Joshua] got to make changes in the rematch because if that happens again, of course, he’ll get beat,” said Hearn.

“He’s got to impose himself early. It’s going to be really difficult because Usyk’s confidence will be sky-high, but when you get to the level of Anthony Joshua, as we saw in the Ruiz defeat, there are no 10 round fights and warm-ups.

“He chose to take on a pound-for-pound great. It didn’t work out, but he should get credit for that. He stayed on his feet, I’ll give him credit for that as well, but it’s sport.

“He was beaten by the better man. Congratulations to Oleksandr Usyk. This is his life. He’s already talking about being in the gym. He lives and breathes boxing.

“Boxing saved him, boxing made him, and he won’t fall out of love with the game. When you do, that’s the time to walk away from the sport,” said Eddie about Joshua.

AJ needs to make a lot of changes with his game, and the only way he can do that is to take warm-up fights, preferably against Eastern European heavyweights.

It’s no use to Joshua if he fights a bunch of guys with an American fighting style, who are completely different than Usyk. He’s got to take warm-up fights against Eastern European fighters.

“The desire is still there and it will still be there,” Hearn continued about Joshua. “But you can have desire, but you’ve got to be good enough.

“I know he’s good enough. That performance was not [good enough]. He’ll know when he watches that back.

“That, to me, was an average performance from Anthony Joshua. There is so much better than that fight, but he’s facing a pound-for-pound great and this is what happens in the sport.

“You criticize Joshua, ‘Oh he got beat,’ but he’s facing the best consistently, So you can’t have it both ways,” Hearn said.

Joshua can come back from this and beat other heavyweights, but probably not Usyk. Let’s face it, Usyk’s fighting style is all wrong for Joshua, and he’ll likely beat him no matter how many times they fight.

It would be smart for Joshua to admit that Usyk is someone that he’ll never beat, and move on. There are guys that can probably beat Usyk in the heavyweight division, but Joshua isn’t one of them.

Once Usyk is beaten by someone, Joshua can then face that fighter and likely beat him. By doing that, boxing fans will forget about Joshua’s loss to Usyk.

AJ will go back to the drawing board

“For me, that’s what fighters should do, take on the very best. He did it and tonight he came out second best, but respect to him for taking on Oleksander Usyk.

“Respect to Oleksandr Usyk. It was a high-level fight, and there’s a new unified heavyweight champion. There’s no point sulking about it.

“Like any bad news, you brush yourself down, and you shake the other man’s hands. ‘Congratulations, you were the better man. I go back to the drawing board, I rebuild and I go again.’

“That’s what he will do. He’s a great guy, but tonight belongs to Oleksandr Usyk,” said Hearn.

There are a whole lot of changes that Joshua needs to make in his game if he wants to beat Usyk. This writer doesn’t think it’s possible. 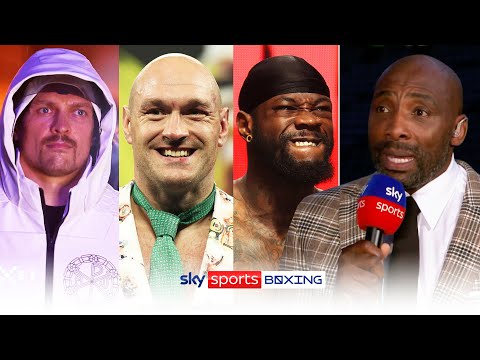